Art thriller studies the obsession to possess a soul

A grand temporary structure called the Crystal Palace is being built for the Great Exhibition of the Works of Industry of All Nations. 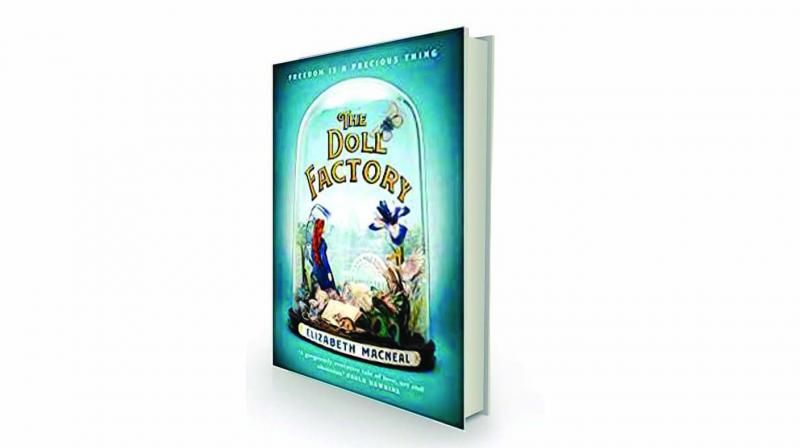 The Doll Factory is a thriller set against the backdrop of Victorian England, specifically London in 1850-51. Preparations are in full swing for a wildly ambitious international exhibition at Hyde Park, organised by Prince Albert (husband of Queen Victoria) and Sir Henry Cole (civil servant and inventor).  A grand temporary structure called the Crystal Palace is being built for the Great Exhibition of the Works of Industry of All Nations.

The public frequently stops to stare and wonder, artists gaze and dream about their works being displayed there. One of them is Silas Reed, taxidermist and owner of the Shop of Curiosities Antique and New. Silas's skills as a taxidermist go back to his childhood days of drudgery at a factory, where he earned a little on

the side by selling tiny stuffed dead animals to his factory owner for his wife’s display cabinet. Victorian ladies had ghoulish tastes, to say the least-but they are not Silas’s only clients when he moves to London as an adult: artists demand his creations too, for how can you make an animal or bird sit still?

It is at the site of the Crystal Palace that Silas’s deep insecurity and yearning for artistic recognition takes a backseat to a new obsession: he catches sight of a red-head who reminds him of his childhood friend Flick who disappeared one day, never to be seen again. He finds out that her name is Iris and that she works at Mrs Salter’s Doll Emporium. They have an acquaintance in common-Albie the delightfully Dickensian urchin who finds dead animals for Silas, and sews clothes for the dolls at the factory. The stage is set for the stalking games to begin.

Iris has enough problems of her own without this added horror. She feels trapped at the doll factory — she has always wanted to be independent with a little shop of her own, and the freedom to paint. Her twin Rose, who works alongside her, has been remote and unpleasant since small pox scars cruelly snatched her beauty and the love of her life away.  Iris is always uncomfortably aware that Rose, who once was much prettier than her, is jealous of her unblemished skin and the possibility that gives her of an escape through marriage.

Interestingly, Iris has been noticed by someone else too: artist Louis Frost, a member of the much scoffed at Pre-Raphaelite Brotherhood (here Macneal gives us glimpses of the Dickens we have never read — his reviews of the arts scene in London, and particularly scathing ones of pre-Raphaelite artists).  Louis badly wants Iris as a model for his new painting, and gets his elegant sister to persuade her-no easy task because being a model in Victorian England was akin to being a street worker, why even housemaids sneered at them! Iris finally relents on condition that Louis teaches her to paint. Breaking ties with her morally outraged parents is worth her escape from the doll factory.

Friendship gradually blossoms between them, and Iris find the differences in their social standing uncomfortable. Louis tells her a little about himself, and when he tries to coax details of her life in return, Iris clams up: “It isn’t that she wants to be secretive, but how can her history begin to compare to his? It seems as if her life was charcoal before, and now it takes on the vividness of oil paint. How can she tell him that she has seen little but the inside of a shop, done nothing except rise at five each morning and pass through each of her duties as if sleepwalking? She is sure he has never smelled the vinegar of washing or turned the wheel of a mangle.” Eventually friendship turns to love, the best literary love ever: star-crossed!  Iris finds herself in another prison, one of her own making.

Obsessive Silas can never be forgotten, though: he’s making his plans and diligently doing his homework. A sense of foreboding never leaves you, it clings to almost every page and lurks till the very end.

This, however, is just the thriller part of The Doll Factory. It’s much more than a gripping story about an unhealthy obsession: aspirations, love and a strong flavour of Victorian England lift it above the ordinary. History is not just a dull backdrop in this novel — it adds a rich texture that becomes all the more vivid when a few of the most famous Pre-Raphaelite artists are brought to life: William Holman Hunt, John Everett Millais and Dante Gabriel Rossetti (poet, illustrator, painter, translator and the founder of the brotherhood). Lizzie Siddal, former shop girl, model, aspiring artist and Rossetti’s wife in later years makes an appearance too. Which makes you wonder if Rossetti’s model was Macneal’s model for Iris. Loosely based, of course, because Iris has been given a strong identity and history of her own. Louis is no Rossetti, though: he comes across as a wonderful person with a pleasing sense of humour, but is disappointingly weak.

You can take the novel as it is or make it far richer for yourself with a few trips to Google. So worth it, when you discover that some of the famous writers who attended the Great Exhibition at Hyde Park included Charlotte Bronte, Charles Dickens, Lewis Carroll, George Eliot, Alfred Tennyson and William Makepeace Thackeray.