Book Review | Fables study climate, capital and the flawed beauty of our lives

Dangerous Pursuits demonstrates the writer’s depth of thought and breadth of skill. We float effortlessly from satire and humour to poetry 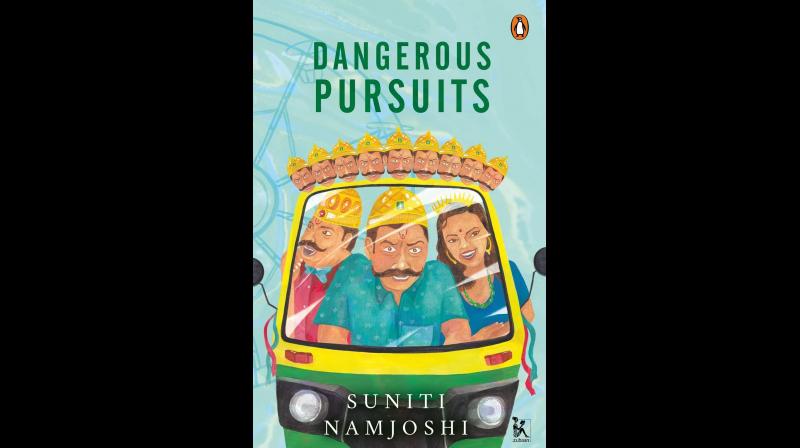 One of the world’s foremost feminists, Sunita Namjoshi remains not known enough in her native land. And as anyone who has read her knows, she is not just a feminist but also a writer of children’s stories, a poet and a fabulist. And sometimes, usually even, all those together.

I read the Blue Donkey Fables and The Legend of Mayadip in the 1980s and lost track of Namjoshi after that. Until the Museum of Colour, UK, included her in a “respect due” exhibition.

The fault is mine, because Namjoshi’s featherlight touch as she gently pulls apart old entrenched ideas with her humour-filled and light satire is invaluable and worth pursuing. Especially in dangerous times where we are being pushed to regress and fill our minds with misinformation and past glory and are being shepherded into narrow streams of thought.

Dangerous Pursuits is a collection of three reinterpretations, recreations if you will. “Bad People” is the voice of Ravana, as he tries to explain his position and understand himself, as he and his siblings Kumbhakarna and Shoorpanakha or Kumbh and Shupi, set off on a new adventure, in today’s world. Climate change, capitalism, political chicanery and stereotypical gender roles are all up for scrutiny.

Like in any good fable, you know you are being tested. And you know that this is an allegory for our times. You know that we all have contradictions and different dimensions within us. And like all good fabulists, Namjoshi makes us question ourselves and our rigidities, even as we laugh at the situations which these famously ‘bad’ people find themselves in.

From the Ramayana, Namjoshi delves Shakespeare’s The Tempest. The character of Caliban has long been troubled critics and readers. His enslavement by Prospero has made him a symbol of all those enslaved. Also intriguing is his “witch” mother Sycorax, whom Namjoshi has also written about.

But first, Ariel — the mischievous fairy figure from The Tempest — and Sycorax feature in our second more contemporary fable, “Heart’s Desire”. Age, longing and desire are up for examination in this story about the vast gaps between what we want and what we get.

“The Dream Book” changes form from fable to play and Shakespeare’s characters from The Tempest, both reinvent themselves but also question the roles set for them by their maker. Or, that is Namjoshi’s creations present a self-awareness that makes us question our own fixed positions. Patriarchy, racism, subjugation, masculinity, they’re all up for questioning.

“The whole of experience is made up of words, but they have to be spoken” says Caliban.

Dangerous Pursuits demonstrates the writer’s depth of thought and breadth of skill. We float effortlessly from satire and humour to poetry.

Zubaan has also published other works by Namjoshi including The Fabulous Feminist, a collection of writings.

It is time that India not just rediscovers on a wide scale but also celebrates one of our best. We need so badly her magical combination of satire, humour, wit, lyricism, poetry and song.