An unflinching look at death, celebrating beauty amid loss

They are trying to show their past avatars as functional members of society. 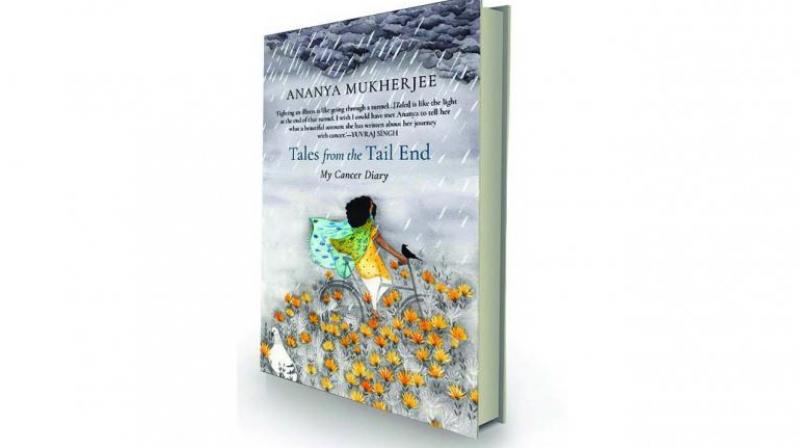 Ananya Mukherjee passed away last November from cancer. Imtiaz Alam, the author’s friend and batchmate at SIMC (Symbiosis Institute of Mass Communication),  remembers: “A few months before her death, she started writing on a range of topics. Her writings were gold: humorous, evocative, unflinching. I insisted that she should publish them in a book. This was going to be no ordinary book; it would be a life-changing one for generations to come. At a literary festival, I met Ravi Singh of Speaking Tiger and showed him one of her pieces on my mobile phone. Ravi immediately awarded her the book contract. While undergoing her chemo sessions, Ananya continued to pen down her pieces. She said it gave her new energy whenever she did so. She completed her manuscript and died 18 days before its publication.”

Excerpted below are three chapters from Mukherjee’s book, Tales from the Tail-End.

Tonight I Want to Tell the Best Friend: First they take me out to fancy dinners and dances. Then they make long conversations into starry nights. Afterwards, I am indulged with elaborate and utterly unviable life plans.

Even after cancer strikes, some romance continues to dribble. Enthusiastic after-getting-well dreams are laid down and talked up. Some compassion tugs at their hearts or loins (whichever is deprived at the time), and I continue to be at the receiving end of affection.

Then in the aftermath of prolonged illness, I am dropped. Aftermath — after the mathematics has been done. I am slipped out from the mainstream. Made irrelevant for my non-participation in everyday life. In its rigours, joys, sorrows, sexiness and dailiness. I am incapable of being fancied any more. Or made longrange plans with.

I am dropped but not discarded completely. (They are god-fearing people with an irrational fear of karma or what they think it is. Memories and affections are different things altogether. They are clever, they know for these there is no higher appellate.) So now they engage me in cursory health discussions. Encourage me to take up duties more in sync with my affliction. ‘Keep company with other ailing or retired people’. ‘Join support groups’. ‘Crusade for a cause’. ‘Meditate’. (Or paint on glass to remain calm.) The message is — stay coiled and sedated.

But how do I douse the fire that rages on in my heart?

I remember an ongoing conversation with the best friend for many years now. Love is the world’s oldest and most well-orchestrated con job, I always told her. She told me I had hardened up. I didn’t mope on being turned down. I didn’t yearn in spring. I didn’t sigh at poetry. I didn’t hang on to lovers’ coat-tails. I could just sit with my hands folded on my lap and bide my time for people to return or go to hell.

‘You have turned into an Old Goddess,’ she had gently accused. ‘Clever and demanding blood; unruffled and detached.’

Tonight, I want to tell the best friend that I’m no Old Goddess.
Tonight, my heart is broken by the world that has moved on.
Tonight, I lick my wounds in solitude.
Tonight, I think of Neruda and his saddest lines.

Khuddar and Deewar (not starring Amitabh Bachhan): In the hospital, I make many acquaintances. We spend several hours chatting about this and that, while getting chemoed, waiting for check-ups, queuing for tests etcetra. In these exchanges, many a time, my cancer comrades thrust their phones at my face. First, I think they are showing me their shiny new Xiaomi phones. I sing praises wholeheartedly. They give me disappointed looks. So I add an encouraging comment or two about Chinese manufacturing. Then I realise they are trying to show me something else. They are showing me their pre-cancer photos and videos. When they had long hair, or just hair in the case of men. When they wore lipstick or had smart moustaches (some women had them too). Photos of how well, healthy and active they looked. I wonder why they show me their photos when it obviously makes them a shade despondent. Then it strikes me.

They are trying to show their past avatars as functional members of society. With hair, eyebrows, jobs, egos and physical strength.

Over time as our physical strength wanes, we become unable to fend for ourselves. Soon, the world starts looking at us as infirm and dependent on doles — physical, emotional and financial. Some think of us secretly as invalids. Some not so secretly. It makes us reconcile to the reality that we need help. It strips us of our egos.

Hence, my comrades carry their photos around. Photos from another lifetime. A family jauntily going off somewhere in a pack. A man laughing heartily, baring his fangs, who now has pipes sticking out of his mouth. A woman beaming confidently at a child’s birthday party, complete with messy streamers and a crooked homemade cake, now dependent for basic things like cooking food and taking a bath. A man standing on a hillock in a striped sweater, holding his wife’s hand, hands that wheel him around now.

To bridge this dashing past and despondent present, I come up with an idea. The hospital should pin identity cards on us not with photos of us as we are now, but from our past.

Like everyone else, I take time to accept this reality of my various inabilities. I try to run errands, pay bills, file insurance claims, work some and throw some oldtime attitude around. When my strength fails, caregivers try to tell me I shouldn’t push myself (the husband adds that a toothless person shouldn’t think of eating steak). I do a bit of yelling, asking everyone to back off with their alms, and see how well I handle everything. Turns out I am a cat’s whiskers no more. I am just airy, penniless, proud and now incapable of managing on my own.

In the end, I buckle down and variously eat crow, humble pie etcetra. But not before rolling my eyes and saying — ‘Main aaj bhi pheke hue paise nahi uthata’.

Mothers with Malice: One of the perks of my illness, I had hoped, would be sweet, gentle loving from all quarters, especially on the home turf, ruled currently by my mother. She behaves like a wounded lioness instead. She rages on, she despairs, she cares. In that order.

Mothers are most likely human beings. My own demonstrates signs of being made of flesh, blood and feelings. I’ll touch forty in a year and this one still chides me, feeds me, overrides me, gets bored of me, shirks me (her perennial responsibility) and often manipulates me. Then she turns around and flings at me a golden web of indescribable love and weaves it tightly all around. From this, there’s no escape. For her or me.

Mothers are also dangerous people. Mothers in post-partum depression are known to smother babies. Mothers can take on lovers. Mothers can ambush their blood-sucking dependents by walking off in search of golden horizons. Mothers can be audacious, they can lay claim to their own life. Scorned mothers can be vile and unforgiving.

Mothers have been choking slowly. Five thousand years of our culture has turned them into shrine-worthy goddesses. To be venerated. Prostrated before. All the while, expecting them to radiate gentle goodness in the face of calamities like suffering children, growing dullness in their souls, an acerbic, callous society perennially watching for slip-ups. And after all this, they are cast away in the waters once their season is over.

If we must make our mothers into shrine-worthy clay goddesses, let us build them up with a margin of errors. Like a little chink on one shoulder or a minor design flaw; a small structural mistake (like the head slightly out of place); a crack running through the back or some scraping of paint. This will give them breathing space.

Till then, my own will continue to give me heaven and hell for being sickly all my life.