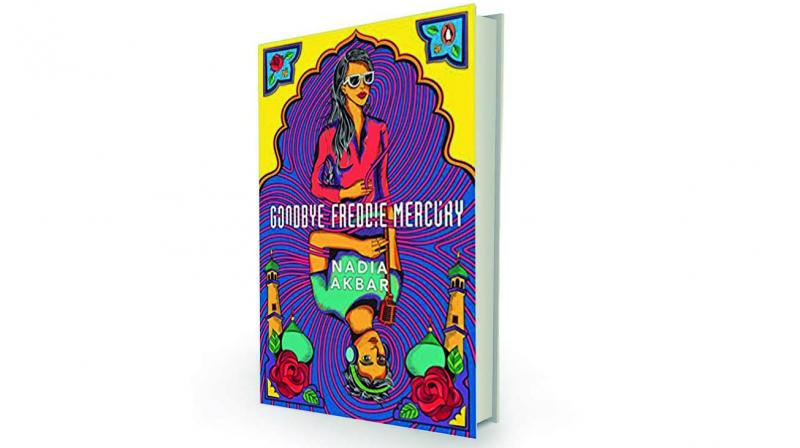 Which rock fan on the Indian subcontinent hasn’t thought of Freddie Mercury with pride? As one of the main characters, Bugsy (an RJ, much to the horror of his retired brigadier father), says:

“Before he was the great Freddie Mercury, ladies and gentlemen, he was simply Farrokh.Once a young desi bachcha playing with his aloo ka paratha,Now the paragon of all that is good and holy in this dusted desi world…Brown and buck-toothed and beautiful. And he’s ours, yaar, he’s ours…”

And which educated (and non-fundamentalist — this is crucial) person on the subcontinent hasn’t thought of honour killing with disgust? Meet Nida, the other lead character, who is revolted when she reads about the murder of an aspiring Pakistani model by her brother to protect the family’s honour (remember model Qandeel Baloch’s murder in 2016?). The headlines, “Brother Kills Famed Sister for Honour”, make her retch. “Brother Cuts Off Penis, Restores Family Honour” — that’s how I would like to see it play out. That’s the kind of headline that would really make my day. And probably do a better job of restoring honour to the family. You like Nida even more as Bugsy observes her at a party: “I watch Nida laugh, open-mouthed and head tossed back, unoffended by Omer’s crudeness. I appreciate that she doesn’t pretend to be shocked or scandalised, something most desi girls feel obligated to do when they hear anything related to sex, balls, dick or pussy. As if looking shocked magically repairs their hymens.”

It’s impossible not to instantly relate to Bugsy and Nida — even when they take you on an over-the-top sex, drugs and rock’n’roll tour of contemporary Pakistan. Oh, and booze too: “As well as being the best Christian bartender in the city, James plays a mean saxophone. He was quite the musical big shot on the seventies Pakistani club scene, way back when there were nightclubs and open bars and, apparently, (according to James) women in pink hot pants grinding to live disco. This was way before Zia and the death of public nightlife in the eighties. Forty years later and the nation’s still parched; desi prohibition trickles on, except for a few interlocked rings of partiers circling like thirsty vultures at the watering hole, pecking and devouring themselves in a bootlegged frenzy.”

Nida is a middle class college student with the shadow of her Army brother’s death hanging over her. “In my family, we shop to forget my brother Kasim. There’s no drinking, no drugs, no windswept midnight motorbike rides. At least not for my parents and my sister Fatima. The destruction is still molten within their chests.” Home is full of gloom and doom, and Nida grabs the only escape she gets — the company of dope-addled, impossibly rich, and politically influential brats in Lahore. Her recently acquired boyfriend Omer’s suave dad Iftikhar Ali is the right hand man of Pakistan’s corrupt Prime Minister. Nida doesn’t love Omer or even really like him, but hey, any escape is welcome. You may not like brash Omer either, but you certainly do enjoy him! Particularly his ridiculous pet names for Nida, who finally wearily says: “But I’m not altogether pleased with my new nickname, which for some reason has downgraded from ‘kitty cat’ to ‘meow-mix’ and, now, to ‘chicken nugget’. Am I becoming cheap processed food?”

The conversations are witty, the pace is swift, and apart from pages and pages and pages of sex, drugs and rock’n’roll (and alcohol — never forget!), other things are happening as well: random bomb blasts (no contemporary Pakistani novel can avoid mentioning them), the growing popularity of a relatively newbie politician Mian Tariq (shades of Imran Khan, perhaps?) who has a refreshing anti-corruption agenda, and vulgar mujra parties thrown by politicians who “people take seriously during the day. Men who appear on solemn talk shows and political debates, men who lead the government and decide the fate of our national economy. These are men who meet UN dignitaries and foreign diplomats, the US President, Angelina Jolie, for goodness’ sake.”

Even more pages of drug and alcohol binges follow, till the law of the universe kicks in: the higher you get, the harder you fall. You know something awful is going to happen, but when it does, you’re astonished because it seems contrived and at odds with the natural flow of the novel — this is the point where the story starts to falter. Moby, an old and long forgotten friend of Bugsy surfaces and guilt trips him into playing a role in some ridiculous political game involving Mian Tariq. If only the author had shut down her laptop, gone for a long walk, a longer shower to clear her head, and reworked this situation. Oh well.

Meanwhile, Nida’s relationship with Omer gradually loses its charm. So does she: the tough, no-nonsense feminist we first met behaves like a bit of a pushover, going along with Omer’s whims and not standing up for herself. Sad, because she was brilliant to begin with.

Goodbye Freddie Mercury is a truly enjoyable read — young, fun and marvellously irreverent. Well, at least until the last quarter when it abruptly shifts gears from effervescence to darkness. Even so, it gives you a delicious flavour of Pakistan, and if you have any misconceptions, be warned: they’re going to be shattered into tiny pieces.