What doctors want for patients of maniac depression is a placid, calm and harmonious state. 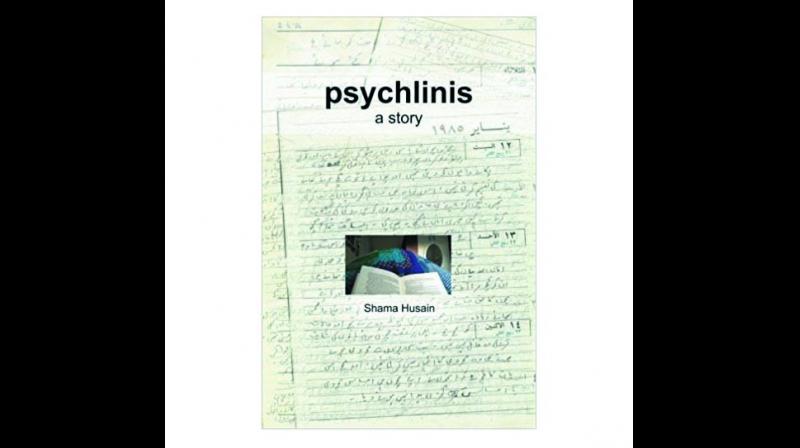 Psychlinis – a story by Shama Husain is an amazing book about the world of those who are bi-polar or suffer from maniac depression. We, in India, know very little about these mental ailments and tend to treat those with acute mood swings, anger often taking the shape of violence, as crazy people who need to be put away. This book shows you young people coming to terms with their ailments, conquering the devils that torture their minds to lead relatively normal lives — many of them great achievers with bursts of frenzied creativity. Some are brilliant teachers in their long spells of sanity and mathematical wizards with numbers.

This is not a story told by medical professionals but by people who have coped and are still coping with mental illness known as maniac depression or bipolar disorder. The main character has dealt with the mental ailment for most of her adult life, knows the various lines of treatment in India, Singapore, US and Geneva, the mental shock that are still administered almost as a last resort to calm the turbulent mind and the new range of improved drugs available. Shama’s book clearly shows that over the years a lot of the mist surrounding the ailment has been lifted.

Psychlinis, while drawing the contours of maniac depression is an extremely readable book. It is almost racy and verges on the literary. It uses English poetry and chaste Urdu to lift it from the humdrum of a medical ailment story. It captures the seasonal moods of India, the mango season and even the political tensions of Muslims, Sikhs over the years. It dwells on traditional family moorings, the importance of education in the University town of Aligarh and the understated romance of the protagonist.

It’s a story that is almost autobiographical as it tells you about young Sara Ibrahim, a dusky, slender and long-haired girl from Aligarh, who has a wonderful childhood and a warm and loving family, both parents being teachers and her mother teaching psychology. Even as a young girl, she heard voices in her head but as advised by her abba (father), she would put a pillow over her head and smother those voices. She gets her first panic attack after her father’s death, whom she loved a lot. It is only much later in the book that it is revealed that her father was also a psychotic.

Apart from wonderful siblings and a loving and caring mother, Sara’s life is enriched by a loving and caring husband, and later children who suffer through her periods of mania but develop understanding and insights to deal with it. Like diabetes, this is an ailment that can be passed on to the next generation, so when she sees the first signs of illness in one of her children she seeks early medical help and helps him cope with the demons.

A chemistry professor and a mentor who visited her while she was in hospital in the US explained to her “you have what is called a chemical imbalance in the brain, which mars the communications in and out of your brain, producing all these strange thoughts. Much like the chemical imbalance of insulin, which causes diabetes. As people who have diabetes, you just have to eat medicines that stabilise this imbalance, and all will be well.”

After one of her episodes a nurse explains to Sara that she was a rare patient who had a clear recollection of maniac episodes and could relate thoughts, emotions and feeling with focus and clarity. It is this ability that has enabled her to write this book. It is also interesting that the mental ailment may lie dormant for long spells till something triggers an episode.

What doctors want for patients of maniac depression is a placid, calm and harmonious state. A life of quiet routine! Partying is fine but loud parties are best avoided. To retain her sanity while a troubled child was in college, Sara recalls making seven appliqued razais (quilts), a graduation doll and several graduation sling bags or jholas for her children and their friends. “It became a quirky art form that kept her composed”.

Knowing the author, I asked her what was the most difficult phase of mental ailments and she said it was right at the start — the self-acceptance. “Am I ill or am I bad?” is a question every mentally-ill person asks himself/herself. The greater difficulty, she says, lies in the fact that the person is required to make an appraisal of the mind by a broken mind, by a mind that doesn’t think right. No matter what the answer, you stand to lose a little of your “self”, stand to lessen yourself a little, in your own eyes and in the eyes of others.

Having come to terms with the illness, you decide to go to a psychiatrist, she says. But who is a good psychiatrist? Is it better to go to a counsellor? Is it psychotherapy that you need or drugs? What is too much medication? Is this the effect of a medicine or its side-effect? How do you know that you are getting better? A mental illness and its treatment leaves one with many nagging questions and very few answers, she says.

This book should be read by doctors, students and people who are either dealing with bi-polar people or suffering from it. It gives great insights. However, I do think it would have been useful to list out the various forms of mania as addendum, and FAQs like: What is the difference between bi-polar and mania? Can a person have different forms of mania or does the same form of mania affect the person who has it. If not treated what happens? Is this mental health problem genetic? Can one prevent the next generation getting it? Can a person who is bi-polar lead a relatively normal life, be an achiever. Is being bi-polar an indication of high intelligence? What have been the changes in treatment over the years? Are electric shocks still given? In which country/ hospital can you get the best treatment?

And finally, how does one inform the general public that being bi-polar is not the end of the world. It can be treated and one can lead a fairly normal life.