Read it to know the pain and joy of activism

Getting the dispossessed to appreciate that access to information and knowledge is vital, was the easiest part. 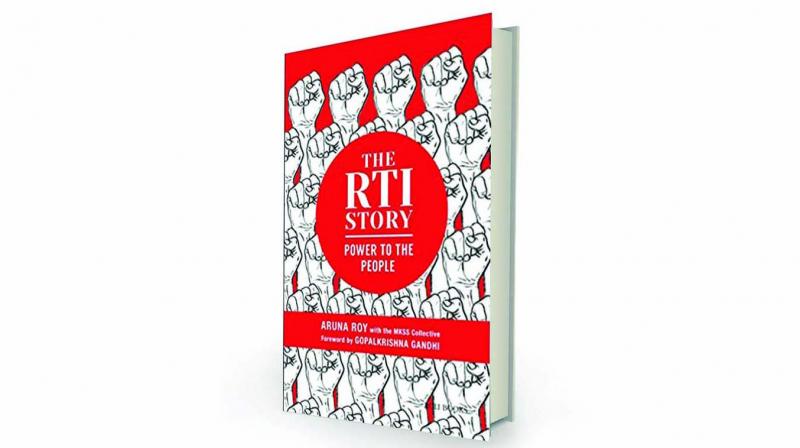 This is not a glib account of mobilising the rural poor, penned by a peripatetic babu or a drive-in-fly-out development expert. It is, refreshingly, a record of activists, who elected to spend the better part of their working lives making a difference, bottom upwards, and three decades later remain rooted in their karmbhumi — village Devdungri, Rajasthan.

Some came from well-off urban backgrounds and yet stuck it out in the harsh and relentless realities of the rural poor. This testifies to their commitment. But even to attribute high moral incentives to them, betrays the tinted glasses of this urbanised reviewer. The authors do not vent their frustration, voice their regrets or betray even a whiff of resentment against an uncaring world. What shines through instead, is their quiet joy and fulfillment, at doing something useful.

Aruna Roy, for all her careful attempts to share the credit, is the central figure. Born into a family of lawyers, she drifted into the elite Indian Administrative Service in 1968 but resigned in 1975 to work with the Social Work and Research Center (SWRC) in Ajmer. Clearly, goaded by the need to be more immediately and directly involved with real people in rural India, she left SWRC in 1983. Nikhil Dey — recently returned after college in the United States, seeking something beyond a comfortable life, became a friend; Shanker Singh, a local village official’s gifted son, adroit puppeteer and communicator extraordinaire, completed the group which bonded and decided to check out the rural empowerment landscape in Jhabhua, Madhya Pradesh. That seed did not flower. But bonds between the three deepened.

They resolved, in 1987, to put down roots in village Devdungri, which today is part of district Rajsamand in the Mewar region of Rajasthan. This was close enough to Shanker’s village, Lotiyana, to give the group an entry into rural life through his local bonds of kinship. Here, in a mud hut, rented from his cousin, the small group lived like the villagers around them and awaited a gradual immersion into the rhythm of village life and hopefully, local social acceptance — trust and credibility is central to an activist’s effectiveness. Meanwhile, the group refined the credo of their concerns. These coalesced around the need to enable the rural poor and marginalised, to look beyond their sordid reality of traditional social and cultural constraints, to understand and avail of, the constitutional rights available to them, within India’s democratic and institutional architecture. The disastrous drought, blighting the region, presented an opportunity. The standard mechanism for drought relief was to initiate civil
works. By 1983 the Supreme Court had directed that public works must comply with payment of minimum wages. But this was rarely done. The group resolved that getting workers minimum wages would be their central concern. A related opportunity arose due to the tyrannical ways of a local sarpanch who misappropriated village development schemes for personal benefits and whose benami holdings encroached on village land.

In both cases, empowering the poor meant getting access to the government records of money allocated by the government for different schemes; the amounts spent, on what and when. At that time ordinary citizens could not access these records as a right. Often mistakenly, even a list of Below Poverty Line cardholders was conveniently construed to be secret. Consequently, in any dispute with government entities — around wages or non-inclusion for welfare schemes “the villagers were always the liars”. They had no way to prove their case because the truth was hidden inside the official records, to which only the government had access.

Getting the dispossessed to appreciate that access to information and knowledge is vital, was the easiest part. The awareness that local government intermediaries were swindling them kindled anger, and sometimes outrage among villagers. While the immediate oppressor is visible and becomes vulnerable, the veiled support of those higher up in the hierarchy, maintains the status quo. Getting villagers their rights, means changing the status quo from the top.

The political vehicle used by Aruna and her activist colleagues to generate awareness; the desire for change and an ecosystem for long-term support to deliver rights to the rural poor was the Mazdoor Kisan Shakti Sangathan (MKSS). The artful, determined and collaborative way in which it was constituted, and the strategic depth of its functioning is a delight to read. The ideological roots of the MKSS lie in the life and thoughts of Gandhi ji (non-violent protests against government apathy), Babasaheb Ambedkar (equity and dignity for all) and J.P. Narayan (social and political revolution within constitutional constraints).

The movement for access to political and social rights, formally started in 1987, expanded organically over time from the village level to the state level by the mid-1990s and finally to the national level by 2005, when the Right to Information Act was passed by Parliament. Parivartan, the Delhi-based NGO, headed at the time by Arvind Kejriwal, evolved its strategy of “direct democracy” from the MKSS methodology — a mix of rootedness in organising the poor from within; high moral, ethical and personal values; imaginative use of local folklore and theatre like the Ghotala Rath to lampoon corrupt politicians; careful research to unearth government information to pinpoint negligence, fraud or corruption using the vehicle of Jan Sunwais (public hearings).

Less successfully the MKSS also branched into directly managing kirana (provisions) stores in villages as a competitive force to make local traders less rapacious and reduce their profit margins. While useful as a temporary local intervention to break a trader cartel in a small village market, this model proved difficult to scale up. The MKSS also dabbled in village-level elections to get some of its well-intentioned members, elected and collaborate with like-minded parties. But it is far from transmuting into a political party.

Aruna, 41 years of age in 1987, is 72 today, Shanker is 64 and “young” Nikhil is 55. During the last three decades of their struggle, the Right to Information has been embedded into the accountability structure of the State, bringing the much-needed transparency. But making the State accountable to the people, in real time, is a broader unfinished task — top-down accountability and bottom-up participation, both need deepening. The good news is that the indefatigable trio is upbeat about conquering this frontier too.

This book is a must read for cynics, who want their optimism restored; those eager to share the pain and the joy of activism; organisational behavior “experts” and budding activists looking for pathways to India’s development.