If you are familiar with Pattanaik’s earlier books, you will also note that this book is not quite in his usual style 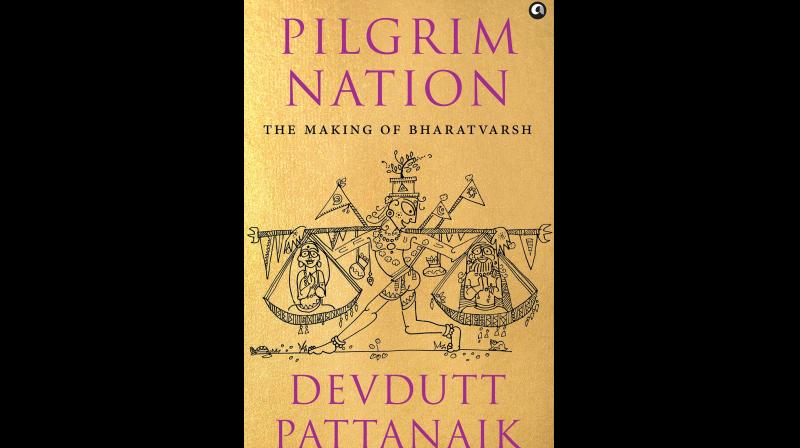 Cover page of Pilgrim Nation: The Making of Bharatvarsh.

Whatever your political affiliation, your idea of religion, your stand on history, and your attitude to learning, it’s safe to say that you will be offended — or at least made a bit unhappy — by mythologist Devdutt Pattanaik’s latest book, Pilgrim Nation: The Making of Bharatvarsh.

If you do not like the concept of secularism, you’ll be purple-faced with rage at the syncretism of various places of worship around the country.

If you do not like the idea of using the past to justify the present, you’ll be distressed by the many reiterations of how invaders looted and destroyed temples.

If you think faith must be single-minded and you must worship in one particular manner, you’ll be incensed by the myriad ways in which human beings make their own mythologies to suit their own needs.

If you don’t take kindly to lessons on being a good person, you’ll probably throw the book at the wall and then tear out the pages and use them to mop up noxious excretions.

But if you can manage to put your beliefs aside for a short while, you might find yourself a teensy bit charmed by a book that takes you through 32 places of pilgrimage in the country, across all major religions, complete with stories of how and why these places came to summon worshippers and the kind of worshippers who answer the call.

Pattanaik’s premise in this book is that from times way back when borders were fluid and India did not exist as a national entity, the sub-continent was still perceived as a single unit because it was tied together by the threads of all kinds of pilgrim routes. Women and men left their homes and travelled long distances to seek locations of piety that would lead to a darshan of God in one form or another, and thus purification from sins and a renewed joy in life.

As centuries passed, the idea that God has more than one form led the people of the subcontinent to accept as their own the gods of other faiths as well. And now in these modern times, while some attitudes to God seem to have become more single-minded, some gods are not associated with any particular faith: they may well be film stars as the last chapter of the book shows.

With this premise as his base, Pattanaik divides his book into ideas of devotion rooted in periods like the Vedic age, the Tantrik Age, the European Age and so on, covering the Hindu, Buddhist, Jain, Muslim, Christian and Sikh faiths, as well as local and tribal iterations of the various stories and mythologies. Anyone who has read his earlier books will recognise the way he deals with each anecdote gently and thoughtfully, asking questions and providing different points of view on the same stories, ultimately expanding his theme to cover all sorts of worship and devotion.

However, if you are familiar with Pattanaik’s earlier books, you will also note that this book is not quite in his usual style. For one, his tone of voice does not carry quite the same sense of understanding when he talks of imambaras, mosques, gurdwaras and churches as it does when he talks of shrines and temples – he usually writes on Hindu mythology. For another, Pattanaik never imparted obvious lessons in his earlier books; he merely presented several viewpoints that let readers see possibilities. In Pilgrim Nation, however, you get in-your-face lectures on how to be a good human being. This detracts so greatly from the charm of the book that I cannot re-read it ever.

Pilgrim Nation: The Making of Bharatvarsh