Murder mystery set in the 1,600-year-old kingdom of an able but forgotten queen

The Curse of Anuganga is a historical fiction that transports readers to 403 CE and that too without a time-machine. 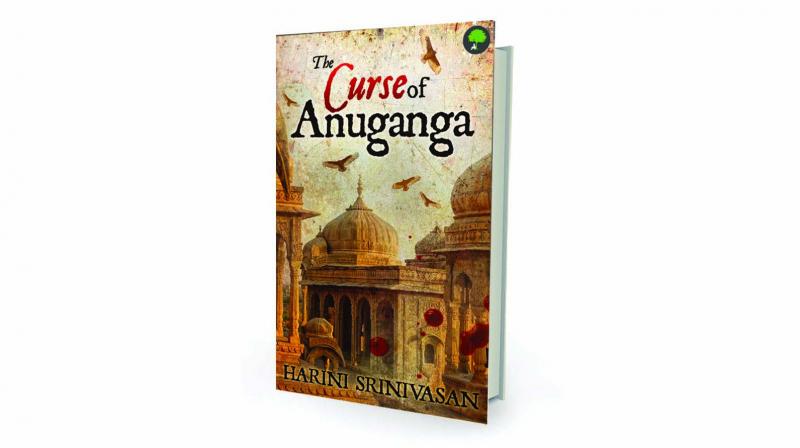 The Curse of Anuganga by Harini Srinivasan TreeShade Books Rs 399.

I started reading The Curse of Anuganga by Harini Srinivasan with a lot of enthusiasm because I was excited about the murder mystery part. Thrillers always have that effect on me. But the extremely slow pace of the book in the initial 40-50 pages had my attention drifting quite a bit. Those pages were tedious and taxing, but once I braved those pages, I was in for a treat, albeit a slow one.

The Curse of Anuganga is a historical fiction that transports readers to 403 CE and that too without a time-machine. The book is set in Nandivardhana which is ruled by Rani Prabhavatigupta, the widow of Maharaja Rudrasena II. Rani Prabhavatigupta’s father Chandragupta II, the ruler of Pataliputra, is her advisor, as her sons: Divakara and Damodara aren't old enough to be kings.

With that information, I have just provided you the time frame and the backdrop. I am yet to introduce you to the main character/s. Arya (meaning sir) Vishnuveera is Nandivardhana’s most reputed goldsmith. He is summoned by the queen to craft the jewels for the royal wedding of her son crown prince Divakara. At the same time Vishnuveera is also approached by Vinayashura who lives in the opulent corner house in the Buddhist quarter of the city, to craft jewels for his daughter’s wedding. Vinayashura is a rich trader, who is supposed to have connections to the royal family.

Now with two weddings to cater to, Vishnuveera is in a bit of a fix. Vishnuveera sends his two sons, his biological son Shaunaka and his adopted son Ashwini, with a couple of his best goldbeaters to Vinayashura’s house, while he himself answers the queen’s summons. The two names: Vishnuveera and Vinayashura confused me quite a bit in the beginning.

Though Shaunaka has no interest whatsoever in his father’s business, yet to keep his father's word, he and the other goldbeaters arrive at Vinayashura’s house the next morning, at the stipulated time, to start making the jewels. Within a short time after their arrival, they hear a bone-chilling scream from the house. Shaunaka and Ashwini set out to inspect the cause of the blood curdling cry. They find Vinayashura’s dead body, his throat has been slit.

The observant Shaunaka and Ashwini are recruited by the mahadandanayaka (chief judicial officer) and dandaposika (head of police) to assist in solving the murder by acting as secret spies, because they were present at the scene of the crime. At the same time Mahakavi Kalidasa under the pretense of attending the royal wedding has joined forces with the local police to unearth the mystery of the crown prince’s poisoning (he is being administered different poisons every day). As Shaunaka and Ashwini start their sleuthing, they find that the two cases are connected. Slowly Shaunaka tries to find the missing pieces by visiting the corner house and talking to Devi Tanirika, the dead Vinayashura’s wife.

It was Shaunaka’s character that kept me glued to the pages. From a reluctant goldbeater in the initial pages, with no self-confidence, he really comes into his own as the police secret agent, trying his best to help keep his city safe from miscreants who want to kill the crown prince and also to find the murderer or murderers. He turns out to be a worthy recruit, using his keen sense of perception, his observation skills and his quiet nature that allows him to blend into the background, to pick up vital clues, to find the missing links and connect the dots.

The language, the characters, their names, the setting, the clothes, the dialogues, everything has been meticulously researched. There is not a single jarring element that stands out. In fact after some time the book becomes quite suspenseful. For history buffs the book will be a treat they wouldn't want to miss. I really felt bad that Kalidasa was relegated to a minor character, his scenes had no impact whatsoever. Perhaps that was Srinivasan’s vision to lay emphasis on Shaunaka and his brother Ashwini’s characters. Another character who really appealed to me was that of pitamahi (Shaunaka’s paternal grandmother), a lady far ahead of her times and quite the spirited one at that. Wish she had a more powerful role.

What is commendable is the way Srinivasan ties up all the loose ends and brings the book to a surprise ending. Like a master blender she whips up quite a delicious history treat. Go ahead and savour the delicacy!

Rachna Chhabria is a Bengaluru based children's author and a freelance writer. Her latest book is Festival Stories Through The Year (HarperCollins).