Some of the others I have read and come across in various journals and magazines, such as the Granta, Berlin Quarterly and Open. 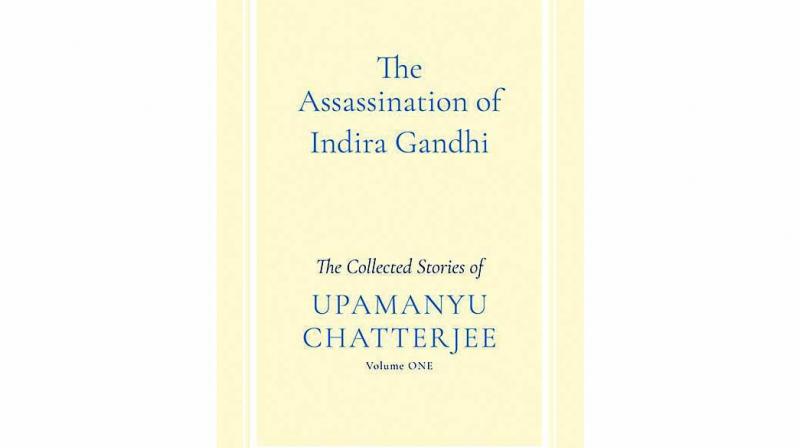 Through the windshield they watched the wide silent road, so well-lit and dead. New Delhi, one in the morning, a stray dog flashes across the road, sensing prey. ‘So when shall we meet again?’ asked Dhrubo for the eighth time in one hour. Not that parting was too agonising and he couldn't bear to leave the car, but that marijuana caused acute lethargy.” Who can forget this wonderfully evocative opening description of a Delhi night in Upamanyu Chatterjee’s debut novel, English August: An Indian Story (1988) that was later made into a feature film featuring Rahul Roy as the book's protagonist, Agastya Sen. Both the novel and film are cult classics now.

Upamanyu Chatterjee follows up his recent novella, The Revenge of the Non-Vegetarian (Speaking Tiger) with Volume One of his omnibus of collected short stories, The Assassination of Indira Gandhi (Speaking Tiger). This volume contains a dozen stories including the title story that I remember reading in 1985 in the London Magazine. Some of the others I have read and come across in various journals and magazines, such as the Granta, Berlin Quarterly and Open.

I have quoted from his debut novel because, stylistically, we can see Chatterjee's early beginnings — the zip and spunk in his language and phrase making, the couched literary allusions, and his razor-sharp dark humour and irony. All these have gone on to become the hallmark of Upamanyu Chatterjee’s fictional signature, one the reader is able to see and experience in the newly released short story compendium, spanning the mid-1980s to the present day.

The opening story in this book, ‘History Lesson’, also his most recent story (written in 2018), “follows Thomas Roe, the much feted English Ambassador to the court of Jahangir, as he bumbles through a subcontinent far larger than his imagination can accommodate”. It is a longish story of fifty pages that amply displays Chatterjee's personal style. Take for instance the very first line — which in fact is also a paragraph — one that contains a mere seven words: “Notes for a skit in ten episodes.” The rest of the story is structured in long paragraphs with dialogues punctuating them. It is the writer's way of setting tonal contrasts, calibrating different registers, to convey a wide variety of themes and concerns.

The last story is also the title story, one “in which a young Sikh sequestered in his parents’ home in Mussoorie, and debilitated by jaundice and ennui, listens disinterestedly to the news of Indira Gandhi's assassination and the massacre of Sikhs in Delhi.” This sense of the young man’s “disinterest” and boredom is reminiscent of Agastya — the lead character of English August. It remains an important and urgent story in our present times, even thirty-five years later after it was first penned.

Loneliness, cynicism, mistrust, and a world of fragmented hateful politics — nothing seems to have changed in three-and-a-half decades. Are we ever going to learn? Or are we happy to let the world slide into decay, extinction and anthropocene? Savour for yourselves the ending of the story, ‘Sparrows’: "Once our men of science killed them to unlock nature's other secrets. Now they die in front of us and we don't see what their deaths are saying about what is killing them. Futile, thinks he, are the nature’s warnings to the heedless, these providential ways in which sparrows choose to fall."

After the publication of seven highly successful books, The Assassination of Indira Gandhi by Upamanyu Chatterjee is an essential volume from a writer who is at the height of his powers.

Susmita Bhattacharya’s new book, Table Manners (UK: Dahlia), a collection of eighteen short stories, recently won the ‘Saboteur Award for the Best Short Story Collection’. She has earlier published a novel, The Normal State of Mind (Parthian), which was long-listed for the ‘Words to Screen Prize’ by the Mumbai Association of Moving Images (MAMI). Her new collection spans vast geographical latitudes from Mumbai to Venice, Cardiff to Singapore — a book that is a close observation of the humanscape and urban landscape.

Her writing style is lucid, her sentences relatively short and crisp, and story telling, brisk. Here is the opening of her eponymous story, ‘Table Manners’: “The Chinese family from across the street is cooking. The whole street knows. Into this cold grey evening they infuse the smell of garlic and lemongrass. The steam from their bubbling pots condenses on their window, creating a soft blur of their movements. // Their bin flew open one blustery day, spewing out oriental delights into our bleak world. Crumpled tea-green packets, golden peanut biscuit wrappings and red rice noodle cartons. Ribbons with calligraphic writing fluttered in the trees for days.”

Bhattacharya’s strongest skill is the way she evokes the everyday detail in nuanced manner. Whether it is “a parrot [taking] on the voice of a dead husband”, or “two women in search of god and marriage”, or “a man in exile writes home” — her stories ultimately have a deep human connect and are full of compassion.

Ayaz Rasool Nazki is a poet who writes in Urdu and Kashmiri (and more recently, English). His new novel, Satisar: The Valley of Demons (Vitasta), is set in Kashmir — a satire cloaked in fiction, written in a lucid and urgent style. In Ranjit Hoskote’s words, it “combines the tonality of science fiction with the excitement of a roman a clef, the urgency of political allegory with the pace of a thriller.” Here is a short taster from the ‘Prologue’ of the book: “The troops raided the house of a high profile media man, Ahmad Jalil, in Srinagar. They had been ordered by the major to teach him a lesson, so they handcuffed him, dumped him in a military vehicle and drove away, His house was ransacked and special treatment was meted out to his study — they burnt some of his books and tore others, and manuscripts of great value were thrown out of the windows. Some fell into the flowing waters of Jhelum, and others got scattered all over the place. Later on, ragpickers collected sheaves of these papers from a nearby park. I followed them to Bahademb junk market where they dumped their collection on a heap of books and manuscripts stolen from the migrant Kashmiri pandit’s homes and purchased the heap for posterity and put it to print.”

Zeena Choudhury’s Church Bells and Darjeeling Tea (Dhaka: University Press Limited) by contrast is a dreamlike memoiristic book that “tells a story of a different era, of different lives. It is a story of a ten year long stay in a land filled with shivering mist and dense clouds… the land of Orange Pekoe Lopchu Tea, Toy Train, and Kanchenjunga —  Darjeeling!” In this little book, there are thirty-three little tales, each spanning just a few pages in length, and some even less than a page, that originally appeared in the pages of the Bangladeshi newspaper, The Daily Star. The drawings and illustrations that dot the pages of this book, lend a lovely evanescent quality to these gentle tiny tales.

Mridula Garg's author biography tells us that she is “equally proficient in Hindi and English”, that she has written novels, short stories, plays, essays, memoir, and travel writing. She is the author of several books, among others:  Chittacobra, Anitya, Kathgulab, and Main Aur Main. Her newest book, The Last Email (Speaking Tiger), is a modern epistolary novel — not an exchange of traditional handwritten letters as one would have found in Samuel Richardson’s Pamela or Virtue Rewarded (1740) — but this one uses the modern medium of emails. As in the traditional epistolary novel — told through the medium of letters written by one or more characters — one of the earliest form of novels and remained popular until the nineteenth century; The Last Email too employs a similar form in an updated manner.

The Last Email is full of nostalgia and memory, of yearning and desire, of the private need to record history. It is done through the storytelling of the two characters — Kevin, a vicar devoted to the political struggle for Scottish independence; and Maya, a reputed author of Hindi literary works. Maya may have a resemblance to the author’s own persona, but it is a veiled one — one that uses fiction to covey a story of the two character's individual realities. “Ultimately Kevin and Maya must realise, each on their own, whether the strength of their remembered passion can match the four decades of quotidian life they have both accrued.”

Here is the actual “last email”: “My dear dear Maya, / What can I say … but this … / Three Wise Women / Would have asked directions / Arrived on time / Helped deliver the baby / Brought practical gifts / Cleaned the stable / Made a casserole / And there would be / Peace on earth. / In other words / They would not have dithered! / Forever, / K.” Mridula Garg’s strongest forte, as one would expect in a novel employing this form, is the deployment of the first person narrative and the use of believable everyday
dialogue.