Books   21 May 2017  Book review: Where death plays like a broken record
Books

Book review: Where death plays like a broken record

The problem with writing similar books so quickly together is that the Dickensian pathos Salim is trying to achieve is lost. 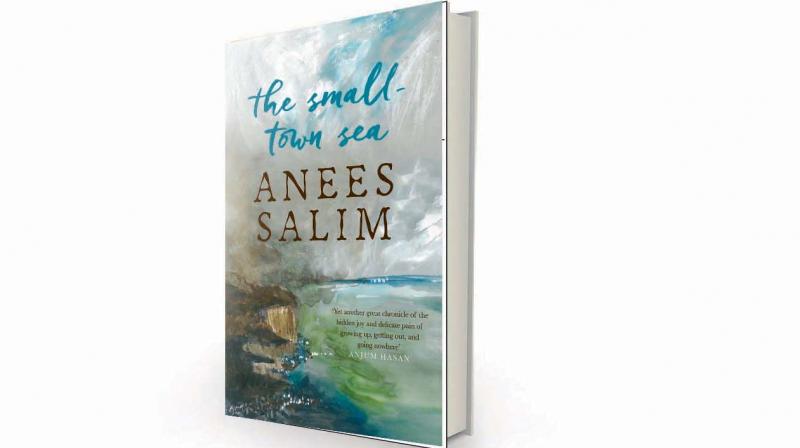 Anees Salim’s new novel The Small-Town Sea is the story of an unnamed boy in an unnamed town who grapples with the consequences of his unnamed father’s death.

The novel begins ominously enough. On the first page itself the 13-year-old narrator loses his father, referred to only as Vappa. The rest of the first half is narrated as a flashback where the cancer-stricken Vappa, nostalgic in the face of imminent death, decides to leave the unnamed city where he resides with his family and return to the unnamed town where he grew up.

Vappa longs to get a front-page obituary that transcends the boundaries of his small town and artistic insecurities. You see, he is an almost famous author who has won an unnamed, but almost famous, award for which he is convinced he must be acknowledged in life as in death. Hedonism of the writer? Understandable. Halfway through the book he finally gets the obituary he wants only to have it turned into a paper cone for peanuts later that day. Such is our ephemeral life.

As his father dies, too slowly if you ask me, death shape-shifts into many forms, taking away other names, places, animals, things, which are meant to be dear to the narrator. Most of these are unfortunately treated dismissively by the author; a foreshadowing of the fact that they are to go? So they die — over and over again, chapter after chapter — the cook from a boat, the chickens on Eid, the bird eggs, grandfather Uppuppa, cousin Junaid, the pet pigeon, the best friend’s supposed mother. To give the illusion of plenty the author assigns different forms of death — hunger, drowning, hanging, neglect, old age and disease. Death is meant to be an ode to the past, present and future of the book. But death as a jolting device, to carry forward the plot, is so banal, that by the time one reaches the end of the book — where important and unimportant deaths are still taking place — one finds oneself unshaken and unmoved. Why would it be otherwise when death is announced like a menu list by an uninterested waiter at a busy Udipi restaurant? It leaves no moment to be immersed in grief or pause.

If the loneliness of the protagonist, defined not as a feeling but as a series of unfortunate events — like abandonment by his mother, the loss of his near ones — isn’t convincing enough, the author deploys death till the last few pages to convince you that the boy is truly alone.  Sadly, not much in the novel grips as much as the genius of Salim’s impressive and infallible writing. There is no development except death. The characters are in ennui much like the book itself. One fails to identify with their never-ending sorrow. One fails to see the humour in giving a coconut tree climber the caricaturish name of Tarzan. The neglected treatment of the characters is disconcerting. They required just a little nudge, a little more investment. For example, the orphaned friend Bilal could’ve evoked pathos. He didn’t. The grandmother, Vappumma, saddled with a dependent grandson, could’ve evoked sadness. She didn’t. The only exception was the protagonist’s mother, Umma, whose guilt at abandoning her son is skillfully etched out in doleful moments and silences.

The lack of nomenclature further alienates the reader. So does dividing the book into book one: introduction, rising action and climax, and book two: falling action, resolution and end, which does not achieve the jest the author had probably planned. The episodic plot also holds together rather tenuously. Planting motifs, like the Russian cartoon show of Yuri or Yeriel, could’ve served as placeholders to some emotion or arc or plot device, but filled the pages with mere text. There should’ve been more evocative scenes like when Tarzan breaks the eggs of a bird in front of the child narrator, or when Vappa tells his son that he must “walk alone”.

I always enjoy a dark read because I feel it shines the light on the corners of our life that we prefer to keep hidden. But this book is so dark that the small ray of light that sustains it comes towards the end, when the protagonist, orphaned by death and abandonment, much like his best friend Bilal, becomes a son to childless parents. I must admit that I loved Salim’s last novel, The Blind Lady’s Descendants. I would earmark it among India’s finest books written by a writer who easily ranks among our best. After reading such a masterpiece, one expects great things of a truly gifted writer.

The problem with the book is that it reads as a stepsister to The Blind Lady’s Descendants. Present are the same motifs: a young male protagonist, the small town, the sea that takes lives, death, parents as perpetrators, parents as victims, parents who leave, the lonely misunderstood narrator, the book as a bildungsroman. Even the narration of the protagonist, whether it’s a suicide letter like in Hamsa’s case or a letter to literary agent Mr Unwin, mirrors the same setting. The problem with writing similar books so quickly together is that the Dickensian pathos Salim is trying to achieve is lost. A reader cannot be expected to relish the same kind of book differently titled. The emperor needs to go shopping.

Meghna Pant is the author of The Trouble With Women, Happy Birthday and One And A Half Wife