When Taslima met the characters she wrote in Lajja

On Day 3, the conversations turned to quieter, thoughtful themes. 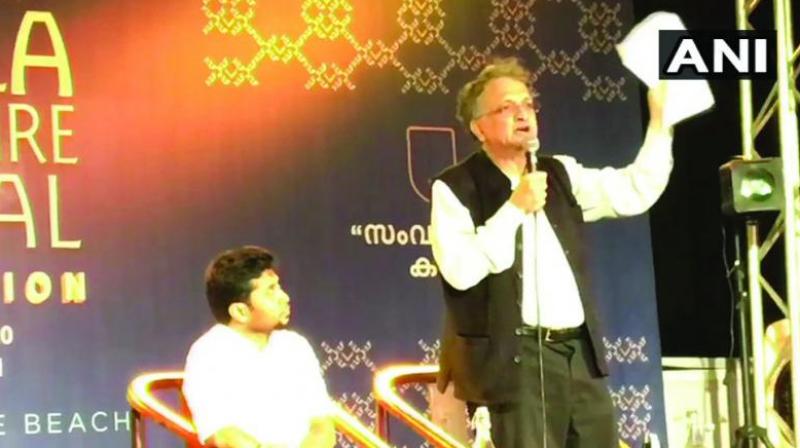 Ramachandra Guha at KLF on Friday

A literature festival on the beach: if it sounds like a balmy, charming setting, it is. With the waves crashing in the background, the Kerala Literature festival (Jan 16-19) got underway in Kozhikode this weekend, teeming with locals and those in the city for the annual event. Spread over five roomy tents set up along the shore, a range of panel discussions unfolded in English and Mayalayam from 10 am to 8 pm, organised by DC Kizhakemuri Foundation. “Are Literary Festivals Overrated?” seemed like an appropriately tongue-in-cheek conversation to have on Day 1, led by festival director K. Satchidanandan. Going by the number of people who turned up to listen to authors such Devdutt Pattanaik (on “Yoga and How to Become Rich” and “Gender and Sexuality”), Taslima Nasreen (on “In Exile: A Writer’s Journey”) and Ramchandra Guha (on “Patriotism Vs Jingoism”), it’s easy to see the growing popularity of literary festivals, especially in smaller cities.

Many of the young attendees, book in hand, and older delegates, toddler in arms, were particularly moved by Nasreen’s talk on subjects close to her heart: religious fundamentalism, women’s rights and freedom of expression. “There has to be a separation of state and religion and a separation of religion and education,” she said referring to the current political climate, though she refused to respond to questions about the controversial Citizen Amendment Act, which she said she wasn’t qualified to speak about. This year, the author has two books coming out: a memoir on her childhood, and the sequel to Shame, titled Shameless. “It’s about how I as a writer meet my creation in Kolkata when the family that escaped Bangladesh at the end of Shame land up at my doorstep and what happens then. It is a feminist book,” she revealed in an interview after her session.

With a special focus on environment and climate change, several conversations at KLF 2020 were dedicated to deconstructing the global climate crisis and possible solutions. “One of the reasons we fail to talk convincingly about climate change is that we present it as something ‘out there’. We need to make it clear it’s linked to our daily decisions — such as walking or driving — and not talk about it in terms of abstractions,” said climate change policy expert Navroz K. Dubash at a discussion on “Saving The Earth: Science and Rationality in a Time of Madness”, moderated by Pranay Lal, who works in public health and environment. The idea that we need to emit to progress is getting weaker, Dubash pointed out, while environment writer Prerna Bindra warned against the ongoing “greenwash” and recommended we rethink how we implement renewable energy. “Planting trees does not make up for cutting down trees elsewhere. You can’t compensate for forests which have taken years to evolve, with its own rich, biodiverse web of life. We need to question the logic of installing windmills by destroying sensitive habitats, in places such as the Western Ghats,” she said.

At the well-stocked bookstall at the venue, copies of the global bestseller, Ikigai: The Japanese Secret To A Long and Happy Life stood tall among other books. As the sunny afternoon melted into the evening and the crowd swelled, Ikigai’s co author Francesc Miralles from Spain took the stage in conversation with C. Balagopal, talking about the process of finding your ikigai (roughly translated to “reason for being”). But what if one doesn’t want to deconstruct life into binaries, such as being happy or sad, one audience member wanted to know. “If you are happy, don’t question why you are happy. It’s important to find your ikigai only if you feel lost or empty,” stressed Miralles. A person who lives a long life is likely to have many ikigais, and it’s okay to change one’s purpose and passion when you feel the need to move on, he added. “For me, in my 20s, my ikigai was to teach German, then to travel, be a publisher, and now it is to help people find their purpose,” he said.

As the sun set on day 2, historian and author Ramachandra Guha’s impassioned speech on “Patriotism vs Jingoism” drowned out any other chatter on the beach. “The Gandhian model of patriotism works at multiple levels; it starts from your home, street, city, state and then the country. It is not about standing up for the national anthem,” he said, adding that while patriotism is suffused by love and understanding, jingoism is driven by hatred and revenge. He spoke about the reasons behind the rise of Hindutva, reserving, quite unexpectedly, scathing comments for the Gandhi family, telling the crowd: “...one of the disastrous things you (Kerala) did was to elect Rahul Gandhi to the parliament,” comparing him to Prime Minister Narendra Modi, who, he said, was self-made, which gave him a solid advantage.

On Day 3, the conversations turned to quieter, thoughtful themes. In a discussion about “English: Indian’s National Language?” moderator R. Sivapriya wondered if English is indeed an Indian language as it stands today. Author Manu Pillai said, “It is now. Its roots may lie outside but it has been influenced by Indian thought, Indian experience, Indian figures which makes it Indian.” Malayalam author K.R. Meera felt that while it’s important for her to write in Malayalam, which has the vocabulary to express her experience rooted in the state, regional languages actually enrich the English language. Publisher-author Urvashi Butalia summed up how English in India has come a full circle: “It is a language that was used by the British to marginalise Indians, and now we have twisted and shaped it into a kind of weapon. It places us in an international context where we can be heard.”