An ode to Bharatnatyam, in prose

Watching Shekhar portray the protagonist, Arjun, Vatsala gets mesmerised by his performance. 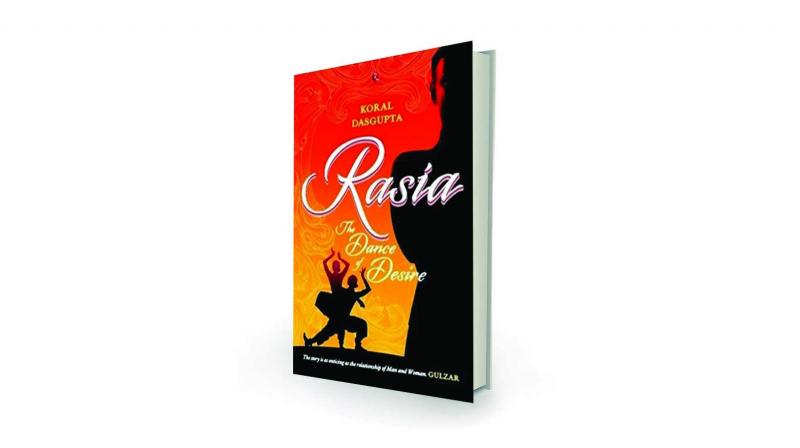 Rasia: The dance of desire by Koral Dasgupta Rupa Rs 295

The moment you see the cover of Rasia: The Dance of Desire by Koral Dasgupta, you know that you have undertaken a journey of dance. Dance aficionado or not, you end up wanting to know more about Bharatanatyam. And that’s what happened to me. Though I have heard about the dance form, I have never had a chance to watch a live  performance. But after reading Rasia, I have a new wish in my bucket-list: to watch a Bharatanatyam performance.

Rasia tells the story of Bharatanatyam dancers — Raj Shekhar Subramanian and his wife, Manasi — who run a dance academy, Kala Mandir, in Mumbai. Shekhar, the dance maestro known for his prowess, is a taciturn man, an orphan with no clue about his parents. Dance is his passion and he has a burning desire to take his dance academy to greater heights. Manasi, on the other hand, is docile. She gives in to her husband’s control-freak nature by foregoing all her desires and making his wishes her own.

The story begins with Shekhar’s visit to Kolkata. Shekhar is in the city for the last round of his interview with Britannia Industries when he happens to go to one of the Durga Puja pandals wherein he sees a girl in her early 20s dancing to the beats of the dhal (a special drum used during Durga Puja). The girl is Manasi, daughter of Nobarun Bhattacharya, the priest of the puja. Shekhar follows them to their home and puts forward his marriage proposal, which is accepted. In Manasi, Shekhar sees his future student, his first one, as well as a life partner whom he can mould to
perfection.

Shekhar trains Manasi in Bharatanatyam and, in due course, they set up Kala Mandir — India’s finest dance academy where the couple train a group of talented students who also treat Bharatanatyam as religion and their daily practice, a prayer.

Then one day, between the two enters Manhattan-based ballet dancer Vatsala Pandit who sees Shekhar perform at a dance show, Manipur Stotram, in New York.

Watching Shekhar portray the protagonist, Arjun, Vatsala gets mesmerised by his performance. Not only does she want to learn Bharatanatyam from him, she wants to share the stage with him.

She sends him a letter asking him to consider her if one of his dancers falls ill before a show and telling him that she wants to learn dance from him. Shekhar sends a curt one-line reply that if ever Kala Mandir comes to the US, she will be his first student.

Vatsala, obsessed with Shekhar, succeeds through her petitions to the department of cultural affairs in New

York who make Shekhar an offer he can’t refuse — they want him to set up Kala Mandir in the US in collaboration with them and have an inaugural show.

When an elated Shekhar lands in New York, Vatsala is one of the volunteers who receives him and as promised, Shekhar starts Vatsala’s dance lessons. Meanwhile in India, Manasi is busy conceptualising and choreographing the inaugural show, a responsibility her husband has entrusted her with. In Manhattan, Vatsala tries all her womanly wiles on Shekhar but to no avail.

When the members of Kala Mandir finally land in New York several months later with their show, Rasia: The Dance of Desire, Shiva’s cosmic dance with Kali where Shekhar is Shiva to Manasi’s Kali, Vatsala challenges Manasi to accommodate her in the show and create a part for her to prove that she isn’t insecure about her “relationship” with Shekhar. Rising to the challenge, Manasi gives Vatsala the role of Gauri.

Dasgupta has etched the characters of Shekhar and Manasi well. I found Shekhar’s character a bit dry while I immediately warmed to Manasi’s character. It was the character of Vatsala that I found irritating.

Dasgupta is in her element in the chapters where Manasi is conceptualising the play, Rasia. She weaves mythological bits seamlessly into the narrative, making the readers want more.

I wish more emphasis had been laid on these bits because Kali and Shiva are fascinating and all the stories associated with them make for an interesting read.

Of the five narratives, I liked the ones by Manasi and her father the most. Shekhar’s cold and indifferent nature was a turnoff.

Though the book makes for an interesting read, the cover is a let-down, neither capturing the essence of the story nor the title.