The Impeccable Integrity of Ruby R. is not a political novel. It’s a novel set in politics, but it’s about Ruby and no one else. 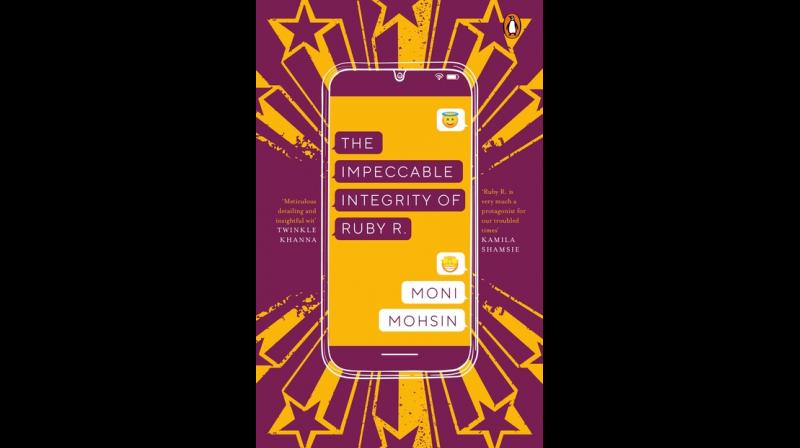 Cover page of The Impeccable Integrity of Ruby R

It was at about page 243 of this 264-page book that I actually fell off my chair, I was laughing so hard. Laughing not at poor Ruby, the protagonist of Moni Mohsin’s novel The Impeccable Integrity of Ruby R., whose whole concept of her own existence had just been upended, but at myself.

Because I had read this book so earnestly right from the start, mentally noting a Modi here, a Trump there, possibly even a Putin lurking in a sentence or two. I had muttered darkly to myself throughout about messiah-type politicians, the trolls who worship them and the apparently global inability to think. I had begged Ruby again and again to use her head and open her eyes and see what was happening in front of her. But it was only when I got to page 243 that I understood that I had been reading this book all wrong.

I could easily tell you what happened on page 243 to bring me to this revelation; it certainly would not be a spoiler because there are zero points of surprise in this book. Ruby Rauf, a hardworking and ambitious young woman, is focused on her studies with the aim of working for a bank and returning to the upper middleclass lifestyle she and her mother had lost when her banker father died, when she listens to a brand new politician speak and falls for his sincerity.

The brand new politician, Saif, a former film star, says what every politician says, but with such charm and conviction that Ruby genuinely believes he will change the country. So when her mother, who works as a visiting tutor, is humiliated by a drug baron with such strong political connections that he is untouchable, Ruby abandons her education and ambition and joins Integrity, Saif’s political party, as its social media head.

At no point in the book is Mohsin subtle about Ruby’s inevitable fall from her great height at Integrity. Nothing is hidden from the reader or even Ruby herself: Saif’s sliminess and sexually predatory behaviour, Integrity’s complete lack of honour, Ruby’s increasing belief that the end so justifies the means that even her closest friend can become social media prey – everything is made as clear as crystal. In fact, the author’s total openness in the telling of this story almost makes it dull: you know right at the start that Ruby’s life will be a train wreck and sure enough, it is.

But then page 243 arrives. And you understand the importance of the book. The Impeccable Integrity of Ruby R. is not a political novel. It’s a novel set in politics, but it’s about Ruby and no one else. It is, in fact, a coming of age novel about a young woman, her insecurities and dreams and what her first decisions as an adult make of her. It is also about its readers, like me: how we lose ourselves in the ephemera of politics; how we must come of age ourselves. In one word, it’s brilliant.

Review: The Impeccable Integrity of Ruby R. by Moni Mohsin