Book Review | A spice’s violent trajectory begs us, do not ‘other’ nature, old societies

What happens when you get to the last page of a book feeling a bit confused and intrigued? 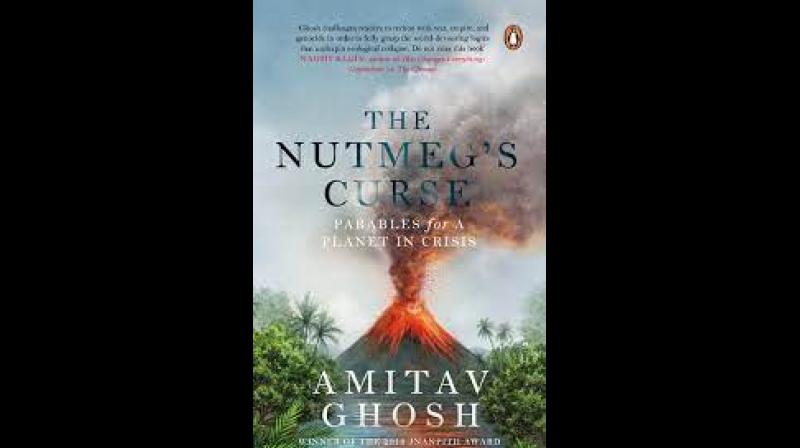 Cover page of 'The Nutmeg’s Curse '. (By Arrangement)

What happens when you get to the last page of a book feeling a bit confused and intrigued?

Maybe you think back to the beginning when you were well and truly horrified?

I started Amitav Ghosh’s The Nutmeg’s Curse with some preconceived notions which were debunked on page 1 itself. This is not as I thought an episodic journey of a tropical plant and the colonial influence on its spread across the planet. Shame on me for being so pat and obvious in my assumptions.

Instead, we embark on another sort of expedition. One that looks not just at some horrific colonial violence but also at how the very narrative of environmental conservation is born in the bowels of White supremacy, or extreme racism and the systematic use of “science” to kill, drown, murder, stamp out every voice that is not that of a White supremacist racist.

To Indians so used to British colonialism and its own horrors, what the Dutch East India Company or VOC inflicted on the island of Banda is at the worst spectrum of European brutality and extremism. This is not just a “fear” of the “dark native”. It is a concerted effort to destroy, humiliate and brutalise a people for its own sake as well as to control their land, wealth and agency. The nutmeg tree in this instance, which was nurtured by the people of Banda and used as a trading commodity for centuries.

Ghosh continues to surprise with his parables. He debates “settler colonialism”, he looks at the damage done to the planet and its peoples by European settlers and the European sense of racist supremacy and also at the close connections between racism and the emergence of the rationalist, scientific mind. This corelation is educative and disheartening. So much of what we might consider important and necessary in today’s world, is born in the worst of human thinking and discriminative tendencies.

The other mistake made by this reviewer is to presume that Ghosh premises his subject on other worlds on the climate and the planetary crisis and the wisdom of non-European people. But The Nutmeg’s Curse is not drawn from the same well as Alan Weisman’s The World Without Us. Or Peter Wohlleben’s Hidden Life of Trees. Or Jared Diamond’s seminal Guns, Germs and Steel or even his The World Until Yesterday, where Diamond looks at what we can learn from traditional societies.

Ghosh rather explores how the voice of traditional societies, indigenous peoples, the voices of other living beings, have been consistently and viciously silenced and replaced by the corporate-political-industrial conglomerate which has brought the planet to its knees.

In a sense, it is disconcerting to find shamans and those who speak to or are spoken to by “animal spirits” given currency. Until you get past that shock and acknowledge that wisdom cannot lie solely with the European scientist, especially when science has been misused to bring us to this crisis. Ghosh’s metaphors emphasise his parables. And his message that we have to listen to the world around us if we are going to save it and ourselves.

This last message is disconcerting because it seems counterintuitive. It requires one to open one’s mind and remove the biases implanted by Eurocentric/White supremacist thinking and at the same time not give in to mumbo-jumbo. To listen, if you will, to the voice of the planet, to internalise the evidence of the destruction around us.

Ghosh’s plea is for us to find once again the ability to learn from other species and to rid ourselves of the notion that humankind has all the answers and is some godsent dominant force. The message is not easy and it requires serious recalibration of established thinking. And then, how to interpret that plea in practical terms, and the hope that it carries, remains a major challenge.

The question at the end of the book is: do we understand or does the curse destroy us sooner than we think?

The Nutmeg’s Curse: Parables for a Planet in Crisis