Book Review | Feline mystique! How one cat can change your world

It’s a collection of essays and fictions by cat lovers 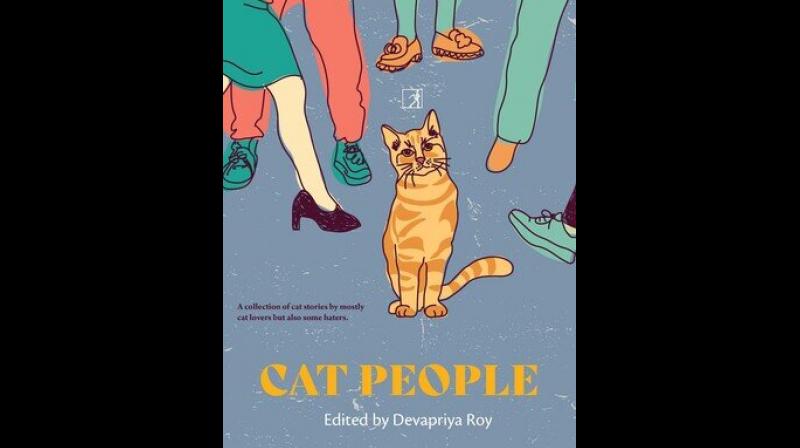 An honest confession, I have never been a cat lover, I find cats very annoying. Keeping aside my dislike, I started reading Cat People, edited by the talented Devapriya Roy. It’s a collection of essays and fictions by cat lovers, there are people who fell head over heels in love with cats, then there are those who became reluctant cat parents, when these furry creatures barged into houses and staked their claims over the physical space, as well as a portion of the human’s heart.

In the book you will meet, clingy, snooty, disdainful, regal, playful cats called Smoky, Vincent, Rahat, Billo, Billo 2.0, Mara, Tiggy, Bathsheba (a cat in an urgent need of a bath), Toby, Puchu, Mao, Gooney, Cheeni (a cat willed to a granddaughter by a cat-loving dadi.)

Two of my favourite pieces were both stories, “Prayishchit” by Bhagwati Charan Verma (translated from Hindi by Sakshi Agarwal), a story about the daughter-in-law of the house and a cat named Kabri, who stole whatever the daughter-in-law had cooked, and the resulting chaos that ensues, with just one person trying to benefit from the chaos — Pandit Paramsukh Chaubey.

The second story that won my heart was “The Trouble with a Cat” by Sandip Roy, about a gay couple Soham and Derek and their cat Dumbledore.

Ipsa Samaddar’s essay titled “The Secret Life of Cats” was both poignant and heart-tugging, about how a cat expresses her grief at the death of her kitten. Though “Khairi” by M.K. Ranjitsinh was about a tiger, it made for a good read. Gautam Chintamani’s piece titled “Talent” about the cinematic representation of cats in Hollywood and Bollywood was an interesting piece.

Varun Grover’s “Scenes from a Marriage (with Cats)” was an essay I thoroughly enjoyed. The cat names: Jaaneman, Dilbar and Chhenapoda had me chuckling as I started reading, but I quickly sobered up as Jaaneman went missing. I cried with Grover while he was searching in all the nooks and crannies of his apartment and the building for the missing cat. Vidya Rao’s “Love Story” was an essay on love and loss, of how she pines for Sufi, her cat. With grief lurking in her heart, she sees Sufi in other creatures.

Anushka Ravishankar’s “A Home for Eecha” is about a kitten abandoned by its mother on Ravishankar’s terrace. When Ravishankar started her mission of finding a home for their kitten Eecha, and the way she and her family judged the suitability of the prospective cat parents, made me laugh.

Between the pages of the book, you will find all kinds of cats, a cat who dislikes kitten food, but enjoys eggs and bits of bread moistened with watered milk, a cat with a penchant for a special kheer bought from a specific shop and fries from KFC.

Another essay I enjoyed was Gayathri Sankar’s “The Cat That Got My Tongue” about a campus cat’s shenanigans, where the cat is appointed as a professor and teaches a course to awe-struck students.

Jai Arjun Singh’s piece “Through the Sands of Time” about his mother’s cat Kittu and the cat’s strange telepathic connection with his mother, where his mother feels that Kittu had taken her illness on himself, making her recover, made goosebumps appear on my arms.

Teesta Rawal’s “Do My Parents Have Four Cats and One Child or Five Cats” had me checking how many similarities I have with cats. Quite a lot, I must say.
Seeing the five cats on the back cover, one got the feeling that the 32 essays, too, will emulate the cats featured in the cartoons, but sadly few of the essays were just ramblings without much mention of the felines they were supposed to feature, leaving me scratching my head in befuddlement. But many wonderful pieces more than made up for these shortcomings, transporting me into the room with the cats and their owners. During those moments it was easy to recognise the hold these furry creatures had over the humans. At some point I did wonder who owned whom? Who was the pet and who the master?