It’s hard to place a book like this. On the one hand, the point of the story is awesome. 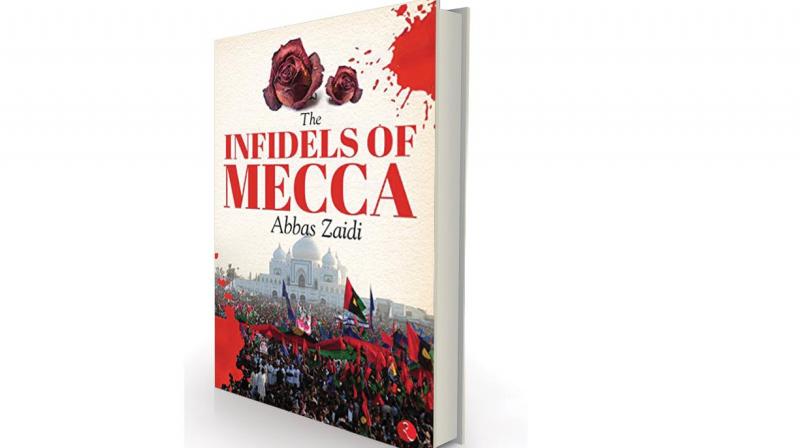 The Infidels of Mecca by Abbas Zaidi, Rupa, Rs 295

If you were to read Pakistani writer Abbas Zaidi’s The Infidels of Mecca very closely, as though you were a microbiologist seeking the presence of a particularly elusive microorganism in a patient’s bloodstream, I guarantee you will find a story. And not just any story. A good story.

But chances are that by the time you are six chapters into the book, you’ll have given up the search for a story. Any story. That’s how I felt, anyway, when I read it. I couldn’t figure out what the story was about, and even halfway through the book, I remained fairly baffled. And I was distinctly underwhelmed even when I finished it, shaking my head and wishing I didn’t have to write a review of it because that would mean wasting even more time on something that had taken me away from better books in the first place.

Fortunately for the writer, I took a day to think before tapping out my review. And I woke up the next morning screaming “eureka!” in my head, because 24 hours away from the banality of the writing and the soap opera dramatics of the young protagonist’s behaviour, I finally figured out that what had bored me to near tears only two days ago was actually rather brilliant in concept. The problem, however, is the execution of that concept.

The Infidels of Mecca is about 19-year-old Dara Shikoh, the son of Colonel Burq, a Pakistani Army officer close to late General Zia-ul Haq and most famous for destroying a Hazara village in Afghanistan. Having sweet-talked his way into the village, quoting the Quran all the way, and killed all the men, Burq falls in love with a Hazara woman and takes her back with him to Rawalpindi as his wife. Though the woman, Shah Bano, never forgives her husband for what he did to her family and village, and though she never gives up her Shia beliefs even in her husband’s family of hardcore Sunnis, out of this union arrives Dara Shikoh, named after the uncle who was murdered by his father.

It’s 2007, and at 19, college student Dara is totally spoilt by his older half sister Ruqia, who took care of him when his mother died. He’s the only member of his large family who has never been whipped for missing prayers, and the only one who has never been aggressively pushed towards the Army (even his brother-in-law, Ruqia’s husband, is an Army man). He has no interest in politics, but hangs out with a bunch of people who follow the Sufi Mansur al-Hallaj and believe that now that Benazir Bhutto has returned to Pakistan, there will be a revolution that will bring their country back from its jihadist philosophy against all but Sunnis, and lend to it a culture of religious and Marxist equality.

Dara is part of this group partly because of its leader, his college professor Umer for whom he has great affection, but mainly because of Laleen, the love of his life, a woman deeply interested and involved in politics. Laleen is an Ahmadi, a Muslim sect derecognised by Pakistan by Benazir’s father in 1974 because its prophet claims to be superior to the prophet Mohammed. She and Dara are completely and utterly in love, but while she wants him to meet her family, he is naturally wary of taking her to meet his.

Still, Dara wants to marry Laleen, and believes that if Ruqia were to meet her, his father could be persuaded to welcome Laleen into the family. So he plans a way to bring the two women in his life together in the evening after Benazir’s rally in Rawalpindi, the rally which all his friends plan to attend.

We know, of course, what happened at that rally. Not only was Benazir killed, but so, for the purpose of this story, were several of Dara’s friends, including Professor Umer, and, sadly, Laleen. What happens now? This I cannot tell you without spoilers.

It’s only when you question the title of the book — The Infidels of Mecca — that you really understand what this novel is about. And that’s when you think, well, that was actually rather stunning. The trouble is that details that go into the story seem totally irrelevant to what the story actually tells you. Dara is only 19 and spoilt silly, so yes, his love drama seems perfectly understandable. And the fact that this book is carried entirely on the shoulders of a confused adolescent makes great sense: his mind is open to possibilities and flaws, unlike the mind of someone who is convinced his way is the only way.

It’s hard to place a book like this. On the one hand, the point of the story is awesome. On the other hand, I suffered when I read it. So can I recommend this book to you? I really cannot say. Take your chances.