Snapshots of an Indian literary summer in Ireland 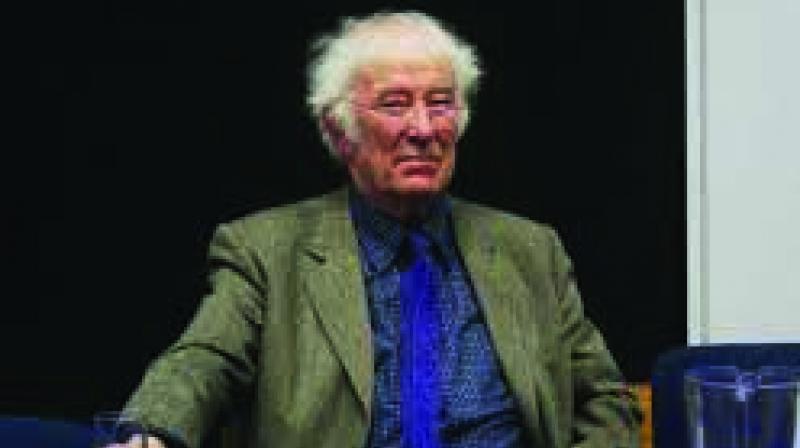 Belfast and Bellaghy sported a bridal look as Jaipur Literature Festival’s maiden Irish edition opened in June. The Lyric Theatre (Belfast) and Seamus Heaney HomePlace (Bellaghy) were draped in sarees, streamers, sequins — coloured ribbons and fluttering  flags, inverted umbrellas hanging from ceilings, pirouetting in the breeze — multi-hued, lively and redolent. An Indian summer had hit the Irish shores — both communities were out in force, expansive and joyous — celebrating food, culture and literature.

Northern Ireland is the home of Nobel Laureate poet Seamus Heaney, the film actor Liam Neeson, the internationally-acclaimed musicians Barry Douglas and James Galway, and the Booker Prize winner Anna Burns. JLF Belfast “focuses firmly on topics that are both contemporary and also reflect the concerns that our society has. There are many cultural parallels between Ireland and India — borders, languages, gender, nationality. The weekend brought together unbelievably brilliant speakers and people that are eminent in their field to be enjoyed by audiences from here and beyond,” remarked Roisin McDonough, Chief Executive, Arts Council of Northern Ireland.

Mahatma Gandhi’s granddaughter Tara Gandhi Bhattacharjee provided the keynote addresses. While she brought history, elegance and gravitas by her presence — she was not shy of critiquing the present political regimes, and urged that we could learn from the vision of the original nation-builder, before time ran out. She spoke variously with candour and intelligence, but always in a warm, positive and familial manner. Her starched, off-white, khadi sarees accompanied with bold solid-colour shawls, her slim frame and statuesque posture, her hair tied in a bun, the simplicity of her being and the sobriety of her discourse belied by an infectious smile.

The session on Gandhi featured his granddaughter; while the Tagore-Yeats panel highlighted the similarities and differences between the two poets, their fascination with each other’s work and worldviews, their ideas of freedom and nation-state. There was debate, adoration, dissent and even spontaneous singing of Rabindra sangeet by some of those present — it felt surreal, but fittingly appropriate.

The grand finale was reserved for ‘Famous Seamus’. Four panelists read a poem each, selected from Seamus’s work and also from their own. The poet Ruth Padel did a lovely reading of ‘Glanmore Sonnets No 1’; the translator Francis Jones intelligently read from Heaney’s Beowulf. My brother-poet Eric Ngalle’s haunting rendition of ‘The Rituals of the Molikilikili’ in English and Bakweri was resonant — a praise-song invoking African ancestors, a performance piece combining registers of oral poetry, inflection of Shakespeare’s Richard II, and a nod to Heaney’s play, Cure of Troy.

I chose to read my poem ‘Kargil’ dealing with common issues of conflict, borders and redemption — after which I recited Heaney’s beautifully-rooted poem for his aunt Mary, ‘Mossbawn: Sunlit’ where “…The helmeted pump in the yard / heated its iron, / water honeyed // in the slung bucket / and the sun stood / like a griddle cooling / against the wall // of each long afternoon.”  His aunt’s “hands scuffled / over the bakeboard, / the reddening stove // sent its plaque of heat / against her where she stood / in a floury apron / …. // Now she dusts the board / with a goose’s wing, / now sits, broad-lapped, / with whitened nails // and measling shins: / here is a space / again, the scone rising / to the tick of two clocks. // And here is love / like a tinsmith’s scoop / sunk past its gleam / in the meal-bin.” The poem is full of Heaney signature ingredients — alliteration, assonance, deep long vowels, language’s sensual feel, juxtaposing of the past and the present.

A personal high was meeting Heaney’s three brothers — Dan, Hugh, Charlie — his nephew Brian — in the audience, all of who live in the area. After my reading, one of them, holding a copy of my book to be signed, came up and said, “You are the second best poet and reader — after Seamus Heaney!” I was completely bowled over by the gesture — such grace and generosity of spirit — what an honour and what a treat!

And as I look back on the days that were, I recall a piece in The Guardian, quoting Seamus’s son, Michael Heaney on the Nobel laureate’s final note from his deathbed to his wife, Marie, which went thus: “in a text message he wrote to my mother just minutes before he passed away, in his beloved Latin and they read: ‘Noli timere’ — ‘don’t be afraid.’ ”  It is with hope’s positivity that we live on, and Heaney’s ‘noble’ last words are a testament to that faith.