Each of the Tests covered is a tale of valour and heroism — win, lose or draw. 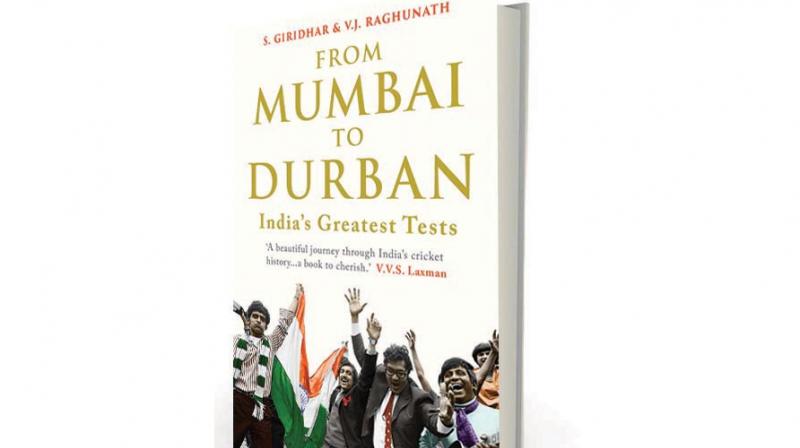 Books on sports, and cricket in particular, are a dime a dozen. Biographies, autobiographies, reminiscences, recollections and many more subjects fill the shelves of bookshops and online stores. When it comes to cricket, there are almost as many books as there are cricketers. The genre, in terms of authors, is understandably dominated by former cricketers, reputed commentators and sports writers leaving little room for a true amateur lover of the game, combining passion and love of writing, to make a mark.

Which is why the refreshing book writing forays of S. Giridhar and V. J. Raghunath need to be commended. Both of them are cricket fanatics, which is a given. While the former could turn his arm over for a bit of innocuous leg spin, the latter has played the game at first division league level. They are both academics by profession and ardent lovers of cricket at heart.

Their first book, Mid-Wicket Tales: From Trumper to Tendulkar, released a couple of years ago, was warmly received by critics and cricket aficionados alike. Their latest offering, From Mumbai to Durban: India’s Greatest Tests, lavishly produced and published by Juggernaut, is a wonderful sequel with a great deal going for it. The structure of the book, for a start: 28 Test matches, chronologically broken up into eras, have been subjectively selected by the authors as their choice for the finest games in the noble and long version, featuring India. And cannily, just in case a few experts perk up and go, “But what about the heartbreaking loss to Pakistan at the Chinnaswamy Stadium, despite Gavaskar’s brilliant 96?” or “The Kumble 10 wickets heist at the Feroz Shah Kotla in 1999?” the authors have an end section titled “Tests that Missed the Cut”, a list of nine matches that did not quite make the grade, though it was a near thing. Which is why the selection is necessarily subjective.

The different eras have been artfully broken up into period chapters: 1947-1969, 1970-1980, 1981-2000, and 2001-2010. As you delve into this cornucopia of finger lickin’ delights ranging from unheralded Jasu Patel’s nine wickets in an innings in Kanpur against Richie Benaud’s mighty Aussies, India’s record breaking 400+ chase against the West Indies in 1976 at Trinidad, down to V.V.S. Laxman’s unbelievable, match-winning innings, again versus the Aussies at Mohali in 2010, you come away feeling sated and panting for more. And there’s plenty more. Each of the 28 Tests covered is a tale of valour and heroism — win, lose or draw.

The extensive use of quotations from a variety of celebrated writers, cricketers and commentators, which pepper the pages of this tome, adds credibility and value, enhancing the reader’s enjoyment of the book. After all, the likes of John Woodcock, Jack Fingleton, Peter Roebuck, Tony Cozier, Harsha Bhogle, R. Mohan, Dileep Premachandran, Ramachandra Guha, Sachin Tendulkar, Rahul Dravid, V.V.S Laxman, Michael Hussey, Matthew Hayden and several other luminaries have graced the pages of this book. Famed cricket historian Gideon Haigh’s foreword and eminent sports journalist Sharda Ugra’s expert last words, end the volume eloquently. It is entirely appropriate that this collector’s item is available only in hardback. Plenty of historic and more recent photographs adorn the book, taking the reader on a visual nostalgia trip.

Of course, we must have our quibbles. What is a discussion on matters cricketing without a disagreement or three? Personally, I would have preferred a more stark and dramatic cover, with just the title leaping out at you, rather than the clichéd visual of jingoistic, flag-waving celebrations of Indian cricket fans, and a puzzling (and puzzled) elephant on the back cover, though there is an answering story behind it. At times the detailed descriptions of the matches’ progress tend to read like a daily newspaper report, which can get a tad tedious. Periodic references like, “But Kapil’s next two victims were clean bowled. Marsh’s stumps were uprooted by a sharp, low leg-cutter while Lillee was bowled by another accurate ball that swung into him in the air”, or “The Lankans got off to a poor start losing Michael Vandort in Zaheer Khan’s first over to a sharp low catch by Dravid at third slip”, are pedestrian to plough through in the midst of otherwise such silken prose. I would have gone for more opinion and descriptive passages, with the summarised scorecard, as shown, at the end. In extenuation, I must say the authors have achieved that in their introduction to each of the eras, against a canvas of the prevailing political and socio-economic background, which provides the raison d’etre for what follows.

In sum, one cannot praise too highly the authors’ commitment to presenting a volume, structured and ideated in a compelling and unique manner, and providing Indian Test match cricket with the exalted status it so richly deserves. This is particularly relevant at a time when the Indian cricket administration (if such a body actually exists) and the cricket loving public have been veering madly towards the limited overs format, which is more financially rewarding, and ironically, keeping Test cricket breathing stertorously on oxygen.

The sheer unmitigated joy of Test match cricket was never better exemplified than by these lines from a famous calypso, which the uninhibited West Indians joyously sang when they soundly thrashed England in the second Test at Lord’s in 1950, with the unlikely help of two spin bowling heroes.

Our two pals Giridhar and Raghunath may or may not have scored a home run (if you’ll pardon the mixed sporting metaphor) with their latest effort, but we Test cricket lovers owe them a debt of gratitude for their timely literary effort. This was a book waiting to be written.

Suresh Subrahmanyan is a brand consultant who loves music, cricket and good humour.