Modi’s pro-poor, anti-establishmentarian populism did not really translate into pro-poor policies or help the poor to improve their lot 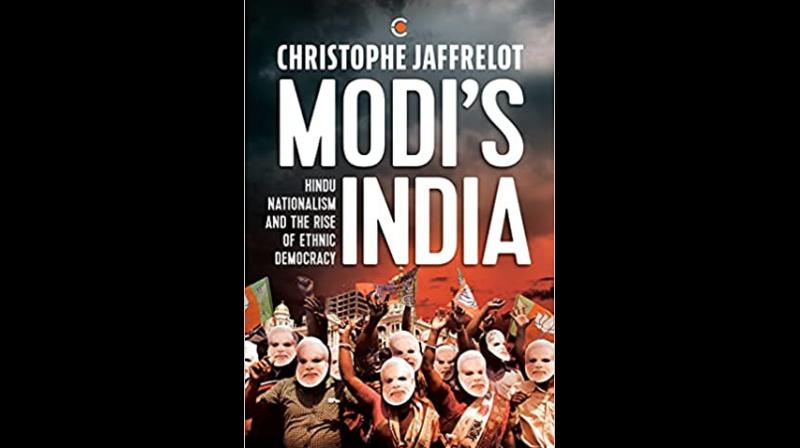 Cover image of 'Modi’s India: Hindu Nationalism and the Rise of Ethnic Democracy' by Christophe Jaffrelot.

It is tempting to dismiss Christophe Jaffrelot’s book as another liberal indictment of India in the reign of Prime Minister Narendra Modi because on the face of it his narrative appears to be so. But a careful reading shows that while drawing the predictable liberal conclusions, Jaffrelot reveals the underlying basis of right-wing politics that has become dominant in India even before the Bharatiya Janata Party’s distinctive victory in 2014 under Modi. And it is these underlying facts that should disturb the Indian liberals. Jaffrelot goes about his argument with careful definitions from the political scholars of the day like Ernesto Laclau and Sammy Smooha from the opposite ends of the political spectrum.

He says that the Indian democracy “framed by the Constitution in 1950” was conservative “despite the socialist rhetoric of its leaders, both Jawaharlal Nehru and Indira Gandhi. And the conclusion he draws is: “The democratisation of Indian democracy did not come about until the late 1980s when Rajiv Gandhi was beaten by a coalition of Opposition parties in many respects similar to the one that had triumphed over his mother in 1977. These two assemblages of heterogeneous forces had one essential characteristic in common: they were determined to do away with the hegemony exercised by the upper castes…”

While Narendra Modi’s political style has been identified as populist, there were specific characteristics to the electoral victory in 2014. Apart from the 10-year fatigue factor of the Manmohan Singh government, there was a shift in voting pattern: “…the percentage of BJP voters among the OBCs (the largest category, demographically) jumped from 22 to 34 per cent, whereas the proportion of the SCs who supported the party doubled.” And he asks the pertinent question: “What factors made Narendra Modi so attractive for these plebeian voters?” He finds that there are no opinions polls to gauge his popularity and falls back on the testimonies gathered by journalists Snigdha Poonam and Sheela Bhatt and draws the plausible conclusion: “Their respondents say they were drawn to Modi not only because he, too, came from lowly origins and was fighting against the establishment but also because he was a victim of it.”

Modi’s pro-poor, anti-establishmentarian populism did not really translate into pro-poor policies or help the poor to improve their lot. The pro-poor stance was rhetorical.

Jaffrelot argues convincingly that the upper castes, and he includes the dominant castes in this category, have made a comeback and now dominate the Modi regime. He also shows the anti-minority aggression of the government and the BJP towards them. He shows that during Modi’s first term the state was not directly involved in the discriminatory policies and actions, the state became a participant post-2019 election victory. Jaffrelot enumerates meticulously many of the words and deeds of intolerance, aggression and even violence. This part may be a little too familiar to the Indian reader but there was a need to put it all together. The media’s pro-regime servility is part of the spectacle.

The author is tempted to slip into large generalisations of Modi’s government’s majoritarianism, and it is this majoritarian tendency that he terms “ethnic democracy” following Israeli sociologist Sammy Smooha’s 1998 formulation in his “Ethnic Democracy: Israel as an Archetype”: “Ethnic democracy is located somewhere in the democratic section of the democracy-non-democracy continuum. Ethnic democracy is a system which combines the extension of civil and political rights to individuals and some collective rights to minorities, with institutionalisation of majority control over the state.” Smooha’s formulation has been criticised in the context of the “bi-ethnic” nature of the Israeli state. It cannot be applied to India without modifications to BJP’s domination of Indian society and state. And given Hindu right’s lack of sophistication of any degree, the space given to minorities moves into negative territory. Jafrrelot’s conclusions require both elaboration and debate. But the essential thesis is sound. Modi rode on the anti-elitist sentiment, but he is busy establishing the domination of upper caste/upper class in terms of monopolies and oligopolies in the economy and in society. The question is whether the new equilibrium can last.