Lesson of Arabian Nights: Your life hangs by a story 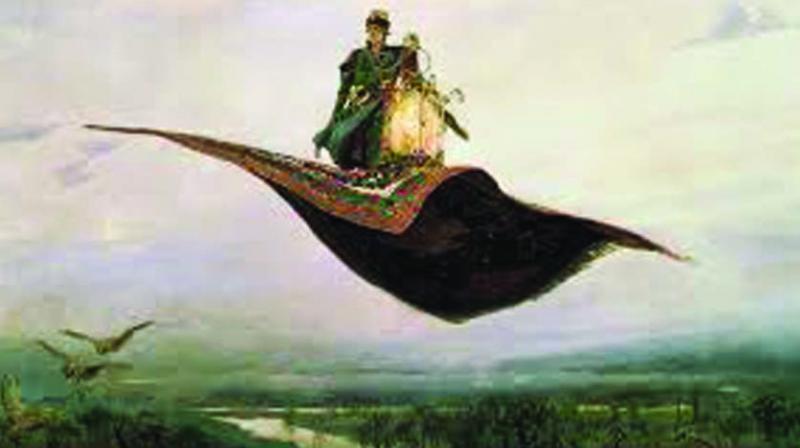 Alf Layla and his flying carpet

This year, the city of Delhi celebrated the ninth edition of Kathakar, an international event that celebrates the art of oral storytelling. For actors like Manoj Vajpayee and the singer Mohit Chauhan, it was reassertion of their identity with storytelling that could hold the attention of an audience that was otherwise so used to visual depiction of stories on a screen. To be sure, many of the tellers used props like harps, a bamboo stick, ankle bells and even a didgeridoo, a musical instrument from hollowed-out tree trunks, to make their performances even more effective. In a way, the storytellers at Kathakar were identifying themselves with a tradtion that began thousands of years ago, even before the discovery of writing.

Kathakar symbolised the universality of storytelling around the world. A Swedish storyteller spoke about the goddess Kali, another spoke about Slavic myths that were similar to Indian myths.

Storytelling is an art. Some of us are good at it while many of us can get nervous and tongue-tied in front of an audience. But what would you do if you were compelled to tell a story because your life depended on it?  Such a dilemma was faced by Scheherazade, the daughter of the vizier to the sultan Schahriar. The sultan after witnessing his wife betray him, a similar fate had befallen his brother Schahzenan, had taken a vow to sleep with one woman every night only to have her killed the next morning. As this caused great distress in the kingdom, it was Scheherazade who resolved to offer herself to the sultan and in so doing, would not only ensure her own survival but that of all the other women in the realm. All this against the wishes of a sorrowful father whose job it was to kill the women in the morning. Scheherazade hits upon a clever strategy to tell the sultan an absorbing story every night but finishing it and quickly continuing another only to leave it tantalisingly incomplete. In this way, the sultan is forced to invite her again the next night in order to hear the rest of the story. Thus, Scheherazade gains a reprieve for one night and this continues for a thousand and one nights. But Scheherazade is careful not to introduce the element of the story in the beginning. This comes by way of an intervention by her sister Dinarzade whom the sultan has graciously permitted to sleep in an alcove near their room. The sultan grants Dinarzade’s entreating request to hear of one more of the pleasant stories she had read, for the last time.

This reading tradition of Scheherzade is important and unwittingly perhaps, her own father had sown the reading habit in her. Throughout her childhood and adolescence, Scheherzade had devoured everything in her father’s library, from literature to philosophy and history. It is said even medical tracts did not escape her attention. She had acquired the reputation of a reader and a scholar and in her, we have our first example of a bookish heroine. Yet, she was not so lost in the fascinating world of books to be unaware of the world around her. The fund of stories that she relates to the sultan every night always leave him hanging for more , to know the ending. In this way, Scheherzade creates an audience for the serial story, the story that is unveiled and delivered to us in instalments.

The written-up story in its early forms was a story in a magazine that was continued in subsequent issues, sometimes for reasons of space but more because the publisher thought that the reader did not quite have either the patience or the attention span to read the whole story in one go.

Scheherzade’s storytelling sessions were to have a happy ending. The sultan was so enamoured that he married her and made her is queen while her sister Dinarzade married his brother Schahzenan. But the legacy Scheherzade left behind was more enduring. The Arabian Nights or One Thousand and One Nights has become a classic, the subject of so many editions and translations, with the oral tradition changing the stories with each telling and finally being written up in Arabic.

The earliest source of The Arabian Nights that survives is a small fragment from the ninth century CE. One side of the fragment contains the draft of a legal agreement drawn up by a lawyer for his client but the flip side contains the title page of One Thousand and One Nights. One may speculate as to why the lawyer used the pages of the stories as scrap paper. Perhaps he had been too busy to read them or having read them, did not wish to preserve them. But more importantly, this fragment is evidence that the stories of The Arabian Nights had been written up, sold, bought and even reused.

Where had the stories originated? A Baghdad bookseller, Ibn-Ishaq-al-Nadim, who lived a hundred years after the lawyer, surmised that they had originated in Persia where they were called Hazar Afsan or A Thousand Nights. The collection in Arabic was known as Alf Layla or A Thousand Nights. In the process, Arabian stories got added to the collection many of them set in Baghdad during the reign of the great caliph, Haroun-al-Rashid.

India too, has had a close connection with The Arabian Tales. Authoritative editions of the Arabic editions were printed in Calcutta twice (1814-18 and 1839-42). While today, Antoine Galland’s translation into French is the more widely used text, Richard Burton’s own translation was published in Banaras in 1895-6.  Both The Jataka Tales and the stories from The King and Corpse (or Vikram and Betal) formed important influences for The Arabian Nights stories.

The universality of these stories is best illustrated by a framing story that Scheherzade tells the sultan. During the reign of Haroun-al-Rashid, a scribe lived in the city of Baghdad. He was a copier of documents and was more happy in the company of books. Once, he had a strange visitor dressed in fancy clothes and speaking a foreign language. On being asked the visitor’s name, he replied what sounded to the scribe as “Hazar Afsan”. The scribe gave him an Arabic name, Alf Layla and taught him some Arabic words. At night, Alf Layla would entertain the merchants of Baghdad with stories. One night, Alf Layla met a djinn who gave him a flying carpet made of the finest paper. “It is better than a flying carpet because it’s very light. Just be careful and don’t tear it.” Alf Layla stepped on to the carpet and flew to Damscus and Cairo winning admirers everywhere. Not subject to age, it lived for centuries, till it got restless again. It now flew to Europe where a Frenchman taught it French. In England, an Englishman taught it English. Alf Layla was now feted across Europe.

But it had now become so famous that people began to ask questions, “Where are you from, what are your origins, who are your parents?” Scholars came to probe and examine Alf Layla, often tearing pieces of its paper carpet. Some declared it had Arabic origins, some said Persian. Others swore it had Indian blood.

Exasperated, Alf Layla had enough. “Don’t you understand I am an orphan? Those who go looking for my parents will only find themselves. I am the offspring of your own dreams and longings. Accept me as a part of yourself.” Alf Layla then gathered his tattered paper carpet around him and flew away!