Definitely not an edge of the seat thriller

The slow pace of the book is a big letdown as are the innumerable characters who flit in and out of the story. 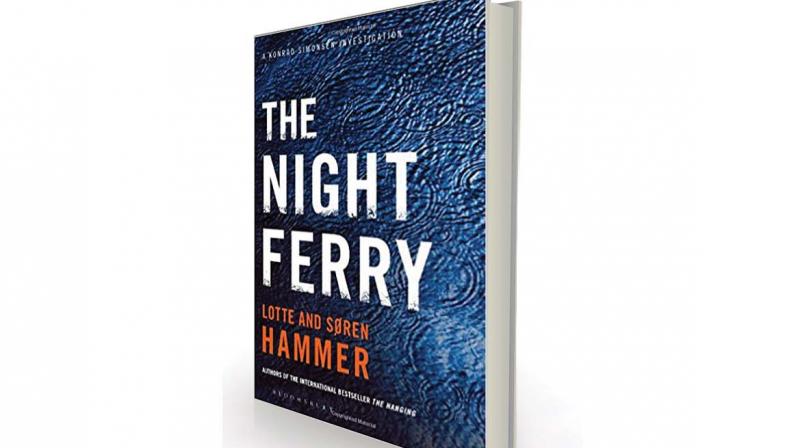 When the review copy of The Night Ferry by Lotte and Soren Hammer landed at my doorstep, I was very happy because the blurb said it was a thriller, and I love reading thrillers. I immediately started reading the book. The initial chapters reminded me of another favourite of mine, The Millennium Trilogy by Stieg Larsson, a voluminous book I had enjoyed reading a lot, but 45 is where the similarity ended.

The Night Ferry features Detective Chief Superintendent Konrad Simonsen (he is the homicide chief) and his motley group of policemen and policewomen.

The book starts on Sunday, 22nd August, 2010 in Central Copenhagen with a man standing on a bridge staring at a canal, waiting for a tour boat. No, he has no plans to go on a city tour. He jumps into the boat and kills the adults onboard: the captain, the tour guide, the teacher and two other people, leaving 15 horrified schoolchildren clinging to one another. While the man jumps off the boat, the canal boat meets with an accident, colliding into the DFDS Pearl Seaways. All the children except two die in the ensuing marine catastrophe.

In comes Detective Konrad Simonsen and his inner group consisting of his wife Nathalie Von Rosen called Countess, his right-hand man Arne Pedersen who has been recently appointed Deputy Homicide Chief, Klavs Arnold and a few other people.

It is only when the Countess visits the post-mortem room and is told the identity of the dead adults that the penny drops. When she is informed that Jonas Ziegler is one of the dead man, she asks to see the dead woman who was with him on the boat. The dead woman turns out to be Pauline Berg, one of the core members of Konrad Simonsen’s inner team. The Countess realises that this murder-cum-accident is linked to the investigation their colleague Pauline was doing on another case. Jonas Ziegler, a former forestry worker, was in contact with Pauline who had been obsessed with the Juli Denissen case which had been dismissed by the police department as a natural death but she had insisted that it was murder and had continued with her investigation.

Piece by piece, with footage from petrol stations, industrial areas, shopping centres etc, Konrad Simonsen assembles the missing pieces of the jigsaw puzzle. They get a breakthrough only after Simonsen appears on TV, asking for witnesses to come forward about what they saw on that Sunday morning on Battery Bridge. Luckily for Simonsen, one of the leads is promising; the witness recounts seeing a car stopping on the bridge and dropping off a man. Slowly, with the help of a series of clues, Simonsen’s team gets a picture of what the man looks like.

Trying to trace the man, Simonsen lands up in the ex-serviceman’s club and is told by an army veteran that the man was called The Pole; his real name is Bjorn Lauritzen and he has been legally declared dead by a court in May 2001. But when he questions more people, two army veterans swear that they had seen Bjorn Lauritzen at a funeral in 2006.

Simonsen starts to assemble the puzzle together. The man responsible for the murders is very much alive, that Bjorn Lauritzen is a soldier who was deployed in Bosnia in 1994-1995 as a part of the Danish Peace Keeping force and the woman driving him to the bridge is Judge Advocate Irene Gallagher. Now it is up to Simonsen to find out what actually happened in Bosnia — why Bjorn Lauritzen had been sent home early from Bosnia? Why, after returning home, he had continued to be paid as though he was still deployed abroad? Why and what made Judge Advocate Irene Gallagher convince Copenhagen to send her to Bosnia so that she can follow up her earlier inquisition with Captain Bjorn Lauritzen? What is Irene Gallagher’s connection to the canal boat accident and why is the Danish Army trying to protect her and block his investigations?

For me, the interesting bit was when Konrad Simonsen travels to Bosnia and visits the Danish Observation post called Little Denmark to piece together the rest of the puzzle with the help of a mysterious American diplomat. And another part I found exciting was when Irene Gallagher pins the murder (I can’t reveal whose) on the Homicide Deputy Chief, this woman is a smooth operator.

The slow pace of the book is a big letdown as are the innumerable characters who flit in and out of the story. The plot is weighed down by huge chunks that a ruthless editor should have deleted. It would definitely have hurried things along at a brisker pace. Overall, The Night Ferry doesn’t read much like a thriller. It is definitely not what I call an edge of the seat action-packed thriller. There is not a single element of suspense in it. Though the writing is decent, the snail’s pace induces many moments of boredom and the big revelation comes across as a damp squib and knowing the identity of the killer and his accomplice right in the beginning was a big irritant for me.

Thankfully, the ending chapter assailed my grouses with the way the story progressed. If not for that chapter, I would have been mighty cheesed off with this book. But even then, the book was a disappointment, perhaps my expectations were too much.