Reclaiming the ‘soul of India’ a tall task for next government

Sahay makes a pertinent and extremely worrying point virtually on the eve of the electoral season’s D-Day. 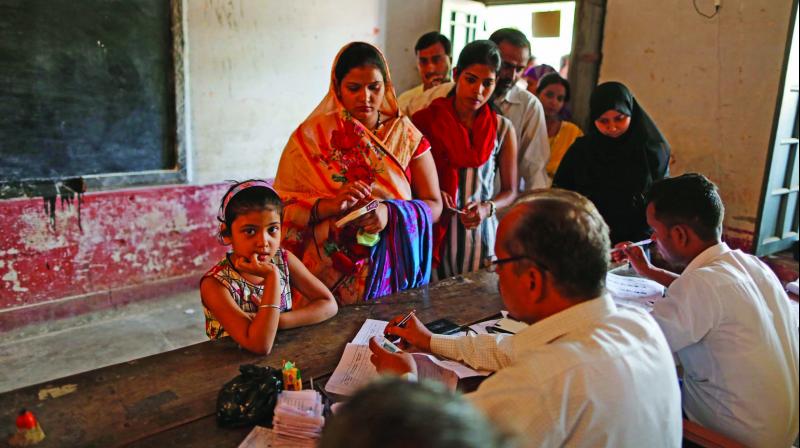 Officers check the identity of voters before allowing them to vote at a polling station in Prayagraj, UP. (Photo: AP)

Several critics classify authors who put together a collection of articles written over past few years as lazy. They argue this is the easiest way to have a book in your bag. This however, is not the case in the Modi era and especially for a journalist who has been as prolific as Anand Sahay. There is consensus that while the previous prime minister suffered from a deficiency of speech, the present premier lacked the ability to control it.

Seldom has there been a day that Prime Minister Narendra Modi not said something which was either provocative, outlandish, irrational, unscientific or sectarian. This has been a government which assumed office on the promise of development although its campaign was inlaid with majoritarianism. But, after taking charge, Modi’s engagement with development was merely through headline ideas and a series of alliterations, each devised with the idea to dazzle people and with little intent to do the hard work to convert an idea into a feasible programme.

As a consequence, writers like the author who chronicled the Modi years almost every week, if not every other day, have a problem of plenty when one sits back to choose what can be distilled from articles written and put it together as a composite whole. A confession is in order — time was when this writer was lured by temptation to do what Sahay has done with aplomb, but gave up because the task was too daunting and there was a danger of not been able to sift the necessary from the extra bits.

Sahay makes a pertinent and extremely worrying point virtually on the eve of the electoral season’s D-Day. He suggests that India's steep decline into becoming an ethnic democracy and an authoritarian majoritarianism has been so steady that “many social and political battles for the soul of India' lie ahead, no matter who forms the next government (sic)”. This contention is obviously based on the assessment that in imaginary indices of Hindutva, subversion of institutions, erosion of political values and shallowness of policy on crucial issues, the value of the Y axis (X axis in this case will comprise the years) has risen so sharply that an immediate return to “normalcy” or past levels will be extremely arduous, if not improbable.

This writer however, does not share Sahay’s optimism that a “BJP-led coalition government, but one in which the present ruling party no longer independently commands a majority in the directly elected lower chamber, it is unlikely to be able to continue with the present agenda of the RSS-BJP”. First, this is not Vajpayee’s BJP which was to some extent diffident of its own extremism. Second, this regime has the corporate backing which the previous NDA regime did not have and this backing holds immense capacity to swing opinion to one's viewpoint. Third, the gains of majoritarianism is recognised by even the allies and they would know that the BJP has been somewhat halted in its bid to regain absolute control, not for ideological reasons, but because of higher Index of Opposition Unity and lesser split of the anti-BJP vote over 2014 levels.

The book, containing a whole of 69 articles written over a period of five years, is easy to read and neatly divided into three sections: The first is on domestic politics and the overall situation in the country post 2014 and covers wide range of issues from entry of Priyanka Gandhi Vadra in politics to the sanskritisation of the nation which examines the BJP argument that secularists have had aversion to study and promotion of Sanskrit because  of its “Hindu characteristics”. This article written in 2015, attributes the controversial We or Our Nationhood Defined to the RSS’ second sarganchalak, MS Golwalkar. It is true that for a large number of swayamsevaks, the book is still the bible. But, for the past several decades, the RSS has declared that this book was not written by guruji, as they called Golwalkar, but was a translation of the Marathi original written by GD (Babarao) Golwalkar.

The RSS never clarified why for several decades the revered “spiritual” chief of the ideological fountainhead passed off someone else’s work as his own. Furthermore, in his September 2018 lectures in New Delhi, the current sarsanghchalak, Mohan Bhagwat declared that even the collection of Golwalkar’s articles and speeches, Bunch of Thoughts, have become outdated as several formulations had “outlived their purpose, because they were made in a particular historical context”.

The second part of the book chronicles the mishandling of situation prevailing in Kashmir. Sahay tracks the deterioration of the situation in the state from the mess that was created during the tenure of the BJP-PDP government. The author argued as far back as August 2016 that the Modi government had ended up “creating an unstable and volatile situation in Kashmir, playing right into Islamabad’s hand” which is described as an “unsatiated state that is trying to grab the territory using the bogud argument that it has proprietary right over a Muslim-majority area”. He covers the ground till the recent events including Governor Satya Pal Malik’s contentious style and the BJP's effort to consolidate majoritarian vote elsewhere in the country by pushing its case on Article 35A.

The third section of the book holds a collection of the author’s probing analysis of Modi’s much-vaunted, but extremely short sighted foreign policy, which was more aimed at securing personal glory than furthering national interests. A handy compendium, Sahay has selected a collection of his writings that provide a succinct and diverse narrative of the Modi years.

The writer is the author of Narendra Modi: The Man, the Times and Sikhs: The Untold Agony of 1984