A text like the Mahabharata will have to be understood in the specific cultural and historical context in which it was narrated and written. 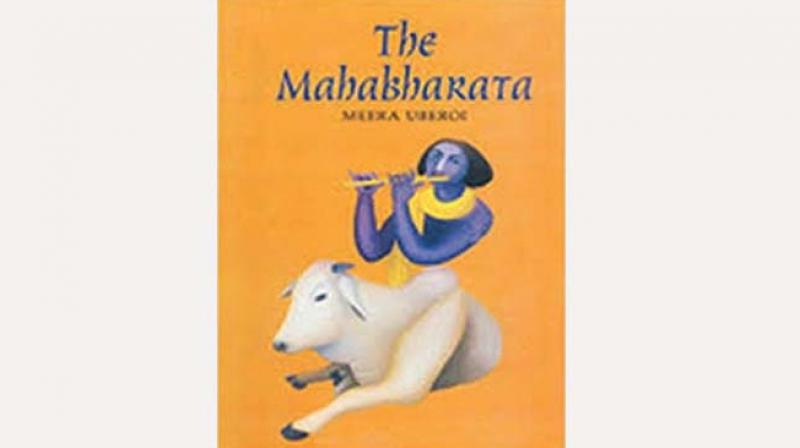 The recent controversy over the Indian epics like the Mahabharata and the Ramayana, even if rather unseemly and in poor taste, could all be put down to the heat of electoral politics but for the personal attacks which even asked for a prominent leader of the Left to abjure his first name! While charges and counter-charges are traded freely, personal attacks have taken another dimension possibly due to the extent of polarisation in these troubled times where any comment or remark is analyzed, dissected debated, categorised and eventually rejected with an equally provocative counter. While the remark by one political leader was on the extent of violence present in the Mahabharata showed that the people involved were as guilty of violence as any other, others justified the violence by saying that it was a dharmayudh a war to uphold natural law and justice, and to enable good to triumph over evil.

It was not a religious war at all.

We have no wish to go into the details of this debate. However, the reissue of Meera Uberoi’s The Mahabharata by Primus Books with the resplendent cover carrying the Manjit Bawa painting may allow us to look once again at this timeless epic that has survived down the ages with printing and reprinting, telling and re-telling, reading and re-reading and after being adapted into film, theatre and stage, not to forget translation into so many languages, both Indian and foreign.

A text like the Mahabharata will have to be understood in the specific cultural and historical context in which it was narrated and written. Even a culturally sensitive writer and adventurer like Andre Malraux had questioned the violence in the Mahabharata when he met Jawaharlal Nehru in a historic meeting in a Chinese restaurant in Paris in January 1936. Malraux’s question related more to Gandhi’s role as an apostle of non-violence and to adhere to the high principles of satygraha and non-violence in the struggle against the British. On the question of violence in the epic, Nehru reasoned that Krishna had tried every which way to reason and stop the war but when it became inevitable, sermonised with Arjun that it was now his sacred duty to fight even though his own kith and kin would die in their thousands. As far as Gandhi was concerned, Nehru pointed out that Gandhi wanted to raise an international brigade to aid victims in the first world war. On Malraux’s persistence, Nehru had replied disarmingly that Gandhi would participate in a struggle to “convert” the enemy to his own high moral and ethical standards.

It’s difficult ascertain whether any of the enemy in the Mahabharata were converted or not. The war ended in total annihilation of the enemy. Scenes from the war depicting graphic scenes of violence would leave people uneasy. The gory sight of Draupadi washing her hair in the blood of Durshasan, the killing of Karna when he was engaged in changing the wheel of his chariot or the entrapment of Abhimanyu in a chakravyuh or encirclement would perhaps raise questions depending on the reader or the beholder. While the Pandavas may have vanquished the Kauravas  and regained their throne, everyone paid a heavy price and things would now never be the same again.

Meera's version of the epic relates all this and more. What is striking is the cover visual and production qualities. Manjit Bawa’s painting on the cover is essentially non-violent as if both Meera and Manjit, alas no longer with us, were conveying a larger message. The cover depicts Krishna as a cowherd, playing his flute with an indolent cow sitting peacefully.

A hardcover priced at `295 also signaled the publisher's intention to have the book distributed and read as widely as possible. Earlier, the paperback rights had been leased out to Penguin with the same objective.

If we are to look at the Mahabharata from a publishing perspective, we need to marvel at the survival of a text through all these years. Its adaptation into film, theatre and television of course, gave a it a fresh lease of life. Riding piggyback on the television serial, the print versions sold as well. Both tapped into the expatriate and non-resident Indian market as well.

It's worth noting that the violence depicted in the Mahabharata or in the Ramayana for that matter has not become a part of the public discourse or debated with intensity till now. Citizens read them with interest and marveled at the stories and depiction of human characters with all their failings. If the violence and, sometimes, ambivalent moral attitudes among the protagonists were indeed to be discussed and debated then the debate will have to also estimate the impact these will have on impressionable young minds.

This can apply to epics of other faiths as well. The mark of a secular, diverse and plural society means that the epics may mean different things to different people and there could be different interpretations as well. Indeed, we now have a tradition of different Ramayanas in the country. This is only natural in a country as diverse as ours. To take a unilinear view and impose only one interpretation would not be right and would perhaps be an injustice to the beauty of the epics themselves and to other traditions and practices. If a certain rendering or interpretation becomes an article of faith for some people, so be it. As long as others are free to believe in another version or tradition.

World history has shown us that most conflicts arise from imposition of beliefs on people whose diversity is neither acknowledged nor celebrated. Imposition only creates more tension, conflict and even retaliation. Such a society will become conflict ridden and see only a spiralling of violence. A cry that our faith is in danger can become a rallying point for the wrong reasons. This is distressingly similar when charged with an alleged misdemeanour, to say “the whole institution is in danger” and worse, get people to believe it.