There is little in Singh’s book by way of clues to the committee in its effort at solving the complex communal puzzle. 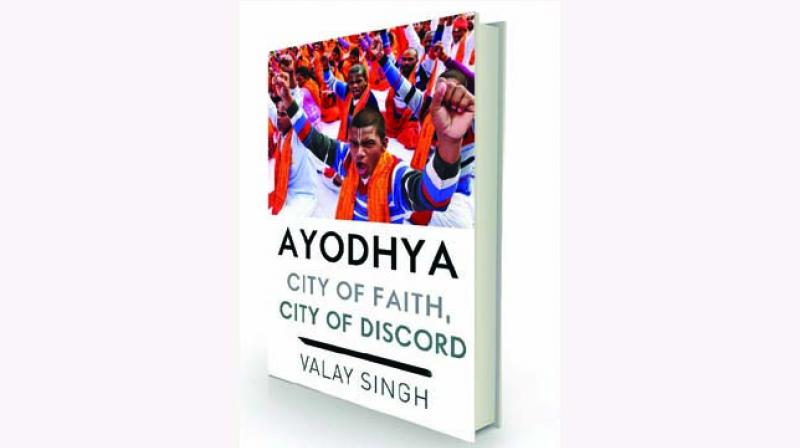 The cover title of the book would suggest that even without turning a page we know what it is all about. Since the late 1980s Ayodhya has been lodged into the consciousness of most Indians as a metaphor for growing discord and bloody violence between Hindus and Muslims because of the as yet unsettled Babri Masjid-Ramjanmabhoomi dispute. Yes, Valay Singh’s Ayodhya: City of Faith, City of Discord is about the smouldering conflict which continues to hover ominously over the entire country.

However, the book is not just about the long pending dispute over a few acres of land, of Hindu-Muslim, mandir-masjid. The meticulously researched text by the journalist unravels for us the fascinating 3,300-year-old history of this “sleepy city” in north India which for centuries had been considered sacred space not only by the followers of Hinduism but Buddhism, Jainism and Islam as well.

For example, did you know (I did not) that among the Muslims of the region the significance of Ayodhya is not limited to the Babri Masjid which was demolished by Hindutva’s kar sevaks on December 6, 1992, or the fact that even today several dozen mosques dot the city’s landscape? According to the author, “Ayodhya is called Khurd Mecca (mini-Mecca) or ‘Ayodhya Sharif’ [holy Ayodhya] even now?” (p 145).

Or, did you know (I did not) that Nageshwarnath, the oldest temple in Ayodhya, is dedicated not to Ram but to Shiva, that “as in most of the country, Shiva worship preceded the cult of Ram in Ayodhya as well”? Before the Vaishnavas (Ram bhakts) finally emerged victorious in the 18thcentury, “Vaishnavism had to encounter the violent and bloody obstacle of Shaivaism in north India” (p 59). Singh quotes from the biography of one Devmurari (16th century) to record: “’The daily ritual of Shaivas was to kill four Vaishnavas before doing datoon (brushing teeth)’. And on days when they couldn’t find a Vaishnav to kill the Shaivas would make voodoo-like doll-Vaishnavas out of dough and slit their throats.” (p 60).

In other words, long before the Hindu-Muslim conflict in Ayodhya there was the bloody intra-Hindu feud, not to mention the targeting of Buddhists by Hindus earlier. On the other hand, the eruption of the Babri Masjid dispute — for the first time in 1885 — was preceded by long years of Muslim-Hindu accord and the flourishing of a composite culture (Ganga-Jamuni tehjeeb) while the Muslim nawab-kings ruled in the Awadh region, of which Ayodhya was the capital before being shifted to Faizabad nearby and to Lucknowsubsequently.

Singh quotes Lala Sitaram, the first British-era chronicler of Ayodhya’s history who wrote of Nawab Asif-ud-Daulah’s munificence thus: “He was famous for giving large donations. Thousands of rupees were given to Brahmins from the royal treasury. Ayodhya’s Hanumangarhi [much revered temple dedicated to Lord Hanuman] was built during his time and stands as a testimony to his religious good”. (p89)

The decline of the Mughals and the nawab-kings of Awadh following the arrival of the British in India coincided with the deterioration in Hindu-Muslim relations in Ayodhya. It is a widely held view among historians that, “the first recorded Hindu struggle for Ram’s birthplace dates back to 1855”. That’s when Muslims attacked Hindus in retaliation for alleged demolition of a mosque in Hanumangarhi. (p 98).

The year 1885 marked the birth of the legal dispute over Babri Masjid when Mahant Raghubir Das of the Janmasthan temple filed a civil suit in the court of the district sub-judge of Faizabad, seeking an order to construct a temple over the Ramchabutra, a raised platform abutting the Babri Masjid. It is significant that until then there was no claim that Lord Ram’s birthplace was exactly on the spot where the Babri Masjid itself stood. His plea in the lower court, as also subsequent appeals before the district judge and the judicial commissioner of Oudh were rejected.

Ayodhya is a book in two parts. Book 1 begins with the city’s early history and ends with the ‘Indian Rebellion of 1857’ (many call it India’s first war of Independence from the British). Book 2 spans the period post-Independence till date.

In recent decades, local guides in Ayodhya have confidently asserted before visiting Hindu pilgrims that, one, “It has been nine lakh and fifty-six thousand years since Ram left Ayodhya for heaven, taking his subjects who loved him dearly along with him”; and, two, Babur destroyed the Ram temple that stood at his birthplace in 1526 and built a mosque over the ruins using “the blood of 1,76,000 Hindus to prepare the mud mortar”.

Relying on facts instead of myths, Singh informs us that the Babri Masjid premise itself was proclaimed as the actual birthplace of Lord Ram after an idol of Ramlulla “miraculously” appeared within the mosque premises on the night of 22-23 December 1949. On the morning of December 23, the then District Magistrate of Faizabad, K.K.K. Nair, sent a radio message to UP’s chief minister, chief secretary and home secretary that read: “A few Hindus entered Babri Masjid at night when the masjid was deserted and installed a deity there… Police picket of 15 persons was on duty at night but did not apparently act”. (p 189).

This notwithstanding, thanks to political subterfuge with bureaucratic connivance and failure of the judiciary to intervene expeditiously, from then until 1986 the gates of the Babri Masjid remained locked, Muslims were denied the right to offer namaaz inside, but Hindus were permitted to worship Ramlulla from outside the mosque while his idol remained undisturbed within.

Fast forward to 1984, when the Vishwa Hindu Parishad (VHP) elevated what until then was a local dispute to a national platform with the launch of the Ram Janmabhoomi Mukti Yagna Samiti. Two years later, in 1986, in a brazen instance of pandering simultaneously to Muslim and Hindu communalism, Prime Minister Rajiv Gandhi’s government misguidedly chose to balance its appeasement of Muslims in the Shah Bano case by engineering the opening of the gates of the Babri Masjid for Hindus.

As was only to be expected, before long the Sangh Parivar snatched away the “Ayodhya card” from the Congress and used it to the hilt in its bid to political power. The demolition of the Babri Masjid on December 6, 1992, under the watch of the BJP government led by Kalyan Singh in UP, the Prime Minister Narasimha Rao-led Congress government at the Centre, and a Supreme Court which failed to read the ominous signs, is part of that sordid story.

Missing conspicuously from Singh’s otherwise meticulously researched account is the report of the Liberhan Commission, which is a searing indictment of the insidious role played by the entire BJP/VHP/RSS leadership, the UP state bureaucracy and the police, and Muslim communal leaders in the brinkmanship that took the Indian republic to the abyss in December 1992. Albeit obliquely, Justice Manmohan Singh even questioned the role of the Supreme Court.

A three-member committee headed by a retired judge of the Supreme Court (a Muslim) is currently at work in an attempt at the Supreme Court-mandated effort at mediation to find a resolution to the decades-old dispute. Among the three mediators is Sri Sri Ravi Shankar, who is on record having warned that any obstacle in the building of a Ram temple where the Babri Masjid once stood will only lead to more bloodbath.

There is little in Singh’s book by way of clues to the committee in its effort at solving the complex communal puzzle. But that does not in any away belittle the importance of Singh’s book in unveiling the role of the various institutions of post-Independence “secular India”, the judiciary included, in the unraveling of a Hindu majoritarian agenda, with more than a little help from a communal Muslim leadership.

The writer is convener, Indian Muslims for Secular Democracy and co-editor, SabrangIndia Online