A #MeToo story, but not exactly sparkling

Anshu, the heroine, is a strong woman, a successful businessperson, a woman who’s been through pain and loss. 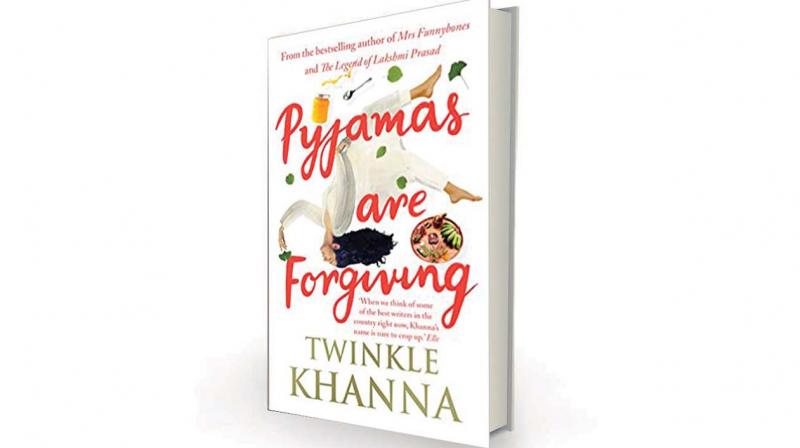 I wonder if celebs who write books feel the burden of reviews as much as the reviewers do. After all, people will buy their books either out of devotion or to see if they can really write. They will get press that reaches out to people who don’t usually enter bookshops. Sales are guaranteed. So what use is a review?

On the other hand, celebs are people too. (I think. They might think they’re gods.) Venturing into an area beyond what they are already known for may just bring out a need for an honest opinion of their work. But can reviewers be honest about books written by celebs? At best they would second-guess themselves, wondering if they are being too harsh just because the writer is already famous, or too kind for the same reason. At worst, they would simply set out to destroy or to suck up.

Which is why I must shamefully admit that it was only a sense of curiosity coupled with cheapness that led me to agree to review Pyjamas Are Forgiving by Twinkle Khanna. I wanted to know what the fuss was about, but I thought the Rs 325 the book costs would probably be better spent on another book. A review copy would sort that dilemma. And it did its job, but now I am faced with another dilemma — how do I adequately convey to you the fact that I was both impressed and unimpressed by it? How do I make you believe that it is better than I hoped it could be, but could be so much better? All I can do is try. So here goes.

For starters, I was impressed because much as the title, the cover and the blurb of this book project it as a fluffy, funny read (and there’s a lot to be said for books of that kind), Pyjamas Are Forgiving is actually pretty honest about life. This means that it can get quite dark in a way that many of us — at least the women — could probably identify with. Anshu, the heroine, is a strong woman, a successful businessperson, a woman who’s been through pain and loss and pulled herself together again. But she can be insecure, she can be manipulated, she can let her emotions get the better of her, and she can surrender control over events and situations even when she knows she need not and indeed, must not.

The story is set at an upright Ayurvedic medical centre in Kerala where people go for a minimum of three weeks to balance their doshas via ghee purgations, sattvic khana, white kurta-pyjamas and little or no contact with the outside world unless they step beyond the gates of the centre.

Anshu’s been going there for years. It’s her safe place, from which she will emerge cleansed and calm. But there will be no calm for her this time because by sheer coincidence, her ex-husband Jay and his new wife Shalini are at the centre too, accompanying — Jay’s wealthy but crass cousin Lalit who may, in this place, finally be persuaded to fund Jay’s entrepreneurial venture.

Anshu’s first thought is to flee, but second thoughts prevail and she refuses to let Jay and Shalini drive her away from her place of peace. It isn’t easy of course, though she has fortunately made friends already, particularly wispy Jenna, a gymnast who uses her body as installation art, but appears to be under-confident and in need of mental support.

But the attraction Jay holds for Anshu is too strong. It does not take long before the two of them are sneaking off behind Shalini’s back, Anshu revelling in the comfort and familiarity she and Jay seem to hold for each other. She argues with herself often, pointing out how deluded she probably is, how ironic it is that she who was displaced by the other woman is now the other woman herself. But no logic works.

Then there are several hard truths to face.

Jenna has been raped by Lalit — will Anshu be able to persuade Jay that this needs police intervention? Or will Jay use his manipulative charm to persuade Anshu instead that Jenna invited Lalit’s advances, and that when Jenna slips and falls unconscious from the porch after an altercation with Lalit and Jay, Anshu should lie just a little to leave Lalit out of it, so Jay can get the funds he needs?

Anshu has found throughout her affair with her ex that she still accepts all his half-truths and excuses, even though she knows full well what they are. But now, when Jenna lies possibly dying in a hospital, what will Anshu do? And having made her decision, what will become of her?

The story of Pyjamas Are Forgiving works very well, especially in the age of #MeToo. But I was unimpressed by the quality of the writing. It is not quite banal, but not exactly sparkling either. Anshu’s voice as the narrator is too flat, too even in tone to make the story come truly alive.

This does not mean that I regret the time I spent on Pyjamas Are Forgiving. But it does mean I’m glad I didn’t spend my own money on the book.

Maybe, by her next novel, Twinkle Khanna will have got a handle on her writing. Then I would gladly buy my own copy of the book.