Books   16 Sep 2018  Democracy past its prime, but still resilient
Books

Democracy past its prime, but still resilient

Finally there is the fear of a technological takeover. Current-day unintelligent but super-efficient machines already have the ability to learn. 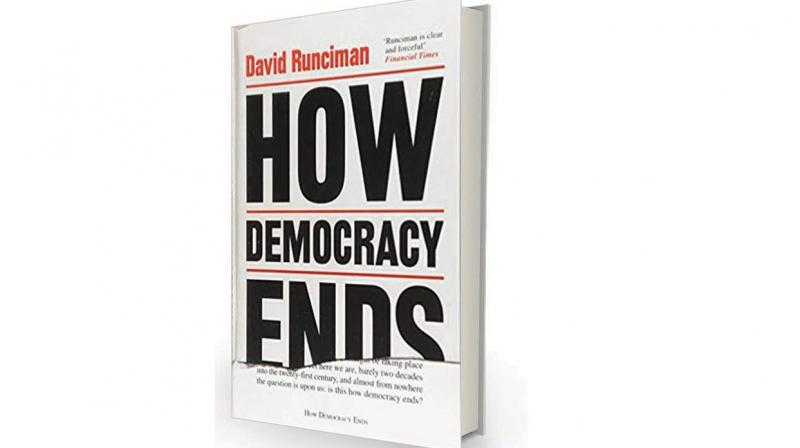 In the summer of 1989, as the Cold War was drawing to a close, a 36-year-old American political scientist, Francis Fukuyama, shot to global fame with his “End of History” thesis, celebrating the final victory of liberal democracy over its ideological rivals: fascism and communism. Today, less than three decades later, if anything, the world is preoccupied with the prospects of the “end of democracy”. Many believe the world today is close to where it was in the 1930s and the spectre of fascism looms large over countries as far apart as the Philippines, India, Turkey, Hungary, Russia, the US... With several books having already been written, How Democracy Ends authored by David Runciman, a professor of politics at Cambridge, is the latest and the most novel one on the subject.

In our troubled times Runciman begins with the comforting thought that “we are not at a second pre-dawn of fascism, violence and world war. Our societies are too different — too affluent, too elderly, too networked — and our collective historical knowledge of what went wrong then is too entrenched”. That’s where the good news ends. Runciman too believes that the likelihood of democracy’s demise is real but he argues emphatically that “history does not go into reverse”. He cautions us to stop “looking in the wrong places” or else “we may not even notice” as democracy slowly unravels before our eyes. History is of course important concedes Runciman but warns that “our obsession with a few traumatic moments in our past can blind us to the many lessons to be drawn from other points in time”. The book draws lessons from the 1890s, 1650s and the direct democracy of the ancient world.

Where then should we look, how do we begin? Runciman wants us to begin by thinking of Western democracy as a human being going through a “full-blown, mid-life crisis”. Contemporary representative democracy is, according to him, “tired, vindictive, paranoid, self-deceiving and frequently ineffectual”. It faces a real threat from three possible quarters: coups (violent overthrow of democratic institutions), catastrophe (nuclear war, calamitous climate change, bio-terrorism) and technological takeover (intelligent machines outsmart human intelligence).

From democracy’s many past deaths across the world we have learnt to recognise a coup d’etat as a “spectacular event”: tanks surround the city overnight, soldiers seize key communication points, Prime Minister and important political opponents arrested, Parliament occupied, etc. Greek democracy, for example, was overthrown by such a coup in 1967 and the military ruled for over a decade. Since 2010 Greece has once again been in dire straits, with “conditions that look ripe for another coup”. But this time there has been no coup in sight. Runciman has an explanation: “Greek democracy today is relatively battle-hardened, having been around for nearly half a century… coups are only possible in nations where democracy has not had the time to develop roots.”

Not just Greece, citizens of any country who have tasted democracy will resist its violent overthrow, Runciman argues. However, for the enemies of democracy non-violent, non-spectacular coup options also exist. There is “executive aggrandisement”, for example: “when those already in power chip away at democratic institutions without overthrowing them”. This, according to Runciman, is what is happening today in “India, Turkey, the Philippines, Ecuador, Hungary and Poland” and possibly in the United States as well. To Runciman, executive aggrandisement “looks like being the biggest threat to democracy in the 21st century”. Executive aggrandisement becomes possible when citizens begin to take democracy for granted, when representative democracy degenerates into a “zombie democracy”.

Then there is the threat of a catastrophe precipitated by a nuclear war, calamitous climate change, or bio-terrorism, spelling the death-knell of democracy. Runciman fears this danger is all the more serious today because of complacency, an “apocalypse fatigue” that has crept in. The possibility of disaster once had a “galvanising effect” on citizens. But now “we have become relatively inured to apocalyptic descriptions of our future because we have been exposed to so many of them”.

Finally there is the fear of a technological takeover. Current-day unintelligent but super-efficient machines already have the ability to learn. “It is machine learning that tells Google what you are searching before you have quite realised it yourself”. What happens when intelligent machines with a mind of their own choose to take full control of our lives? “Whenever we go online to dig up new information for ourselves, we end up handing ever more information about ourselves to all sorts of interested parties… It won’t be killer robots that enslave us. All it takes is ruthless individuals capable of using machines.” At one point Runciman asserts that “Mark Zuckerberg is a bigger threat to American democracy than Donald Trump”.

With so many dangers lurking on the horizon, does democracy have any future? Runciman’s answer is a qualified yes. In countries, which have yet to get a taste of it, democracy may strike fresh roots and flourish in the coming period or they may opt for Chinese-style “pragmatic authoritarianism”.

But after a remarkable 100-year run “mature Western democracy is past its prime” and is “winding down in the places where it has had its greatest successes”. Think of how modern science has given us an extra lease of life. Similarly, democracy will “almost certainly” have a drawn-out demise. “Artificial enhancements, delays and technical fixes can keep it on life support almost indefinitely.”

How Democracy Ends makes for a fascinating, intriguing and challenging read because throughout the book even as Runciman talks of the end of democracy one moment, the very next moment he hastens to emphasise its resilience. Perhaps the enigmatic last two sentences of the concluding chapter say it all: “This is not, after all, the end of democracy. But this is how democracy ends.”