Dopehri, however, takes place in Lucknow, with a visibly strong sense of place and time, with Amma Bi’s haveli as centerstage. 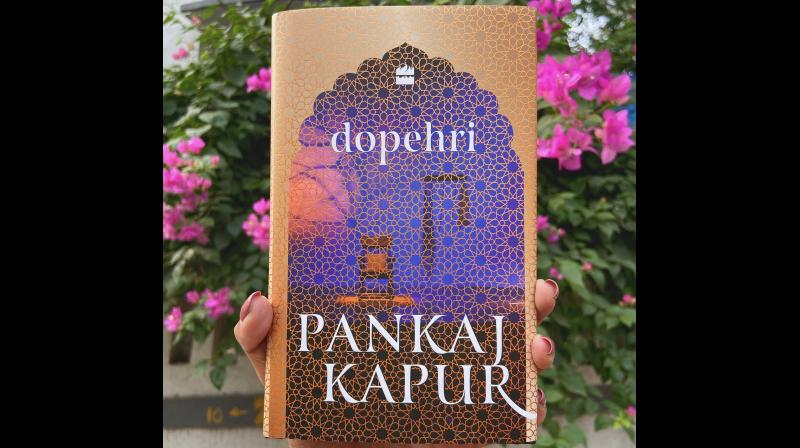 Amma Bi, the sharp-tongued 65-year-old begum of the desolate Lal Haveli in Lucknow, is having a bit of a crisis. Every afternoon as the clock strikes three, there comes “the sound of footsteps, the rustling of leaves, a shadow outside the door.” If only she wasn’t alone, if only there was someone to catch that shadow, rues the lonely and melancholic Amma Bi. But her son has flown the nest, her husband has passed and her house help Jumman is not one to stick around all day to keep her company. And so in the lively and evocative novella Dopehri with a regal, lyrical cover, actor Pankaj Kapur tell the story of loneliness and ageing, and of the joy of finding love, laughter and a sense of purpose again, in entirely unpredictable ways. It could have been grim, but its remarkably sunny and moving.

Kapur wrote this novella meant for film in 1992 in Hindustani. The book has been performed on stage as a one-act solo reading by Kapur across the world. I read the recently released English translation by editor Rahul Soni, and also heard recordings of Kapur reading excerpts from the original story. The transition from Hindustani to English is seamless and faithful, retaining the deeply acerbic sense of humour, striking visual richness and finely detailed web of nostalgia. The “noontime tale” sprang from a thought that came to him during a visit to a building in Dadar in Mumbai where his wife Supriya Pathak’s mother lived, Kapur has said. Imagining how an old lady would react to the thud-thudding sounds produced by anyone walking on the old wooden staircase in those quiet, dingy quarters, Kapur had found the germ of an idea, and he finished writing the novella in four days.

Dopehri, however, takes place in Lucknow, with a visibly strong sense of place and time, with Amma Bi’s haveli as centerstage. Her days are sad and empty, with not much to occupy her but the comings and goings of Jumman and their little skirmishes, and daydreams consisting of visions that include her family, and herself riding in their shiny new 1936-model Austin dressed as a bride. The car now lies in the courtyard, abandoned and decaying, like Amma Bi herself. But when she imagines a ghost or two lurking in the haveli, baying for her blood, her close confidante Saxena Saheb insists she take in a female lodger. When the lovely, mysterious Sabiha walks into the haveli, Amma Bi is overjoyed — but she gets more than she bargained for. In under 100 pages, Kapur’s story is crisp and absorbing, its comic lightness growing on you sneakily, with a neat, satisfying arc that feels timeless.

If indeed this story makes it to screen — as Kapur has said it might, — Dopehri’s delightful imagery should come in handy. Within these pages, the time of day shifts as perceptibly as the power play between its chief characters. As the day wears on, their sense of ennui is overshadowed, in Kapur’s imagination, by the physical elements surrounding them — the haveli’s gate, Amma Bi’s paan box, the Sun, the Moon — that turn into breathing, living things, watching over her in her deserted home. “In the winter morning, when a tonga stopped in front of Lal Haveli, the main gate saw its own Amma Bi alighting from it. Amma Bi touched the gate with such affection that its old bones came alive, and when she pushed it open with both hands, it shrieked as if from joy.” On other occasions, “the big block made many successful attempts to wake her”, “the night and desolation grinned”, and “when the sound of the alarm spread out through Lal Haveli, its courtyard and veranda, its rooms and corridors all woke up after years of slumber”. And the ghosts? Only the readers are made privy to the answer to this mystery, not Amma Bi. But she’ll survive.