Occasionally, Verghese lapses into cliché, the writing can come across as uneven and hurried. 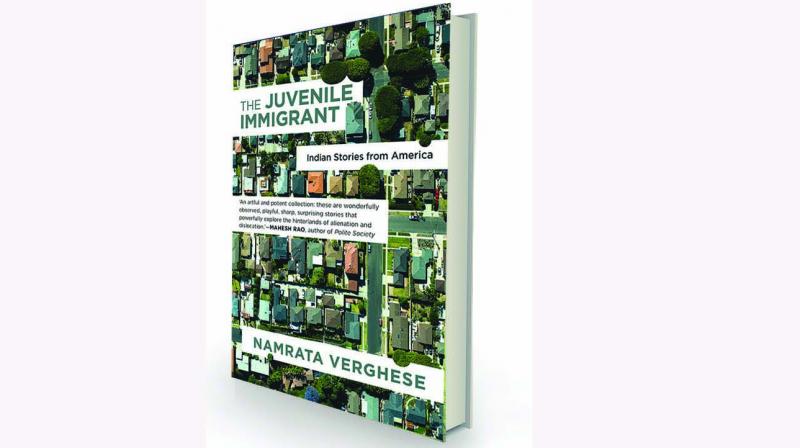 It’s been a terrific year for the Indian short story in English. Unni R took us on a slow hop through Kerala in One Hell Of A Lover; Aruni Kashyap gave us Assam uncut, while simultaneously exploring the Assamese-American experience in My Father’s Disease. Namrata Verghese, in The Juvenile Immigrant, her debut collection, explores identity, race and gender in the Malayali-American context. These are sparkling stories, freshly minted, that tackle love and interiority with a deceptively light touch. There were times I was reminded of Farrukh Dhondy’s Trip Trap and Come to Mecca, ostensibly written for ‘young adults’, and classics of the immigrant story genre.

A Hindu teenager eats a Big Mac to beat peer pressure from her American friends: “She found the burger delicious, but forced herself to throw it up within minutes. It hadn’t polluted her for too long.” In ‘Monsoon’ the protagonist discovers a master-key vocabulary on entering college: “I learn the words. I wield them proudly and desperately, this long-awaited lexicon that promises to explain, to help. To heal. Microaggression. Hegemony. Discrimination. Gaslighting. Trauma.”

An Indian boy, adopted by a gay couple, grows up happy with his two American dads, but as an adult at American airports is often “mildly surprised” when he’s pulled aside for random pat-downs: “Sometimes, he forgets his insides don’t match his outsides.”

Verghese is good at pinning dialogue. A typical Indian busybody aunty makes small talk with her friend about which high school the latter’s daughter should join: “It all starts there, you know.” On learning of her friend’s newfound interest in gardening, Anu Aunty says: “Oh! I'm so glad you are keeping busy.” A boy recognizes his newly-born sister in a hospital ward, “the only brown baby in the room of red and pink babies.”

Arranged marriage plays an oversized role in immigrant writing, and there is plenty of it here, though Verghese manages to imbue it with some newness, especially in ‘Family Secrets’ which manifests itself as a situational comedy set in a matrilineal society. In ‘Neurons and Hormones’, the protagonist, Thomas, finds himself rejected by the bride’s side for being “too poor, too dark, and most damningly, too Mar Toma (the wrong type of Christian)”.

Occasionally, Verghese lapses into cliché, the writing can come across as uneven and hurried. For instance, this ready-made image that seems to be drawn from innumerable films, starting with Bobby: “A woman opens the door, stringy hair falling out of a haphazard bun. She’s been cooking, she explains.” Or sentences like this one: “The heat has nothing to push against, nothing to beat.” When writing prose, argued Martin Amis, avoid using words that rhyme in the same sentence.

But then, the author redeems herself in passages of great lyrical beauty (and terror). Here is Mary giving birth: “...crouched on all fours amid straw and dung, her cervix dilating like everyone else’s, her baby god pink and slimy... Her body ordinary and girlish, bent in pain — human pain, the pain of everyday miracles.” The lines are from ‘Butter Chicken’, perhaps the most pitch-perfect story in the book. “Even as a child, Beena has studied Mary’s serene statue and wondered how, just hours earlier, she could have been crying out on the floor of the barn, a small god pressing on her uterus, damp with the same womanly wetness that Beena felt then.”