Let’s imagine you have just started a new job at a big company, and you’re invited to a party where you want to make a great impression. 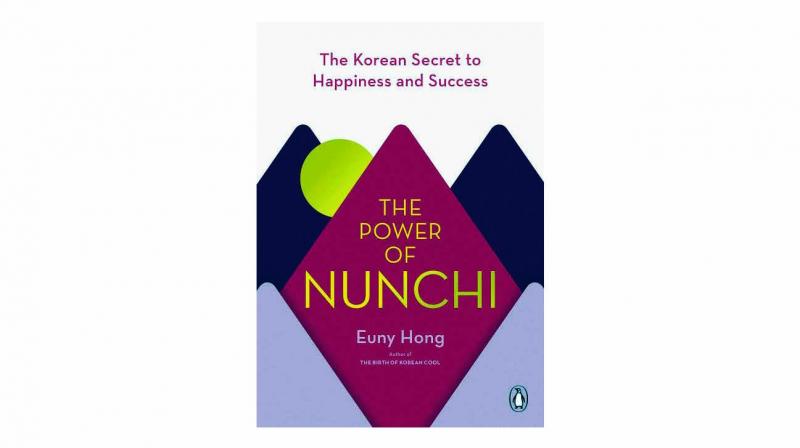 The Power of Nunchi: The Korean Secret to Happiness and Success, by Euny Hong Hutchinson/Penguin Random House pp240, Rs 499.

Nunchi (noon-chee): ‘eye measure’, or the subtle art of gauging other people’s thoughts and feelings to build harmony, trust and connection.

Let’s imagine you have just started a new job at a big company, and you’re invited to a party where you want to make a great impression. When you walk into the room, everyone is laughing a bit too hard at the not-particularly-funny joke of an older woman you’ve never seen before. Do you:

A) Step in with a really funny joke, definitely much better than the one you just heard. Your new colleagues are going to love this!

B) Laugh along with the others, even though it’s not very amusing.

C) Find a tactful moment to introduce yourself to the older woman, who you’ve correctly assumed must be the head of the company.

If you chose A, you seriously need to work on your nunchi. If you chose B, good work, you read the room correctly and picked up the right cues from your new colleagues. If you chose C, congratulations, you’re already on your way to mastering the power of nunchi.

Nunchi is the Korean superpower. Some people even go so far as to say it’s how Korean people can read minds — though there’s nothing supernatural about it. Nunchi is the art of instantly understanding what people are thinking and feeling, in order to improve your relationships in life. Having great nunchi means continuously recalibrating your assumptions based on any new word, gesture or facial expression, so that you are always present and aware. Speed is paramount to nunchi; in fact, if someone is highly skilled at nunchi, Koreans don’t say they have ‘good’ nunchi, they say they have ‘quick’ nunchi.

In the short term, nunchi will save you from social embarrassment – you can’t make a faux pas if you’ve read the room correctly. In the long term, nunchi will make the waters part for you. People will open doors that you never even knew existed. Nunchi will help you live your best life.

There’s an old Korean expression about the power of nunchi: ‘If you have quick nunchi, you can eat shrimp in a monastery.’ Admittedly, this makes no sense until you understand that traditional Korean Buddhist monasteries are strictly vegetarian. In other words, the laws bend to your will.

Everyone can improve their lot by honing their nunchi; you don’t have to be privileged, know the right people or have an impressive academic pedigree. In fact, Koreans refer to nunchi as ‘the advantage of the underdog’ for just those reasons. It’s your secret weapon, even if you’ve got nothing else. As for those who were born with a silver spoon in their mouth, well, there is no faster way to lose your advantages in life than a lack of nunchi.

As Koreans say, ‘Half of public life is about nunchi.’ A well-honed and quick nunchi can help you choose the right partner in life or business, it can help you shine at work, it can protect you against those who mean you harm, and it can even reduce social anxiety. It can make people take your side even when they aren’t sure why. Conversely, a lack of nunchi can make people dislike you in a way that is as mysterious to them as it is to you.

So if you’re thinking, ‘Oh dear, not another Eastern fad – I’ve already thrown away half my clothes thanks to Marie Kondo,’ first of all, it’s not a fad. Koreans have been using nunchi to evade or overcome more than 5,000 years’ worth of slings and arrows.

You need only look to recent Korean history to see nunchi at work: the country went from Third World to First World in just half a century. Only seventy years ago, after the Korean War, South Korea was one of the world’s poorest nations — poorer than most of sub-Saharan Africa. To make matters worse, it had no natural resources at all: not a drop of oil, not an ounce of copper. By the twenty-first century, South Korea had become one of the richest, coolest and most technologically advanced nations on the planet.

It now manufactures most of the world’s semiconductors and smartphones. It is the only member nation of the Organisation for Economic Cooperation and Development (OECD) that started out as a borrower of money and then became a lender of money.

Sure, some of that was down to the usual luck, hard work, and a little help from their friends, but if it were that simple, any number of other developing nations could have achieved exactly the same thing. Yet none did. The Korean economic miracle has always been based on nunchi: the ability to ‘eye-measure’ other nations’ rapidly evolving needs, to manufacture export products that evolve as quickly as those needs, and to recalibrate plans based on the universe’s only constant – change.

Nunchi is woven throughout all aspects of Korean society. Korean parents teach their children about the importance of nunchi from a very young age, on a par with lessons such as ‘Look both ways before crossing the street’ and ‘Don’t hit your sister.’ ‘Why do you have no nunchi?!’ is a common parental chastisement.

Nunchi is a part of daily life in Korea, because Korean culture is what is known as ‘high context’, which is to say that a great deal of communication is based not on words, but on the overall context, which has countless factors: body language, facial expressions, tradition, who else is present, and even silence. In Korea, what is not being said is every bit as important as the words that are spoken, and a person who pays attention merely to the words is getting just half the story. But this in no way means that you need nunchi only in Korea. Even in the West, life is full of high-context scenarios requiring your nunchi – even if you didn’t know such a word existed.

Excerpted with permission from the publishers, Hutchinson/Penguin Random House