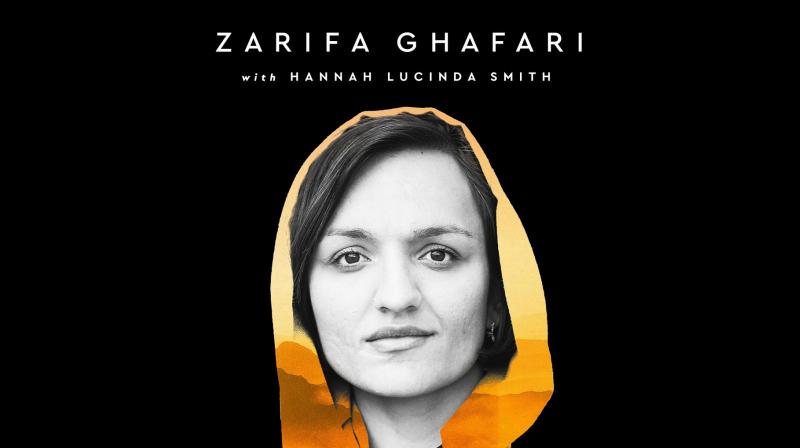 Finally having got asylum in Germany, with her mother, Mohammadi and her own siblings, this extraordinary woman has managed to render her astonishing story on paper for people around the world who wish to look behind the Taliban’s Iron Curtain. — By Arrangement

The memoir of Zarifa Ghafari, Afghanistan’s youngest female mayor, written with her friend, the Times’ correspondent Hannah Lucinda Smith, is not for the faint-hearted. It is fair to say, right at the outset, that for the reader, the value of this book is journalistic and scholarly rather than literary. However, Ghafari’s dramatic life story lends itself very well into film, and hence we have In Her Hands (2022), the Netflix documentary.

The contents of the book are both heartbreaking and disturbing.

When the Taliban took over Kabul on August 15, 2021, President Ashraf Ghani was the first to abdicate his post. In contrast, three days on, Ghafari, a survivor of three attempts on her life by the Taliban the last of which killed her father, in November 2020, was still in office, albeit fearfully, waiting with her partner, Bashir Mohammadi, to face execution.

Finally having got asylum in Germany, with her mother, Mohammadi and her own siblings, this extraordinary woman has managed to render her astonishing story on paper for people around the world who wish to look behind the Taliban’s Iron Curtain. More inspiringly, this valiant idealist has since returned to Kabul to continue her grassroots work on human rights.

For readers at a great remove from the soul-killing realities of Afghan life today, the experience of reading Zarifa’s memoir may feel like an adventure. Zarifa Ghafari was born in Afghanistan in 1994 (p. 7) when the country was in the middle of a civil war. She spent her earliest years under the Taliban’s first regime, but came of age after 2001 as a “supposed democratic government was being propped by Western armies”.

Zarifa’s childhood memories consist of watching videos with the volume turned off and curtains drawn, so that neither the light nor the sound could reach the Taliban patrolling the street. This scenario is repeated when she started school at age four. Her school was in the basement of a nearby apartment. Together, the group of girls studied in the dark, with the lamps permanently turned off. If there were footsteps outside the door, the teacher would shush them, and the girls would hide their books under the rug.

Her father Abdul Wasi Ghafari, was an army general. Because of her father’s new posting, the family moved to Paktia, where nine-year-old Ghafari started going to a regular school. Soon, she was selected alongside several other students to attend a conference on children’s rights. The spunky girl put out a wish list before the President (Hamid Karzai), an event that was broadcast live on TV. It was Ghafari’s first brush with the spotlight. She was just 11.

In 2005, while walking to school, Ghafari was injured in an attack by a suicide bomber, landing her in the hospital with severe injuries. Forbidden by her father to attend school as it was risky, she would proceed to sneak there while her father was away at work. But again, in September 2006, a suicide attack found her while going to school. This time, her skull got fractured in three places with shrapnel gouging out bits of her body.

But Ghafari was not to be deterred. Presently, she started working as a teacher in a girls’ school, giving out English and Mathematics lessons. At the same time, she enrolled in English classes herself, in order to pursue her childhood dream of becoming a diplomat.

At 16, Ghafari was offered a scholarship by the Indian government. Against much family opposition, Ghafari went on to pursue her bachelors and masters at Panjab University in Chandigarh. After returning to Kabul, she met Mohammadi, who not just became her business partner, but also her fiancé. The assassination of Farkhunda Malikzada took place around this time, and it was then that her egalitarianism crystallised into feminism.

Mohammadi and Ghafari set up a radio station in Maidan Shahr. It was called Peghla FM. Through it, she hoped to reach out to women, understand their specific situations, and mobilise change. Ghafari travelled from Kabul to Maidan Shahr each day through Taliban territory. The radio station boomed, its audience grew and calls poured in.

In March 2018, the central government announced that it was holding examinations to appoint mayors to 11 provinces. Ghafari applied for the job from Wardak at Bashir’s insistence. After she got selected, although she had to fend off a mob attack, was put on a waitlist for nine months and was greeted with pushback at every stage including gossip about her clothes, with even the governor refusing to take her calls, in the end of it all, there was no looking back.

From April 2019 to August 2021, Ghafari was mayor of Maidan Shahr, capital of Wardak province. As mayor, she wiped out corruption, eliminated bribes and ensured that the licence system was adhered to. Under her, the employees actually delivered.

After reading the book, I realised that my eyes were moist with tears.

Zarifa: A Woman's Battle In A Man's World