A considerable amount of the work is also finessed by her own networks of family and friends as well as professional contacts built up over the years. 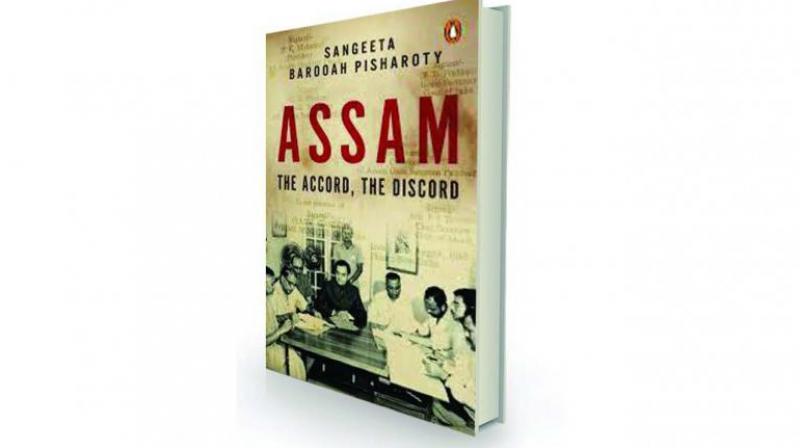 Assam: The Accord and the Discord by Sangeeta Barooah Pisharoty Penguin, Rs 599.

This new book on Assam is perfectly timed. Without beating about the bush, or indulging in the usual pleasantries and sweeping generalisations, Sangeeta Barooah Pisharoty goes to the core of the major issues before her home state. This is an ambitious book.

While the timing could not have been better as far as trying to understand the controversial and very messy National Register of Citizens, the ‘final list’ of August 31 has put mud on everyone’s face. Some 19 lakh people are ‘out’ of the system but that figure is several times less than the expected number which the Bharatiya Janata Party, its leaders at the national and state levels, the Asom Gana Parishad and the perpetual agitators and students from the All Assam Students Union (AASU), assiduously sought to promote over decades.

Now the parties are stuck with a list they do not accept. With going back to the Supreme Court an option, the question is whether a movement that has fought on this issue for 40 years, caused much turmoil and deeply fissured society can continue without end.  Who does it benefit and who gains. Where, for example, are all those who fought for these issues in the 1980s and 1990s?  One is the state’s chief minister, others are ministers, a few are members of the Opposition; Samujjal Bhattacharyya, once general secretary of AASU, continues to be its seemingly perpetual adviser. I have known him and the chief minister from their student days in the 1990s.

The Assam movement, which lies at the heart of what is playing out in Assam today with the NRC process and problems, is researched extensively and with depth and clarity in this book. What I really value about it is the extensive footslogging and groundbreaking work the author has done based on her long stints with The Hindu and now with The Wire. A considerable amount of the work is also finessed by her own networks of family and friends as well as professional contacts built up over the years.

This is what gives the book not just its strength but a narrative punch which tosses out surprises. We are all aware of the origins of the Assam movement which was the 1979 by-election caused by the death of Hiralal Patwari, Member of Parliament. There were a spate of objections to the voters list in that election and tens of thousands of objections were filed, much like those to the first NRC.

What comes out is stark: the official system under Hiranya Bhattacharyya, then IGP, essentially suborned the structures of state to encourage and enable students and agitators to toss out objections at will. This triggered the first steps of the movement, one which swept Assam, toppled state governments, forced two Prime Ministers to negotiate with agitators, and caused extensive rioting in 1983, leading to the deaths of thousands. I well remember those set of events because I reported extensively from Nellie and Goreswar, Gohpur and Chaygaon and many other places. Those who have not lived through those times cannot imagine what they were like — roads dug out, bridges broken or burned, the police unable to cope, villagers brutalised and living under a pall of fear and suspicion.

That is why the author and I are on the same page when we are deeply concerned about well-meaning activists who visit Assam briefly, hear a few viewpoints, jump to conclusions and launch campaigns since they are big names in the civil society movement but without understanding the history or possible ramifications. When the NRC results came out and there were far fewer Muslims excluded than Hindus, it was an embarrassing situation for all.

The author flags issues in her writing on the Ulfa and the Bodo situations, as well as on the Citizenship Amendment Bill, which policymakers and implementers need to understand. There is the real fear of being overrun by small groups in Meghalaya, Nagaland and Mizoram when it comes to legitimising Hindus from Bangladesh who could become a major legal segment of the population in these states and be seen by ‘locals’ as a demographic threat. That could open a Pandora’s Box the Centre is not truly prepared for.

There’s also a lesson for the metro and local media in the book, the only criticism of which could perhaps be that it is far too detail-rich on some issues.

Laudably, the author has given credit to Dr Nirode Barooah’s pioneering work on Gopinath Bardoloi. Dr Barooah is little recognised for his erudition by many scholars of the region. We need to acknowledge Bardoloi as the builder of modern Assam, the man who prevented it from going to East Pakistan and who, along with Gandhi and the Assam Congress of the time, are the reason why the map of India is what it looks like today.

Migration and demographic change were critical issues in the 1940s before Independence. However, migration from Bangladesh is actually diminishing because its economic growth indicators are better than most parts of the Northeast and several other states!

The question before us is simple: will the narrative change? Will we get on with the lives we need to build and the future we need to shape instead of being forever anchored in the past, playing into the hands of petty bombastic politicians and resisting change?

The writer is international director of the Commonwealth Human Rights Initiative and author of four books on the North-East. These include Strangers of the Mists and, most recently, Strangers no More.