‘DeMo was a Tuqlaki idea’ 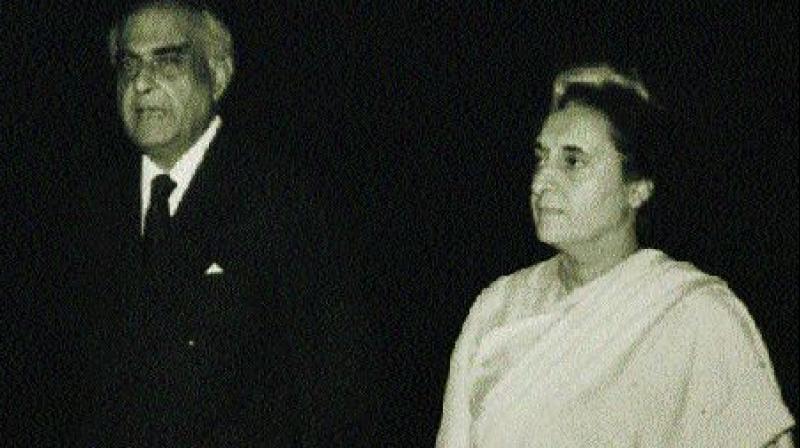 Senior Congress leader, intellectual, author and historian, Jairam Ramesh’s latest book Intertwined Lives: P. N. Haksar and Indira Gandhi – has just hit the stands and is steadily rising in the sale charts. An exceptionally well-researched book, it is yet another unconventional biography from Mr Ramesh, after his last book, Indira Gandhi: A Life in Nature, one of India’s first environmental biographies.

Parmeshwar Narayan Haksar (September 4, 1913-November 25, 1998) was a bureaucrat and diplomat, best known for his six-year stint as the then Prime Minister Indira Gandhi’s principal secretary (1967-73). As her mentor, who had known young Indira since 1930s, Haksar was the chief strategist behind the young and inexperienced Indira Gandhi and responsible for her rise to near absolute power in mid-1970s. Many historians and political analysts consider Haksar as one of the most powerful men ever in India, unimpeachably India’s most influential civil servant, who fell apart from Indira Gandhi owing to differences with her second son, Sanjay Gandhi.

Indira Gandhi, who knew Haksar since her student days in London in late-1930s, plucked him out of his diplomatic career and appointed him secretary in the Prime Minister’s secretariat in May 1967. He emerged as her ideological beacon and moral compass, playing a pivotal role in her much-heralded achievements like nationalisation of banks, abolition of privy purses and princely privileges, the Indo-Soviet Treaty, creation of Bangladesh, rapprochement with Sheikh Abdullah, Simla and New Delhi Agreements with Pakistan, emergence of India as agricultural, space and nuclear power, and lastly the integration of Sikkim into India.

In an interview to Sriram Karri, Jairam Ramesh discusses his latest book and the political scenario in the country. He reveals why he scoffs at the comparisons between Indira Gandhi and Narendra Modi, and exudes confidence that the Congress will be a part of the government that will be formed after the next general elections.

Congratulations on an exceptionally well-researched book; yet another biography, this time of diplomat-bureaucrat P.N. Haksar, yet it is not a straight biography of the man but a story of his life and work in the context of Indira Gandhi. In a way, this is a second book on Indira Gandhi by you. Why this fascination with her?

This is a book on Haksar, who was Indira Gandhi’s alter ego. There is an extraordinary Haksar archive at the Nehru Memorial Museum and Library, which has made this book possible. Without this treasure trove of primary material, I would not have written this book, my fascination, as you put it, with Indira Gandhi notwithstanding. Haksar was the pivotal figure during Indira Gandhi’s prime ministership between May 1967 and January 1972, and his influence continued till March 1977. This was the most tumultuous period in Indian politics and that is one reason why I wanted to write about it through the prism of Haksar and, not so much Indira Gandhi.

You have been constantly trying to cast a new narrative on Emergency, putting the blame on Sanjay Gandhi and projecting Indira Gandhi as a mother-victim? If this is true, what explains her becoming so weak after having been Durga in 1971?
The Emergency was a colossal error of judgment and decision. I have not shied away from saying so in both my books. I have sought to understand the political and economic backdrop to the Emergency without, in any way, wanting to defend it. The immediate provocation was the Allahabad High Court verdict of June 12, 1975, wherein Indira Gandhi was held guilty on two relatively trivial offences on technical grounds. But a crisis had been brewing for two years, as Haksar also explained, which I have included in the book.

Indira Gandhi and Haksar became friends in 1930s, when she was in London. She had him in mind for many roles that he later played. Did both Indira and PNH know, or had an inkling of, that she would go on to run India in the future?
Obviously not. Indira Gandhi became Prime Minister in January 1966, after the then PM Lal Bahadur Shastri died unexpectedly in Tashkent. She was the original “accidental Prime Minister” in that sense. Haksar was in the last five years of his diplomatic career by the time she became the Prime Minister.

If Haksar was to be Indira Gandhi’s ideology-lighthouse of sorts, who helped her convert her fight with the Congress syndicate from one of personalities to ideology, who was his equivalent to Mrs Sonia Gandhi during the 2004-14 era? And who might it be for Rahul Gandhi?
Indira Gandhi was Indira Gandhi and Haksar was Haksar. Their relationship was unique which embraced not only Nehru but Feroze Gandhi as well. Any analogy would be invidious. But as far as I know, if Mrs Sonia Gandhi had perhaps one conscience keeper during 2004-14, it would undoubtedly have been Dr Manmohan Singh

Was Sanjay’s Maruti the first real scam in India in the sense of crony capitalism? Of harnessing political high office to make laws convenient to create economic empires for personal gains? Was he the real pioneer in that sense for this problem that still plagues us?
I do believe that Sanjay Gandhi’s Maruti project was extremely ill-advised from every point of view. Today’s Maruti is a creation of Dr Suzuki and V. Krishnamurthy with, of course, Indira Gandhi’s full support during 1981-84 and subsequently that of Rajiv Gandhi. It has nothing to do with Sanjay Gandhi’s aborted and ill-fated enterprise. This enterprise was the subject of a detailed judicial inquiry that submitted its report in mid-1978, which I have mentioned in my book.

Do you underplay the rift between Indira Gandhi and Haksar in various aspects, from his difference of opinion with her on accepting Bharat Ratna, or the Maruti project, etc.?
Not at all. But I do believe that the rift between Haksar and Sanjay Gandhi went back to 1965, during the latter’s Rolls Royce days, which, in turn, created a rift between Haksar and Indira Gandhi. Haksar saw the writing on the wall, and he voluntarily, and gracefully, exited her innermost orbit in January 1973. This was the one difference of opinion that could not be bridged.

You stress a lot on his role as a former diplomat in foreign affairs but less on the Home front? Was Haksar not significant or did she take her advice on that front from someone else? For example, on say handling the Telangana agitation of 1969?
No, he was involved in domestic affairs too but I did not find too many papers in the archives on, say, Telangana. What I could locate I have used. He was heavily involved with J&K, for instance, as well as Sikkim.

You have pooh-poohed people drawing parallels between Indira Gandhi and Narendra Modi as strong leaders? How was bank nationalisation different from demonetisation in that sense?
There is simply no comparison. The nationalisation of banks had a socio-economic imperative, which had been under discussion for at least three years. Demonetisation was a Tughlakian decision taken without adequate consultation, discussion or preparation.

Congress leader Rahul Gandhi is opposing “one nation, one polls” idea? Are you afraid that a presidential format of campaign would lead to a bad performance?
“One nation, one polls” idea has been opposed by many political parties. It is deeply anti-democratic and will significantly curtail the accountability of the executive. I hope you know where this idea comes from. It derives its inspiration from Nazi Germany—Ein Volk, Ein Culture, Ein Fuhrer (one people, one culture, one supreme leader).

How does Congress hope to deal with Mr Modi in 2019? What are your chances and would you accept a third front PM and give support from outside in case such a scenario arises?
In 2004, we burst the India Shining balloon much to the surprise of many and in 2019 (or earlier), we will puncture the Acche Din bombast as well. The question of who will be Prime Minister is less important at this stage. What is more important is for like-minded parties to come together with a positive narrative to save democracy and to address the concerns of all the sections of society, particularly farmers, labour, youth, dalits, women, minorities and adivasis.

Do you feel there may yet another disruptive (in your words, Tuqlakistani) move on a raw emotive issue that may change the narrative substantially before the elections: Kashmir, or Ram Temple, or massive direct deposits to Jan Dhan accounts?
The only strategy the BJP knows is that of communal polarisation and fanning hyper-nationalism. I would not put anything past the Modi-Shah duo to retain power.

Would you ever attempt a book on Sonia Gandhi anytime?
That is an interesting thought and she certainly deserves an informed and objective biography based on solid research. I may not be the best person, however, to write one.

Sriram Karri is the author of the bestselling MAN
Asian Literary prize longlisted novel, Autobiography of a Mad Nation, and the non-fiction, The Spiritual Supermarket