The book starts with Heffley, who has seen a movie as a little kid about a man whose whole life is secretly filmed for a TV show 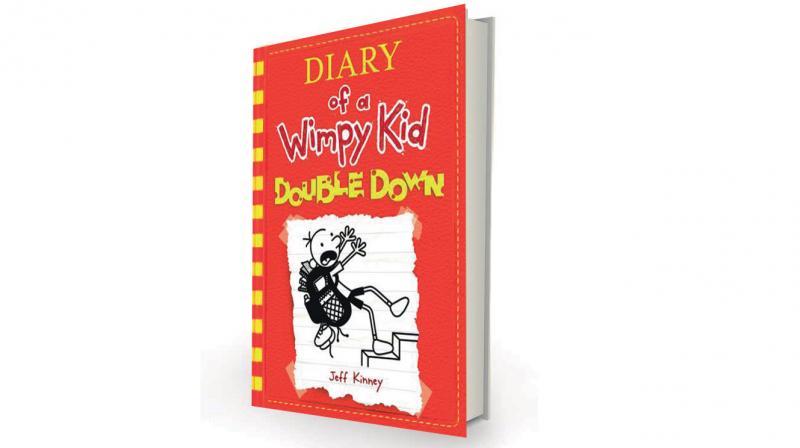 Diary of a Wimpy Kid: Double Down by Jeff Kinney Puffin, Rs 399

Jeff Kinney’s latest book Diary of a Wimpy Kid: Double Down is a laugh-a-riot just like his previous books. Critics may harp that the plots of his books are wafer thin, but Kinney is laughing not just all the way to the bank, he is also making an entire lot of children laugh along with him. The success of the Wimpy Kid books is a testimony of the fact that Kinney has struck a publishing gold mine, and with each new book he unearths a fresh haul of gold.

Though I’ve left my childhood far behind, I enjoy Kinney’s books, written (in the format of a diary) and illustrated by him, as much as the middle-schoolers who gobble up his books like they are pizzas with their favourite toppings (the main character Gregory Greg Heffley, his elder brother Rodrick, younger brother Manny and Greg’s best friend, Rowley). Heffley, the boy who studies in middle school around whom this series is built, is a complete scaredy cat and his antics make you wish that you had a pal like him, who would make you laugh and laugh, until you could laugh no more.

The book starts with Heffley, who has seen a movie as a little kid about a man whose whole life is secretly filmed for a TV show, making the guy famous all over the world. This thought embeds deep in Heffley’s mind, making him believe that a similar thing was probably happening to him (that his boring life too was a TV show and that he was entertaining a million viewers every day). To amuse people, he decides to do something funny every day and that comes super easy to this crazy boy. Going with the theory of a TV show he comes up with a catchphrase (he believes that every main character has one), Heffley’s catchphrase is “Bite My Biscuits”. He even dreams of putting this on a whole lot of merchandise and raking in the cash.

This middle-schooler has a warped sense of thinking, as well as a wacky sense of humour. Just imagine thinking that everyone around him is a robot and that he is the only human in his family. To prove his theory right, he justifies it with the fact that robots need electricity, no wonder every room in his house has at least three electric outlets. And when he comes across a cache of batteries in a plastic bin in the laundry room, his suspicion is confirmed. Now all that this wacko needs to prove his theory about his family being a bunch of robots, is to short-circuit one of them. But when he tries it on his father, by blasting him with a hosepipe, he comes to the conclusion that either his father is a waterproof robot or a regular human with no sense of humour. And like all the other such silly pranks in his life, this incident too gets him grounded. After this he latches on to the idea that aliens are spying on humans and they are snooping on mankind through houseflies, which are actually small drones the aliens are using to beam images back to their spaceship. Seeing a swarm of flies around dog poop he wonders why the aliens are fascinated with canine excreta. To communicate with the aliens Heffley starts talking to the flies.

Like a typical child, Heffley puts his own spin on everything his mother tells him. When she says that he will always be safe as his grandmother and other relatives who passed away will always be watching out for him from heaven, he gets a panic attack thinking of all the times he hadn’t been on his best behaviour with his grandma. He also decides that when he gets into heaven he would be rather swimming in a giant pool filled with jelly beans or doing loop-the-loops around the clouds, instead of looking after his pesky great-grandchildren, hoping that he gets the power to punish his descendants whenever they do anything wrong.

I like the way Kinney intersperses a whole lot of issues into his books in a subtle manner, by incorporating these problems into his main character’s life, making his books echo with children all over the world facing similar hassles in their lives. When Heffley’s mom wants him to stop playing video ames as they are turning his brain into mush and explore his creative side, or when she wants him to stop watching television so that he can discover a talent he never knew he had, I can visualise both parents and their children nodding in agreement.

One of the funniest incidents of the book is when Heffley wants to get his hands on some candy, he spins a corny tale during his school’s contest called the Balloon Brigade, where the students get a helium balloon which they have to release at the same time. They have been given little cards to write down their names and address, so that when people find the balloons they can send them back, and the child whose balloon travels the furthest gets a giant jar of candy as a reward from the vice-principal. Heffley’s cheesy letter gets him into a sticky situation which will make the readers laugh.

I can completely understand why children go ballistic over Heffley, after all which family do we know has a pig for pet? A pig, who shares his master’s bathtub and maybe even the toothbrush!

Admittedly the books aren’t heavy on plots, but they make up for lack of a strong storyline by being extremely witty, hilariously funny and bringing to light issues that most parents have with their children or the problems siblings face. And to top it, the illustrations by themselves will evoke laugher.

Tags: book review, diary of a wimpy kid: double down