New love blooms, despite the fact that some vested interests used the social media to spread rumours and magnify their religious prejudices. 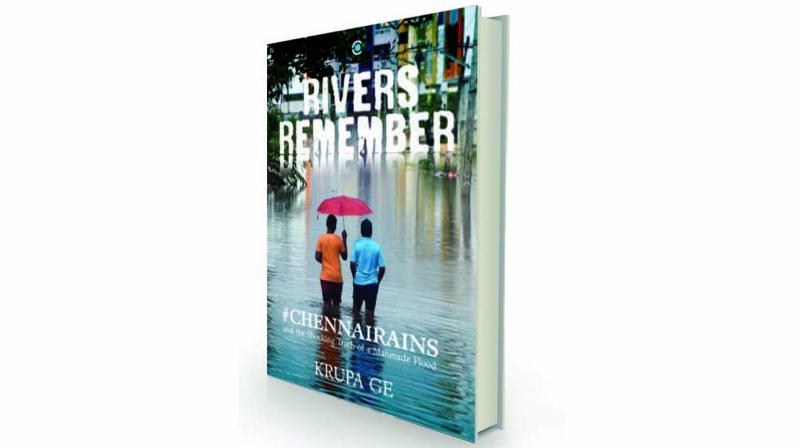 RIVERS REMEMBER - #CHENNAIRAINS and the Shocking Truth of a Manmade Flood, By Krupa Ge Context Rs 499.

If “rivers remember”, as the title of this very evocative account of the different facets of the great Chennai deluge of December 2015 suggests, then they must have a bank of memories. What are these memories, but for the collective actions of people over centuries that make rivers what they are today?

Krupa GE, writer and editor from Chennai, in this work of non-fiction elegantly blends reflections, reportage, slices from history and moving personal accounts of several of those who suffered the tragedy, lost their homes, precious certificates in the original, which defines the “ontology” of modern man, and even greater loss of lives of near and dear ones, not to mention the hundreds of pricey cars that turned into scrap overnight. The flowing narrative thus brings out the big picture, published under more far more sober circumstances, nearly four years later, when Chennai in 2019 has been ironically nicknamed “Drought City”.

It is a vast mosaic of patterns and colours in non-Euclidian space that Krupa has laid bare. It is not limited to just the underlying bonds of humanity that instantly show up when thousands of people are traumatised and the in-built defensiveness of a state establishment that by all accounts bungled in the flood management. What adds starkness to this reality is the author contextualising the present in the backdrop of the “memories” of the three key rivers — the Cooum, Adyar and Kosasthalaiyar rivers — which are part and parcel of the making and unmaking of this once-fascinating Presidency capital of old Madras, now Chennai. Do we really learn from the past and seek a humble course correction or float on the thin metaphysics of flux — this too shall pass? Hence her sardonic epilogue, “The Flood that Wasn’t”. There is an implied warning not to tinker at least now with flood basins of rivers and major water bodies, for when they “remember” their past, men cannot hold out with any amount of technology.

Krupa’s parents are among the suffering souls of this “manmade disaster”, which even the CAG report, tabled in the state Assembly a year after it was submitted to the Tamil Nadu government in the post-Jayalalithaa political scenario, has affirmed, protest notes from the line departments notwithstanding. She says the CAG report minced no words in explaining why this flood happened. “In the 171-page report, ... the most scathing remarks were reserved for the way the Tamil Nadu government had handled the tank that had caused the floods. On December 1, 2015, at 2 pm, when the Chembarambakkam reservoir had 3.377 tmcft of water — which was 0.268 tmcft less than the total capacity of the tank — the amount being released from the tank was increased from 12,000 cusecs to 29,000 cusecs. Again at 5 pm, the discharge was increased to 25,000 cusecs and from 6 pm, to 29,000 cusecs. “The auditors also came to the conclusion that this indiscriminate release of nearly 21,000 cusecs was made to save illegal encroachments in the foreshore area of the reservoir from submerging,” the author writes. Quoting from the CAG report she adds, “This was a serious failure in operation of the reservoir, contributing to the massive disaster.”

The releases by the PWD authorities from Chembarambakkam reservoir, one of the four big lakes — the others being Poondi, Cholavaram and Red Hills — which feed the city’s water needs, could have been staggered. But it turned out to be “a serious failure in the operation of the reservoir, thus contributing to the massive disaster”. The report also pointed out, underscores the author, “that the indiscriminate discharge of water at 29,000 cusecs continuously for 21 hours from six in the evening of December 1 until 3 pm in the afternoon of December 2 into the Adyar river, in addition to the water from upstream tanks and catchment area, caused a huge flow of floodwaters into the river”. Rather than risk breach of the tank, they released the water, but all in one go, leading to the great deluge!

All this in the midst of virtually a “non-existing Emergency Action Plan” as the Tamil Nadu government had not updated its systems and manuals as per the Central Water Commission’s guidelines. “History seems to have repeated itself in Chennai. There is an uncanny similarity between what happened in 1977 in Adyar (river) and what happened in 2015,” the author notes. The liberal building permissions given by Chennai Metropolitan Development Authority have over the years shrunk the city’s water bodies, leading to massive inundation.

Krupa also focuses on the “commercialisation” of the river space, so to say. Construction on the areas adjoining these three rivers has added to Chennai’s vulnerability during such extraordinary precipitations. The fate of “Ennore Creek” with a massive thermal power station coming up in North Chennai and pillars erected along the Buckingham canal for the Chennai Beach to Velacherry mass rail transit system, for instance, have considerably weakened its water draining capacity during floods. In 2015, the underground Metro rail under construction also partly aggravated the flooding, with excess flows from the Adyar river finding a subterranean outlet to heavily inundate parts of Tyenampet and T. Nagar. With help of historical documents, the author shows that the mauling or Chennai’s rivers is largely a colonial exploit, one begun by the British at Fort St George.

Alongside these, what makes Krupa’s narrative cathartic and evocative are the human voices that bring out the compassionate side of men and organisations in moments of crisis, reinforcing our faith in humanity. Chitra, a pregnant woman of Urappakkam, is saved along with 800-odd people by “seven boatmen willing to brave the waters” led by Mohammed Yunus. Chitra makes it to a hospital in suburban Perungalathur and delivers a baby girl. She “named her Yunus”. Does caste or religion matter in such moments?

The Chennai floods was thus also an unwitting opportunity to lay manifest man’s essentially secular ethos and innate altruism as evidenced in the amazing networking of NGOs, like OfERR, formed by the Sri Lankan Tamil leader, Chandrahasan, or actor Surya’s Agaram Foundation.

New love blooms, despite the fact that some vested interests used the social media to spread rumours and magnify their religious prejudices. There are incredible stories: how patients were saved in one hospital, but were not so lucky in another as the floodwaters rose, Krupa’s is perhaps the first work on the Chennai deluge that imparts a coherent understanding of the many-sided chaos it unleashed.