Bose floats the theory that Pataudi’s mother wrote to Prime Minister Nehru that her son was from the minority community and hence denied captaincy. 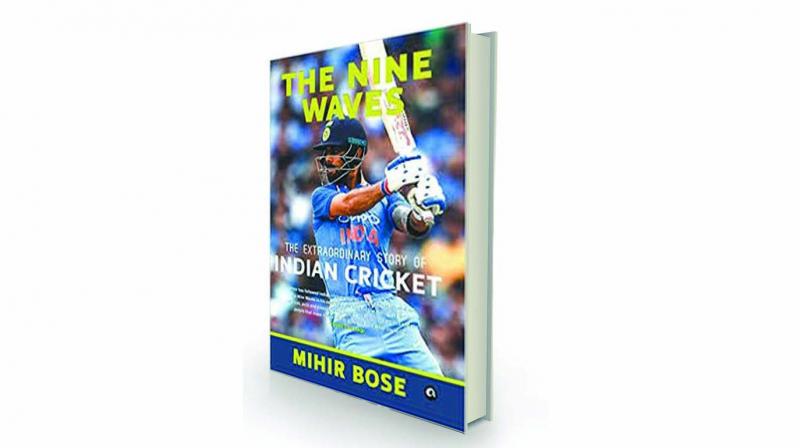 On July 10, millions of Indian cricket fans watching the World Cup semifinal on TV were hoping that the redoubtable former India captain, Mahendra Singh Dhoni (a veteran of 350 one day internationals), would help the team to another swashbuckling victory. But attempting a double, Dhoni got run out by Martin Guptill’s direct hit. Now Kiwi skipper Kane Williamson hopes that Indian fans will support his team. In terms of passionate supporters, financial clout of the Board of Control for Cricket in India (BCCI) and the prowess of the national team, India is a behemoth in world cricket. It was not always so. When Kapil Dev’s team won the 1983 World Cup in England, they were rank outsiders. How did this transformation take place?

Read all about it in The Nine Waves: The Extraordinary Story of Indian Cricket released just before the start of the 12th World Cup. The author cites how the passion for the game increased in every decade. The first wave starts when India played their first official Test match at Lords in June 1932 and the ninth wave, as he terms it, continues in the ongoing Virat Kohli era. That the author not only depicts sporting milestones and cricket results but also situates each wave within the political and social context of India in that time period is the highlight of this book.

For instance, what are the ramifications of the successful T-20 league, the IPL? The rise of Hardik Pandya reflects the changing mindset of lower middle class India. In his youth his family struggled to afford even one meal a day but realising his son’s potential, his father shifted from Surat to Baroda so that he could train in Kiran More’s academy. Earlier Indian parents did not see cricket as a career option for their children. There were also no academies to groom talent. But Pandya, who failed to clear the ninth standard but still speaks Hindi and English fluently, is a reflection of how cricket has penetrated India.

There are many more such interesting social insights. And there is history as well. In the second wave in the 1950s, no Tests were played in India in the winter of 1953-54, 1954-55 or 1957-58 due to a shortage of foreign exchange. There was also insufficient food production and India relied on American surplus wheat given free, known as PL-480 food (the numbers refer to a law passed by the US Congress).

The first signs of Indian cricket as a tour de force came during the tour of West Indies in 1953, in the persons of talented batsmen Polly Umrigar and Madhav Apte and the wily leg-spinner, Subhas Gupte. India lost the series 0-1 but Umrigar topped the batting averages with a century in the first Test and scoring 560 runs at an average of 62.22.

The emergence of Gupte also signaled change. Gupte was not nurtured by princely families but was a product of the Shivaji Park Gymkhana, a club that in the 1980s even produced the great Sachin Tendulkar. The 1953 tour brought the Indian community together for the first time in these islands and they attended matches in large numbers. A Trinidadian woman of Indian descent was enchanted in seeing Gupte bowl and a few years later they got married and settled in Port of Spain.

The sectarianism and feudalism that beset Indian cricket in the 1930s is aptly described by the incident in the 1936 tour to England involving Vijay Merchant and Musthaq Ali. The captain was the Maharajkumar of Vizianagram or Vizzy, as he was known to all. He had become captain because of his royal lineage and his machinations. During the tour he got upset about criticism of his cricketing abilities and captaincy from Merchant, India’s accomplished opening batsman. Vizzy used the communal card. He coaxed the dashing opener Syed Mushtaq Ali, who had been run out in the first innings of the Manchester Test to do the same to Merchant in the second. Mushtaq, sensing Vizzy’s motives, confided in Merchant. The two decided that they would ensure against either getting run out. As it happened, they put on 203 runs for the first wicket, a record which stood till 1964.

Packed with statistics, rare photographs and anecdotes, the book has something for everybody, the fan and the connoisseur. Describing England’s successful tour of India in the winter of 1976 (England won the five Test series 3-1), Bose writes about how their skipper Tony Greig outwitted India’s captain Bishen Bedi. “I covered the series for the London Broadcasting Corporation and at the end of it called Greig the Clive of cricket, the man who had come with nothing and walked away with the loot while Bedi looked like one of the forlorn princes hoodwinked by Clive.” There is also humour. Bapu Nadkarni, lanky left arm spinner from Mumbai, bowled a nagging accurate length but barely turned the ball. Vijay Manjrekar once joked in the dressing room that when Nadkarni turns the ball it will be declared a national holiday. There is also Lala Amarnath’s repartee to Somerset’s batsman Harold Gimlett. In a match at Taunton, Amarnath had tied down Gimlett with an accurate spell of bowling during the tour of England in 1946. An exasperated Gimlett said, “Don’t you ever bowl a half volley.” With a straight face Amarnath replied, “Oh yes, I bowled one in 1940.”

The author has gone on to describe how India became a world-beater team (in 2017 it was ranked the number one team in both Tests and one dayers and second in T-20 internationals) under the current captain, whom the world calls King Kohli.  Interestingly, he has a nickname for every captain: Kapil Dev is a “revolutionary”, M.S. Dhoni a “Teflon Man” and Sachin Tendulkar is “India’s cricketing Yudhishthira”. There are comparisons, of course, like Kapil Dev vs Sunil Gavaskar, Vijay Hazare vs Vijay Merchant. But the analysis is done in a neutral vein.

The flow of the text is what keeps the reader engaged. And there are interesting tidbits. When Virender Sehwag was dropped from the Indian team in 2013, Bose writes, “For Dhoni this was no bad thing, for Sehwag had played the role Borde had played in the Pataudi era, the senior established man denied his chance to lead India by a younger interloper in the shape of Dhoni. Now he (Sehwag) was gone.” Borde had apparently been told by one of the selection committee members that for the Test series against England in 1963-64 he would be captain.  The decision was suddenly changed. Bose floats the theory that Pataudi’s mother wrote to Prime Minister Nehru that her son was from the minority community and hence denied captaincy. It seemed the Prime Minister intervened to ensure that Pataudi became captain. Incidentally, Borde was a Christian. As Bose writes, “Pataudi being like Nehru educated at an English public school and Oxbridge India’s first Prime Minister felt a bond with Pataudi.”

Bose has his take, too, on the new Indian fast bowling phenomenon, now a little over 12 years old. In preparation for the 2018 series against South Africa, Kohli asked the Kolkata groundsmen to prepare a fast wicket. For the first time in 262 home Tests, no Indian spinner took a wicket and all the 17 wickets were captured by Umesh Yadav, Mohammed Shami and Bhuvneshwar Kumar. To make the reader realise how big this change is, Bose mentions a conversation he had with Kapil Dev in 2014. Dev had said, “The fast bowler is a worker. The batsman is an officer sitting in an AC room and talking. So the mindset in India is do you want to be an officer or do you want to be a worker.”  The modern generation Indian cricketer gets better nutrition, scientific training and is willing to work hard as the financial rewards are huge, hence so many fast bowlers are being produced.

The author, who has witnessed nearly five decades of cricket, describes seminal moments in India’s cricket history such as India’s first win in England in 1971, Kapil Dev lifting the World Cup at Lord’s in 1983, Tendulkar’s first Test century as a teenager in 1990, Sunil Gavaskar scoring his 30th test century, and the 2011 World Cup in India where M.S. Dhoni emulated Kapil Dev and became a World Cup-winning captain. He does not leave out the Supreme Court’s role, the Lodha Committee report and his reflections on India’s tour of England in 2018.

The writer is a sports journalist, columnist and commentator