The case was heard by a high court judge, Sir Lawrence Byrne, with his wife Lady Dorothy Byrne sitting beside him, permitted in those days. 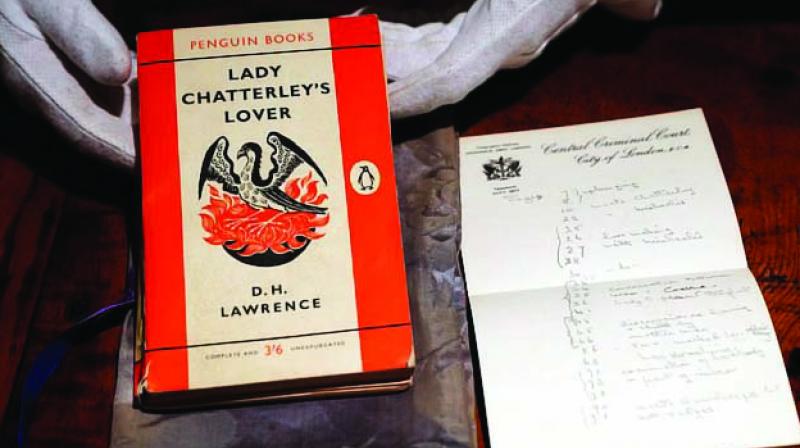 D.H. Lawrence’s celebrated novel Lady Chatterley’s Lover about forbidden love between an aristocratic young married woman and her working-class gamekeeper is making news again and some may argue again for the wrong reasons. Published privately by Lawrence in Italy in 1928 and then reissued in France and Spain in 1929, the unexpurgated novel had been banned both in the UK and the US. In 1960, after a change in obscenity laws in England, Penguin Books decided to risk it and decided to publish it in paperback, hoping their “orange and white” simple cover would escape official scrutiny. It didn’t and was banned on grounds of obscenity. Penguin appealed against the ban and the stage was set for one of the more famous cases in publishing history, one that would become a test case for all such future cases.

The case was heard by a high court judge, Sir Lawrence Byrne, with his wife Lady Dorothy Byrne sitting beside him, permitted in those days. But Dorothy’s role in the famous trial was much more. It was she who had read the book, annotated it and underlined the sexually explicit parts (by standards prevailing then) for the benefit of her husband. She even went further to sew a “cover concealing damask bag” to hide the copy from prying eyes, a point to be noted by those who read “risque” novels, but alas, who do we see reading these days? In her annotation, Dorothy had even written out separate passages, marking them as “more love-making”, “coarse”, etc. Her meticulous notes would have made for a great classroom text.

But the case was now to decide whether the book should even exist. At the outset, Sir Lawrence offered the prosecution a chance to add more women jurors but the prosecution stuck with the jury’s composition of nine men and three women. One is not sure of how many people attending the crowded courtroom had read the book in question, even among the jury. The history of publishing has shown judges banning books without reading them. Also, copies of the banned book were hard to come by.

At the trial, the opening remarks of the lead prosecutor Mervyn Griffith-Jones to the jury were not only dramatic but also assumed that they had all read the book and were greatly alarmed as righteous citizens. “Would you approve of your young sons, young daughters, because girls can read as well as boys (what a confession) reading this book?” “Is it a book you would leave lying around in your own house? Is it a book that you would wish your wife or your servants to read?” A lot of drama, but all pure hyperbole. Jones was to be commended for assuming that servants could read except that servants had almost disappeared from English society at the time. Moreover, his remarks seemed to be addressed exclusively to the male members of the jury, forgetting the three women members who had an equal vote and also overlooking the fact that at least one woman, Dorothy Byrne, had read the book from cover to cover. Surely, he would have known and would have approved, for her annotation might have influenced Lord Byrne.

The writer Jan Morris covered the case for the Times. Morris recorded that even if some of the jury had not read the book before the trial, each of them had now been given copies of the Penguin edition. The defence had arrayed a formidable list of witnesses, including the novelist E.M. Forster, who had met Lawrence and confessed his admiration for him. Among others, there were two academics like Richard Hoggart of Leicester University and Mrs Joan Bennett, a Fellow of Girton, who stated that she would have no hesitation in teaching the novel to a mixed class of students.

The trial dragged on for five days, including a summing up by Lord Byrne, where it seemed he was sending signals to the jury that they needed to look at the book as going out into the public domain and not as a text being studied in the “ivory-tower” of an university. In fact the judge’s remarks did make the Penguin hearts present in the audience skip a beat. Among them was the Penguin chief, Sir Allen Lane, whose quest for a paperback as plentiful and as cheap as a pack of 10 cigarettes had caused the paperback revolution.

But they need not have worried. The jury came back in three hours with an unanimous verdict of “not guilty”. This time Sir Allen celebrated. Penguin’s print-run of 200,000 copies sold out in a day. Penguin was to sell two million copies within a span of two years, making it an all time bestseller. What would have been Lord Bryne’s private opinion of the book will perhaps never be known but he perhaps felt that that the prosecution’s case had merits, for in his final order, he refused to order costs to Penguin, and Penguin had engaged expensive counsel.

We will now concern ourselves with what happened to Lord Byrne’s copy of Lady Chatterley’s Lover so meticulously read and marked up by Dorothy Byrne and equally carefully hidden from public view by the damask bag. The copy, along with the bag, eventually found its way to the collection of a reclusive and eccentric billionaire Stanley Seeger and his partner Christopher Cone. Since Seeger’s death in 2011, Sotheby’s has been selling a number of Seeger’s collections including Al Capone’s cocktail shaker and Marilyn Monroe’s picnic basket. And last year, Lady Chatterley’s Lover came under the hammer along with the bag. It was not in great condition. The catalogue noted “the spine is chipped, the pages are starting to come loose, and an old paper clip has left its rust mark on the cover. It’s also full of pencil underlinings, with a separate note giving page references for the rude bits”. The book was sold to an overseas buyer who remains anonymous for the sum of £56,250. This sale has now caused a storm in England equivalent to that of Brexit.

A committee of experts met under the chairmanship of Sir Hayden Philips and concluded that the copy was a “witness” to one of the most important criminal cases in the 20th century. It turned out that Philips, then aged 17, had been studying D.H. Lawrence for his A level exams. He felt “more than sad”, a “misfortune, if such an important witness was to leave our shores”. Accordingly, Michael Ellis, Britain’s arts minister, has placed a ban on the export of the book. In Ellis’ words, “the trial of Lady Chatterley’s Lover captured public attention in 1960. It was a watershed moment in our cultural history when Victorian ideals were overtaken by a more modern attitude. I hope a buyer can be found to keep this important part of our nation’s history in the UK”. Admirable sentiments these and we are sure some philanthropic soul would put up the money for Queen and Country before August when the ban runs out.

We also wish such sentiments had played not so long ago when England allowed its most precious literary artifact — copies of Shakespeare’s First Folio to go overseas. Only 235 copies of the original print-run of 750 copies are known to have survived. Five are in the British Museum, one recently discovered in Scotland and one in the Bodleian Library at Oxford, retained under extraordinary circumstances, and 82 copies are overseas. The story of the millionaire Henry Folger collecting 82 copies of the First Folio and housing them in the Folger Shakespeare Library in Washington D.C. is a fascinating one and for another time.