This science fiction series is addictive and makes for a fun watch. 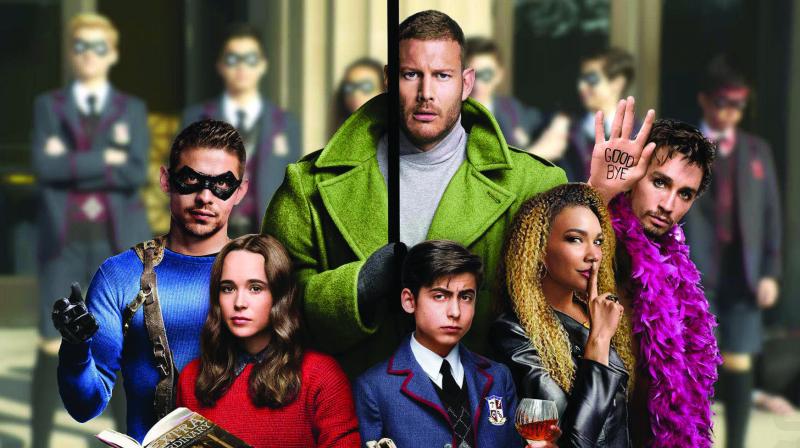 Seven children born on this day are adopted by the mysterious billionaire Sir Reginald Hargreeves to form a group of gifted superheroes called the The Umbrella Academy.

It seemed like just another day on October 1, 1989. But in reality, there was nothing normal about that day. Women across the world gave birth without having any signs of pregnancy before going into labour. Seven children born on this day are adopted by the mysterious billionaire Sir Reginald Hargreeves to form a group of gifted superheroes called the The Umbrella Academy.

Grace, a humanoid robot is put in charge of their care while the children lovingly call her “Mother”. But what’s weird is the Sir Hargreeves does not name them— he just calls them numbers 1, 2 , 3, 4, 5, 6, and 7.

Some few years later, we learn that these adopted siblings are estranged and meet only when Sir Hargreeves passes away. Pogo a chimp that can talk and also Mr Hargreeves’s personal assistant welcomes each of the siblings as they arrive for the funeral. In the present day, Luther (1) is an astronaut, Diego (2) is a vigilante, Allison (3) is a celebrity, Klaus (4) is a seance who is the only one who can contact Ben (6), The Boy (5) is a time shifter and lastly Vanya (7) who show no signs of having any powers.

Vanya has to live under the shadows of her powerful sibling. While they went out to fight against crime, she was kept at home by Sir Hargreeves. Through out the show, you can’t really understand what happened to Ben and why he was killed and why The Boy is missing from the picture. On the day of the funeral, The Boy time jumps from the future and lands in the present appearing to look like a kid still. The one thing that works for this series is the way concepts like superpowers and time travel appear cool and relatable.

The Boy brings with him the news of an apocalypse and he wants his siblings to help him stop it from destroying the world. Hot on his chase are assassins  Hazel and Cha-Cha who are sent by The Handler played by Kate Walsh of the Grey’s Anatomy fame to kill The Boy.

The supposedly powerless Vanya starts to learn about her powers, why her adopted father hid them and the damage her power can do. Vanya is in fact the most powerful of her siblings as she can use sound waves into a destructive force. Towards the end of the season, Vanya’s powers is what cause the apocalypse. The siblings join to together stop the destruction while also saving their youngest sister.

The season ends with a number of questions. What exactly happened to Ben? Do the siblings find a solution to stopping Vanya? These answers they say will be answered in the next season which we will have to wait for, for a long time. But like how a good book is irresistible, the same way this 10 episode series is worthy of a binge watching session.