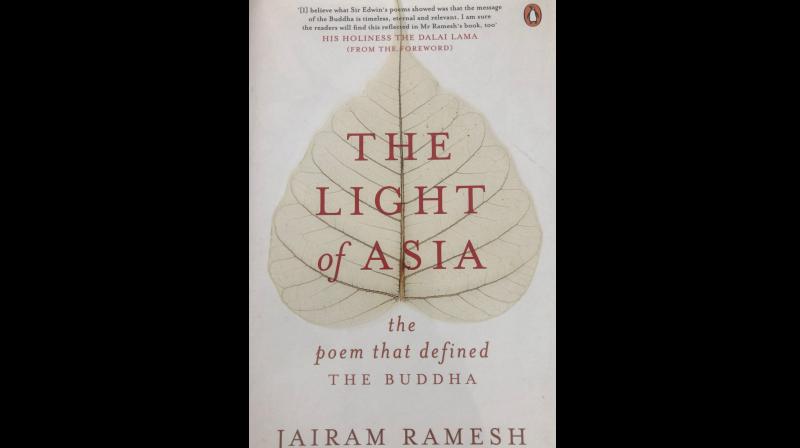 The poem, ‘Light of Asia’, by Edwn Arnold has a curious life and journey of its own.

Hyderabad: When a politician loses, the author within awakens. The aphorism seems tailor-made for Jairam Ramesh, who had a couple of books before 2004, a single anthology during the UPA era between 2004 and 2014, but has eight books after Narendra Modi took office.

Staggering output, marked by an exceptional range of themes and topics added to his oeuvre, his latest and unimpeachably his most ambitious work already being acknowledged a masterpiece, Jairam acknowledges the irony. “The author in me will be grateful to Modi. He gave me the time to reflect on ideas, subjects and themes I always wanted to but being in power meant not being able to find time for. These books, one after the other, dealt with subjects I had a special fascination for.”

Yet, none of his books were only about dabbling with the subjects and penning reflections. The biography of Indira Gandhi was a unique perspective of her life and love for the environmental. His work on P. N. Hanskar, delved deeply into the quintessential top-bureaucrat who held more influence and sway that perhaps any other, and easily a benchmark for any future work to analyse a bureaucrat in retrospect.

The work on V. K. Krishna Menon, who Jairam says was both controversial and consequential, not only merely rekindled interest in a life of the man, but unleashed strong emotive response from readers. Given the manufactured, fashionable anger of today against the first prime minister, and the animosity and fear of China, the work on Menon went on to become a hit.

It is here, surprisingly, Jairam Ramesh abandons his comfort zone. A bit like Buddha.

In selecting a work on a subject not contemporary, a perspective sui generis – he was not writing about Buddha but undertaking to do a Boswell, not on a person but a poem. The poem itself was remarkably powerful, and influential; and in telling the tale of its conception, its creation, its impact and influence, Ramesh found his highest inner calling sufficiently inflamed.

A few days after the pandemic had taken stranglehold of our lives and the Prime Minister announced a nation-wide lockdown (March 24, 2020), I started my research, he narrates.

It took him almost six months of intensive research. Post the research phase, he started accessing online archives across the world, digitally. Across specific resources in the UK, Russia, the USA, and Germany, even the Vatican library. He lucubrated for three months, and after keying in 120,000 words, had achieved the first draft.

The author in him is batting with the strike rate of Kohli, I quip. He laughs his slightly immodest acknowledgement. “From the time of the idea to starting the research to writing and editing the book to its launch – I am clocking it at around 12 to 14 months a book. But now I am done… will take a break,” he says.

He presents the easy part of the challenge first. “Having so much of scholarship and having access to them in a lockdown digitally made it easy. Any study of Buddhism has this great advantage, it has always been friendly to scholarship.”

But the sense of urgency work was driven more by the emotional attachment, special empathy and passion for the subject than availability of material.

The book will be special every Indian because Buddha is in the Indian DNA. There is a Buddha in every Indian cultural context. Most Indian homes and public places have a carving or statue of Buddha. Yet, fascinatingly, this bond is cultural, not theological.

Buddhism as a religion, India’s greatest export to the world, besides yoga, has long been severed from India at large, but Buddha has a living presence. It is a localised Buddha, different in many a myriad ways from the Chinese, Japanese or Korean Buddha. Buddha, of course, has many incarnations and each land he has found a prominent place, has its version. The Lankan or Cambodian Buddha is known but even Afghanistan, Central Asia, even as far as Russia or Persia, we have Buddhist accounts. He is revered as Dalia Lama to the Tibetians.

Biography of a poem?

The poem, ‘Light of Asia’, by Edwn Arnold has a curious life and journey of its own. Published in 1879 by the English civil servant posted in India, the historiography of Buddha has had an epic impact, both in India and abroad.

It has been translated into multiple Indian languages – interestingly, sometimes as verse, at times as prose. It is popular in Gujarati, Sindhi, Hindi, Bengali and Tamil. Popularising the life and teachings of Buddha, it was published in Telugu, I found out, in 1902 as a poem titled, Buddha Charitaramu, by Venkata Shastry and Tirupati Shastry. It was commissioned by the zamindar of Pollavaram – Bahadur Kotcharlage Krishna Raju. The Punjabi translation is in prose while it is in poetry form in Hindi and Malayalam.

Sir Edwin Arnold’s poem, ‘The life of Buddha’ focuses on the humanity of Buddha not his divinity. This idea brought Buddha into global focus because for many of his followers, he was a preacher and a reformer, not a God. Sir C. V. Raman rated the ‘Light of Asia’ as one of the three most influential works of his life.

Sir Arnold was an extraordinary Info-phile. He was well versed of Mahabharata and the Gita Upadesha, which he composed as poems in 1885. The ‘Song celestial’, was the first avatar in which Mahatma Gandhi discovered the Gita, a text he always carried with himself till his death.

What makes Buddha’s appeal so enduring and universal?

In fact, the Church was very angry with the success of ‘Life of Buddha’. They commissioned Arnold to write one on Jesus Christ, ‘Light of the World’ but there were few takers.

The reason for the appeal of this poem, and the icon, was that during the times it was written, there was growing disenchantment with the church. The disbelief in God was increasing, with economic prosperity came inequality and people were looking for a system of personal morality, and beyond, for hope.

Buddha fulfilled the need. Everyone found in Buddha something they wanted, needed. Buddha as understood by Swami Vivekananda, Tagore, Gandhi, or Nehru were not same. But Buddha became to many an Indian at that time a figure to establish India’s spiritual superiority over imperialist England. The nationalist movement was seething with this feeling. They argued that we Indians may be have been subjugated by the West, but we are superior in civilisations terms and therefore we can interact from a positon of equality.

The reading of the poem and understanding its impact therefore necessitates that we do not, and cannot, divorce the content of the poem of its historic context.

So while Vivekananda and Gandhi saw in Buddha an icon of spiritual richness of India, there were others, looking for icons from our own history to establish a grounding for other ideas. Like equality of all humans. Social revolutionaries who attacked caste and Vedic orthodoxy from Sri Narayana guru or D. D. Kosambi and Dr B. R. Ambedkar. Thus was Buddha was simultaneously a spiritual, a cultural and a political icon. For reformers, Buddha was a figure who attacked the caste system.

There are many aspects to his teachings but in essence Buddha opened in a new way an old Indic wisdom – you can reach the divine through several ways, among them gyana (knowledge), yoga (meditation, self-realisation), karma (actions) or sanyasa (renunciation).

Buddha was preaching that you must be your own experiment, be your own lighthouse. You could follow Buddha without being a Buddhist. He provoked enquiry into the roots of social ethics and individual morality. He did not seem to say I have answers as much as I will encourage you to find your own answers. Be your own searcher. It was a very modern and scientific method.

In fact, after the contemporary animosity, by the eight century, Brahmins appropriate him and a century later, he was dubbed the ninth Avatar of Vishnu, possibly sensing the growing threat of Buddhism.

Consider this. Why did young prince Siddhartha abandon his kingdom? There are several views. One thread of history argues he was disenchanted by the war between various princely clans over water. After he failed to bring in reconciliations, he was vexed, a bit of a la Marxist aversion to status quo, which pushed him to seek a path of revolution of sorts.

At the spiritual level, Buddha enlightens us that Nirvana as a concept is not a negative but one which demands a positive and active engagement with life in all contexts. Most Indians build their worldview from our twin Hindu epics, Ramayana and Mahabharata. Buddha feels like a natural extension of several of these themes.

Today, and for the last century, we can violence rocking societies that accepted the Buddhist theology. Japan’s role in the World War II made them the darkness of Asia. There have been several other instances of political abuse of Buddha.

Both facets of Buddha are relevant today. Social reform is always incomplete. We have abolished untouchability but so much of discrimination still exists. I feel more connected to and inspired by the side of Buddha that spoke to Dr Ambeddkar.

Nehru loved Arnold’s ‘Light of Asia’ whereas Gandhiji was a lover of ‘Gita’, both by the same author. The English and several Europeans sensed in Buddha a kind of reformer, a kind of Jesus. He was a like a Protestant reformer to them.

But what is in little doubt is that Buddha was one of the greatest figures of human history, and Sir Arnold’s ‘Light of Asia’ one of the most important works of and for humanity.