How did Gandhi influence the heroes of Indian cinema? Journalist- turned author Sanjay Suri reveals to us at his book launch event in the city. 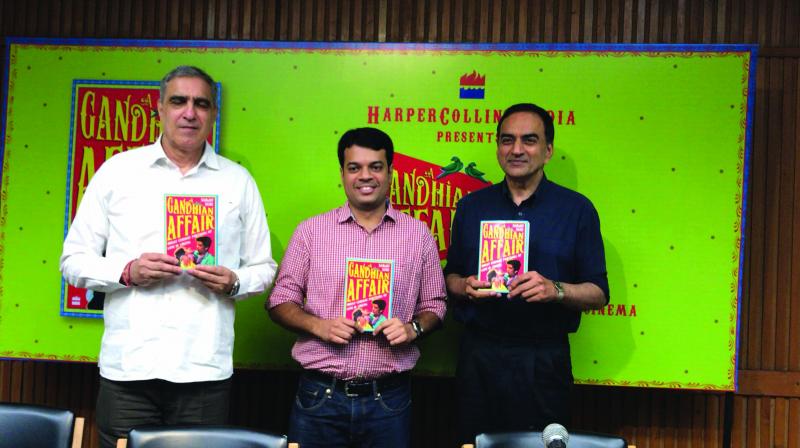 Back in the 1950s and 60s, the hero had to be tempted into having sex and celibacy was seen as a true mark of his heroism.

Out of his love for cinema and after watching hundreds of films, London based journalist Sanjay Suri figures out a relationship between Mahatma Gandhi, the towering hero of the Indian landscape, and the Hindi film protagonist, the towering hero of the fiction landscape. He points out Gandhi’s ideals and its influences on Indian cinema in his latest book, A Gandhian Affair. The book, which claims to study "India’s curious portrayal of love in cinema”, was launched in an event at the India International Centre on Sunday in the presence of the author.

Explaining the motive of the book, the author says, “I found a pattern staring at me in the face and this pattern has basically a few components. First is the constant need for the hero to duck away wealth and of sex, which seems to be in line with many choices that Gandhi made. The second element explains why the hero, in a conservative period, sacrifices sex in the story and only gets to express his desire for it through songs.” The plots of these movies revolved completely around sex and wealth, even though Indian society was heavily conservative. The final and third element to this pattern, according to Suri, was that in the 90s, a time when Manmohan Singh came into power and financial reforms took place, this whole pattern was reversed for the first time. It became perfectly alright for the hero to be guilt-free when it comes to amassing wealth.

Back in the 1950s and 60s, the hero had to be tempted into having sex and celibacy was seen as a true mark of his heroism. “The poor hero stays away from sex but the film does not. Everyone at that time wanted sex and wealth and everyone who went to the cinema was shown how bad this desire was,” Suri says. He highlights that cinema was bound by the “sense of morality” provided by Gandhi who, as a result, has had a long-standing career in Indian cinema.

Suri faced many challenges while writing the book. He shares, “Well, the first challenge was that this is a quirky subject and it seems a bit odd when you think of it. When we think of a hero influenced by Gandhi, it’s difficult to see the connection between the two.” According to him, the first challenge was to find the argument that proves the parallel and presents it convincingly, backed by evidence and not an assertion.

The author had worked on finding evidence from multiple Bollywood movies while researching for his book. He even presented stills from various films like Dhobi ki Zameen, Naya Daur and Do Aankhein Baara Haath as a part of his study of the annual highest-grossing films between 1948 and 1959. All these stills were relevant because of their presentation of Gandhi as the harbinger of justice and moral uprightness.