A present haunted by the sound of ghungroos from the past

The language is akin to the view from the top of a mountain, breathtaking in its rich imagery. 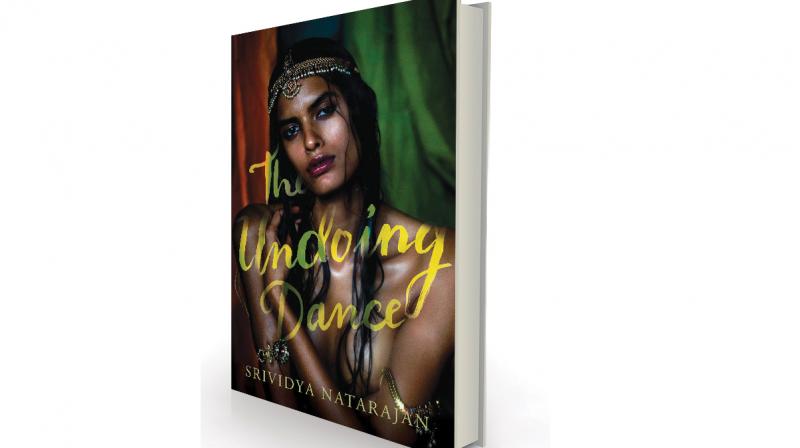 When my editor emailed me the blurb asking me if I would be interested in reviewing The Undoing Dance, written by Srividya Natarajan, I agreed instantly after reading the blurb. When the review copy landed at my doorstep I gulped. At 373 pages, the book is big and as it’s a hardcover edition it looks bigger. But brave me, set forth into the world created by Natarajan.

For me the first few pages were daunting, the names of all the devadasis went over my head and I had to keep referring to the first page to check who is who. Thankfully I circumvented that obstacle pretty quickly. I will make it easier for you all by telling you the names of all the main characters so that you all have the advantage that I didn’t have. The main characters are Kalyani, her mother Rajayi who is a devadasi, Kalyani’s husband Balan who is a big shot in NATAC (the National Academy of Traditional Arts and Culture) in South India and calls the shots regarding festivals both in India and abroad, deciding which dancers and musicians will be performing where. Then there is Hema, Balan’s daughter from his first wife, Vijaya- Balan’s mother and Padmasini a dancer eyeing the coveted festivals for a shot at fame and glory and monetary rewards. Then there are the various minor characters you will bump into during the journey.

The story is about Kalyani, the daughter of a devadasi. After Kalyani’s arangetram (first dance performance in the temple) a powerful man offers to be Kalyani’s patron, in short, her lover. To safeguard her daughter, Rajayi reluctantly allows Kalyani to be taken by Rachel Carstairs, a missionary who lives in Nallur. In the mission house Kalyani is taught English and other skills. But fate intervenes when Rachel falls ill and leaves the country, Kalyani once again has to return to Kalyanikkarai. But thankfully her smart aunty Lila takes her along to various dance recitals in Madras where young and beautiful Kalyani catches the eye of widower Balan who proposes to her.

Kalyani adopts the comfortable lifestyle as the wife of a wealthy arts promoter keeping her origins and her mother Rajayi hidden from the people of Madras where half the story unfolds. Leaving her mother to eke out her living in a derelict house on Musician’s Street, a locality in Kalyanikkarai, Kalyani is never at peace as the fear of the skeletons tumbling out of her past  haunt her. But when Padmasini, the middle-aged Bharatanatyam dancer, is offered a chance to film an artist, and she chooses Rajayi as her subject, the pandoras book of secrets threatens to spill open, turning Kalyani’s carefully built world topsy-turvy.

For many of us devadasi is a term that conjures up images of hereditary female dancers in Hindu temples. As these temples were under the patronage of kings and other rich men, the devadasis enjoyed the patronage of the kings, becoming their mistresses, often siring illegitimate children of their patrons.

The Undoing Dance is the story of a family of devadasis — 13 generations of singers and dancers starting with Annakili Naachiyar in the beginning of the 18th century in  Kalyanikkarai. We are given a brief history of the family tree, Rajayi’s mother Kanaka, Kanaka’s mother Jagadambal who was the Kalyanikkarai king’s mistress. Jagadambal’s mother Kalyaniammal who was the lover of another king Lingarayan III. But during the British rule the devadasis were rendered destitute and most of Kalyanikkarai’s dancers had lost their royal protection by the 1920’s and by 1950 they had to face shame and disgrace from society with common people shunning them, calling them prostitutes.

The Undoing Dance, told from many points of view — Kalyani, Rajayi, Padmasini, Hema, Vijaya, and Balan — is an exquisite piece of embroidery with each stitch a masterpiece by itself. The language is akin to the view from the top of a mountain, breathtaking in its rich imagery. Though the main character is Kalyani, but for me the character of Rajayi stood out with her indomitable spirit. I sat glued to the pages to see what would happen to this old devadasi. Would she succumb to her fate and break into pieces? Would she remain resolute against society and peoples’ pathetic treatment of her. Even the character of Hema stood out against the rest of the female ensemble cast. To keep body and soul together, Rajayi sells jasmine garlands twice a day in the temple. In Rajayi, Natarajan has created a memorable character that readers will root for and follow till the end of the story.

Books are the portals to new worlds, hurtling readers into territories unimagined. Books are also a ticket to a journey into an unknown land, with strange characters that over the course of the journey either become friends or remain strangers. It all depends on the skill of the writer and also on the story they have penned. And Natarajan takes the readers on a spellbinding journey.

The book straddles the two worlds of Kalyanikkarai highlighting the plight of the devadasis and other musicians who are thrown into poverty when their means of livelihood is snatched from them and Madras, where it turns the spotlight on the cultural scene full of scheming dancers out to grab their bit of fame. Natarajan’s sharp eye for detail captures the politics in the world of Bharatanatyam dance. I’m glad that I didn’t let the initial handful of pages turn me off, because if they had I would have regretted it. I would definitely recommend this masterpiece to everyone. Savour it, chapter by chapter, let the taste of this delicious literary feast serving a slice of cultural history, enthrall your taste buds.

Rachna Chhabria is a Bengaluru based children’s author and a freelance writer. Her latest book Festival Stories Through The Year (Harper Collins Children’s Books) has made her fall in love with our festivals, rituals and food.