A slickly produced work of non-fiction

The impact of his work over Tamil literature and culture has been huge, the author notes and shows how. 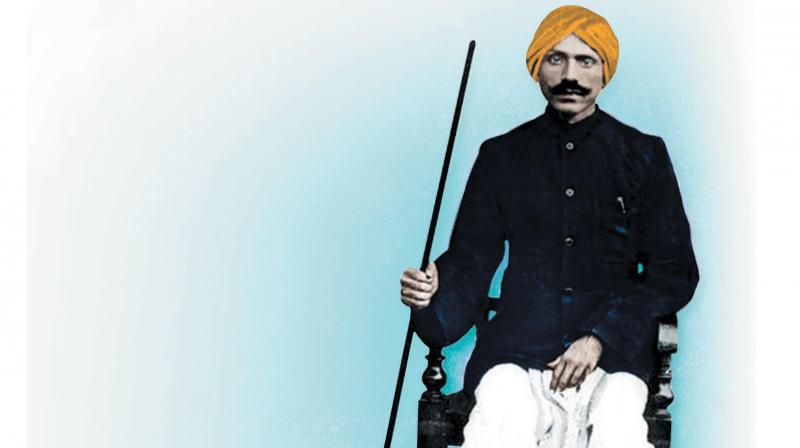 Who Owns that Song? by A.R. Venkatachalapathy, Juggernaut, Rs 599.

Subramania Bharati was to Tamil Nadu what Rabindranath Tagore was to (then) undivided Bengal: both were towering literary figures who shaped the languages they wrote in through their work.

Bharati, however, was a much more staunch nationalist than Tagore who opposed the British rule so fervently that he spent a decade in exile in Pondicherry which used to be a French-occupied territory and thus suitable for exile. Unlike Tagore, Bharati died in utter penury and received fame posthumously.

The most striking difference is in the reception of the two poets in the intellectual discourse over the years. While Tagore has received international fame — principally due to the Nobel Prize for a middling translation of Bengali verse that he received — Bharati’s fame is limited to Tamil Nadu. There is a street named after him in Lutyens’ Delhi but that is more or less about it. Is the usual North India bias of the Indian State to blame for this negligence? Quite possibly so. But it is also to be remembered that Tamil-origin scholars have also not written a lot on Bharati, despite his pre-eminent status as the poet laureate of the Tamil language, an ancient tongue.

Author A.R. Venkatachalapathy sets out to redress this egregious wrong in his slickly produced work of non-fiction and scholarly reportage called Who Owns That Song? and succeeds stupendously.

Venkatachalapathy, who teaches at the Madras Institute of Development Studies, selects an intriguing slice of literary history concerning Bharati as his entry into the life and times of the poet. After the death of Bharati, the first post-Independence government of Madras province made a stunning decision, which has not been replicated elsewhere in India till date and no luminary, including Gandhi and Nehru, have been bestowed with such an honour. The government of Tamil Nadu, following public pressure to “save” Bharati from being peddled for pecuniary gains by ambitious businessmen, chose to “nationalise” his work. This was a task of no small magnitude. It involved shrewd operators who knew the value of what they owned — rights to Bharati’s work sold for a pittance by his immediate family for financial succour during terrible distress after his death — self-anointed patriots and saviours of Bharati’s work, including Communists who held sway in the state back then, and a government which had taken charge fresh from agitating for freedom from the British, with Bharati’s songs on the lips of nationalists who led the charge and took up leadership roles later in the ministries.

We also get an insight into the development of cinema in Tamil Nadu as it was due to a tussle over using his songs as lyrics set to music in the movies that started the whole episode of “nationalisation”. Legal battles ensued and the matter soon reached the court of public opinion. Alarmed by the controversy and aware of the fervour among people for protecting the legacy of Bharati, the government moved swiftly to buy the rights to almost his entire oeuvre and published his works cheaply over the years.

Bharati was himself far from only concerned about Tamil Nadu. He had a wide range of scholarly interests and kept abreast of international politics — he was probably rare among poets of his time in penning a lyrical tribute to the Russian Revolution of 1917, seeing the hand of Goddess Kali behind it. He earned his living as a journalist, editing a nationalist journal for which he had to go into exile as its contents had displeased the British. Educated in Benaras in his youth, he had picked up nationalist ideas early enough in his life. He had but few patrons though his few associates were loyal to him. Bharati had to resort to self-publishing most of his books of poetry. His life was cut short due to poor health at a young age, at around 40 years of age.

The impact of his work over Tamil literature and culture has been huge, the author notes and shows how. Of course, the “nationalisation” of his work helped in popularising it to the general public to a great extent. Subsequently, the Tamil Nadu government continued the initiative, nationalising the works of other writers and poets in later years. This has also helped their families live with dignity due to the monetary help received. Certainly, this is a model that other state governments should look into and if possible, follow.

As far as the other concern remains, popularising Bharati outside Tamil Nadu is a necessary task as it would give a more comprehensive picture of the national movement to the country. The stinginess in crediting other parts of the country for winning India’s freedom is something that should be done away with. At the same time, not only Tamil-origin but scholars from other languages should also engage with Bharati’s work at their respective levels of expertise so that a great poet of India is accorded his rightful due.

Abhimanyu Kumar is a journalist based in Delhi. His first book of poems, Milan and the Sea, was released last year.