The book is divided into 13 chapters with each separately addressing an area that attracted the attention of the purveyors of fake news. 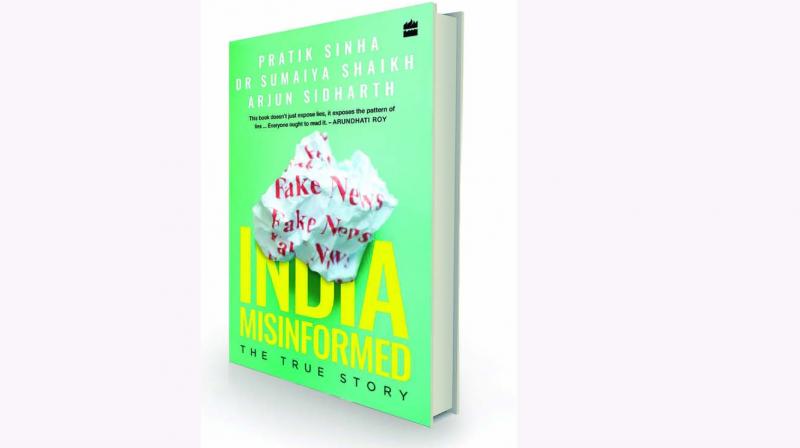 Blame it on the rise of the social media and websites disseminating propaganda, but six years ago, no one would have imagined that fake news would metamorphose into the dangerous cottage industry that it has become today. And to think that it all started rather innocuously with a picture posted on Facebook ahead of the 2014 general elections!

In what was an obvious attempt to hard-sell the Gujarat model of development, someone from the BJP had placed a photograph on the social media platform showcasing Ahmedabad's smart and efficient Bus Rapid Transport System (BRTS). The post was liked, commented upon and forwarded by thousands of supporters of Narendra Modi, although the image was from Guangzhou, China, and not from Gujarat’s erstwhile capital!

From that seemingly harmless beginning, the misinformation machine has grown into a dangerous hydra-headed monster that feeds the public fake news which spreads hate, stirs communal passions and incites mob violence. As things stand, the three main arms of social media — WhatsApp, Twitter and Facebook — are used by political parties as well as deviant doctors, quacks, 'journalists', godmen and associated conmen to disseminate a wide range of falsehoods. For politicians it has proven to be an inexpensive and effective tool to pump up their achievements while targeting their rivals and critics by painting them as debauched and debased individuals who are also corrupt and anti-national.

And backing the effort on social media are so-called news websites which elaborate on the misinformation through seemingly well-researched reports. They are in reality nothing more than tilted stories which push a line using false history and twisted data to mislead readers. What's worse, mainstream newspapers and TV channels have also contributed by following up and validating sensational stories that appear on such websites and social media.

Given the all-pervasive nature of the Internet, we have all been touched by fake news in one way or another. But what is the extent of the damage done? India Misinformed: The True Story, a timely and significant book penned by the team at Alt News, a fact-checking website that debunks fake information, tells us the shocking story of misinformation through select case studies it has documented thus far. What emerges is a Goebbelsian narrative set in the Internet age where photoshopped images, edited videos and fake reports convincingly spread blatant lies or half-truths among the gullible.

The book is divided into 13 chapters with each separately addressing an area that attracted the attention of the purveyors of fake news. These range from spreading communal discord, building brand Modi, targeting Rahul Gandhi and other Opposition leaders, attacking the BJP, discrediting celebrities and spreading disinformation relating to science and health. The book also addresses mainstream media, particularly 24x7 TV news channels, which is guilty of having become part of the problem by picking up dubious "exclusives" from the Internet.

India Misinformed can be best described as an anthology of fake news that Alt News spotted in the last two years, beginning February 2017. That was when the website, the brainchild of software engineer Pratik Sinha, started operations out of a room in Ahmedabad. Today it employs a team of professionals who keep track of news that comes into the public domain. The 82 case studies presented in the book are culled from the 1,000 instances the website has identified so far. It is, therefore, not an exhaustive listing but shows the extent to which misinformation has taken root.

Here are a few illustrative examples:
Communal twist to train tragedy: On October 8, 2018 a passenger train mowed into a crowd of Dussehra revellers standing on the railway track and watching the ritual burning of Ravan in Amritsar. The disaster killed 59 and injured over 100. The accident was instantly cited on the social media as “Train Jehad” committed by the Muslim engine driver, Imtiaz Ali. This news went viral and was retweeted by several right-wing leaders and by Twitter accounts followed by the Prime Minister and senior BJP functionaries.

It was later revealed that the engine driver was Arvind Kumar and there was no communal twist to the incident. However, Alt News found out that many users on social media who had circulated the false and malicious information did not delete their posts or acknowledge their mistake.

Love Jihad's alleged rate list: A “Love Jihad” rate list which spelt out monetary rewards for converting Hindu women to Islam (`6 lakh for a brahmin girl; ` 4,5 lakh for a kshatriya; `2 lakh for OBC/SC/ST) was first circulated on a blog in 2010. It made a comeback on social media in 2018 and enthused the news channel Times Now to run an “exclusive” on primetime followed by a heated discussion.

Alt News traced the story to the 2010 blog and discovered that the rate list story with fake images had appeared in several media outlets in the past. But for Rahul Shivshankar, editor-in chief of Times Now, it was a shocking expose of how “Love Jihad” was being promoted by the “Caliphate”.

Praise that was concocted: Quotes praising Narendra Modi's leadership attributed to the following - marketing guru Philip Kotler; Louise Richardson, vice-chancellor of Oxford University; Jim Yong Kim, till recently the chairman of World Bank, and Bill Gates, founder of Microsoft - have appeared frequently in social media and on some news websites. However, when contacted by Alt News, three of those quoted denied having made any such statement. Bill Gates and his office refused to comment although the quote attributed to him was never reported in the mainstream media.

Morphed photographs: A visual showing two contrasting photographs of Narendra Modi - one of him garlanding the bust of Mahatma Gandhi and the other of him paying floral tribute to Gandhi's killer Nathuram Godse - was circulated on the social media by the Prime Minister's detractors. The 2018 image was misleading. The second photograph was of Modi garlanding the bust of Deen Dayal Upadhyay, an RSS ideologue.
* A photoshopped image of Rahul Gandhi viewing the image of a bikini-clad woman on his mobile phone went viral on the social media last year. This was among the many fake photos and canards spread about the Congress president. But what took the cake were stills from the 1962 James Bond Film, Dr No, showing a bikini-clad Ursula Andress by the sea being passed off as pictures of a young Sonia Gandhi frolicking on a beach!

The book is packed with similar examples of misinformation that are oft-quoted in drawing room discussions. Critics of Alt News often accuse it of being anti-BJP and focussing too much on fake news coming from the right-wing Hindutva stable. But this is not true. The fact is that much of the falsehoods generated thus far have come from websites, Twitter handles and Facebook accounts sympathetic to the saffron party. But others are also trying to catch up in the “my news is as fake as yours” game, which is an unhealthy and worrying trend.

India Misinformed must be seen as an important document that records the darker side of news dissemination in the Internet age. The book does not editorialise and lets the facts speak for themselves. However, in trying not to take sides or “cause malice or harm”, very little is revealed about what keeps the wheels of the fake information machine turning and the people who fund and fuel it.

That, perhaps, was not the mandate of the book.