Serious students of genetics and medicine would no doubt still be exposed to Haldane’s work. 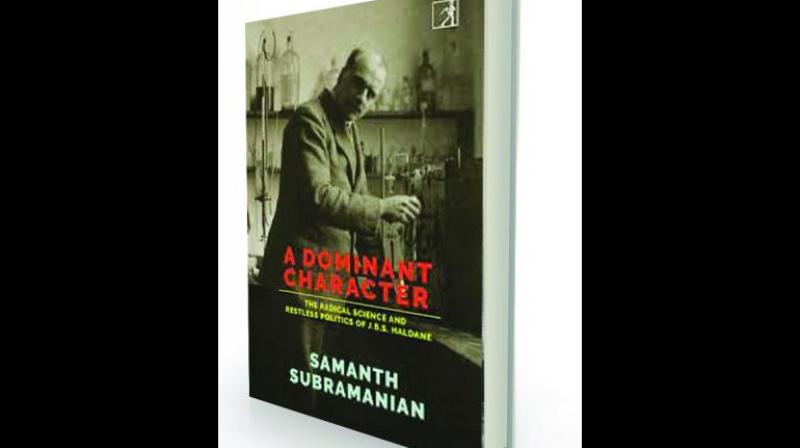 It is surprising that J.B.S. Haldane, a genius in his lifetime, no longer enjoys a place in popular imagination like say a Watson and Crick or a Stephen Hawking. And yet, during his prime (1920-1950) he was a colossus in the scientific world who contributed much to genetic science, physiology and biometrics. Not just that. Haldane was also a communicator par excellence who effectively unravelled the mysteries and complexities of science to lay readers through his newspaper and magazine columns. Celebrated sci-fi writer Arthur C. Clarke described Haldane as “the most brilliant scientific populariser of his generation”.

Novelist and physical chemist CP Snow rated him as the “most learned scientist of his time”, and philosopher Isaiah Berlin saw him as “one of our major intellectual emancipators”.

Serious students of genetics and medicine would no doubt still be exposed to Haldane’s work. After all, he was the one who provided a mathematical and statistical base for the theory of evolution and modelled the processes of natural selection and estimated rates at which gene mutations develop and spread through a population. His hypothesis on ectogenesis predicted IVF and cloning. Haldane also mapped the genes for haemophilia and colour blindness. The list does not end there…

Yet very few students of science would know that Haldane’s 1924 treatise, Daedalus, in which he predicted a future when humans controlled their own evolution through in vitro fertilization and mutation, provided the inspiration for the Aldous Huxley classic, Brave New World. In fact, Daedalus, was a much-discussed book in its time -Einstein owned a copy of it and underlined key passages in pencil and Bertrand Russell deemed it fit to write Icarus in rebuttal and bring out the horrors that science could unleash through its misuse.

So, who was Haldane? Journalist and writer Samanth Subramanian’s biography (A Dominant Character: The Radical Science and Restless Politics of J.B.S. Haldane) is an attempt to unravel the life and work of the brilliant scientist who was a man of many parts and contradictions. Thus, though he enjoyed an upper-class upbringing and lifestyle, Haldane was a committed Marxist and atheist who believed science could help fight inequities in a capitalist-fascist world.

Throughout his life he had disdain for the bureaucracy and yet worked on various occasions with the British government. As a man devoted to the scientific method, Haldane always swore by proven scientific data but gave the benefit of doubt to the pseudo-scientific genetic theories propounded by Soviet agronomist Trofim Lysenko. He did so because the Soviet government backed the scientist and it could not be wrong!

All this and more details of Haldane’s life comes together in Subramanian’s engaging 378-page biography of the man. The book scores on three counts —meticulous research, an energetic style of narration and Subramanian’s ability to place the narrative in the tumultuous political and social context of the twentieth century. Haldane’s life not only straddled two World Wars but also witnessed dramatic intellectual and ideological churning as well as rapid scientific and technological advancement. Subramanian, as the biographer, captures it all for the reader through a very objective bifocal.

It was a remarkable life that Haldane lived. Being born to a physiologist father with a laboratory at home meant that the he was exposed to research at an early age. He assisted his father — often doubling up as a human guinea pig in experiments or recording data and helping with calculations. The boy also travelled extensively through the districts with his adventurous father who did not hesitate to go down a mining shaft to record air quality or send his 13-year old son underwater off the Scottish coast to figure out how the respiratory mechanism could function best under pressure.

With a scientific baptism of this kind Haldane was perhaps destined to be scientist. And yet he never had a degree in science. At Oxford he obtained first class honours in mathematics and the Greats (classics) but he later went on to write papers in genetics which created a flutter in the scientific world. However, the outbreak of the First World War interrupted his scientific pursuits as he enlisted in the army.

It was in 1917, following an injury in the War, that Haldane was sent off to Pune to recuperate. He would return permanently to India with his second wife Helen Spurway in 1957. The scientist believed post-Independent India under Jawaharlal Nehru’s watch would be the ideal socialist, democratic and secular state to migrate to.

Haldane was 65 by then and had quit his job at University College London and joined the Indian Statistical Institute (ISI) in Kolkata to head the biometry unit. However, his stay in India proved to be tumultuous too. He first had differences with the head of the ISI and quit. Then an assignment with the Council of Scientific and Industrial Research fell through because he could not cope with bureaucratic wrangling. Finally, Haldane took up an offer from then Odisha chief minister Biju Patnaik to work out of Bhubaneswar. It was here that he breathed his last at the age of 72.

Haldane’s illustrious and restless life with all its brilliance, romance, politics, excesses and contradictions has been distilled into print in this unputdownable volume that deserves a place on any eclectic bookshelf.