It was basically divided into a recipe mode: ingredients, batter, heat, eating, coffee and a cig which on hindsight suited Kitty’s culinary passion. 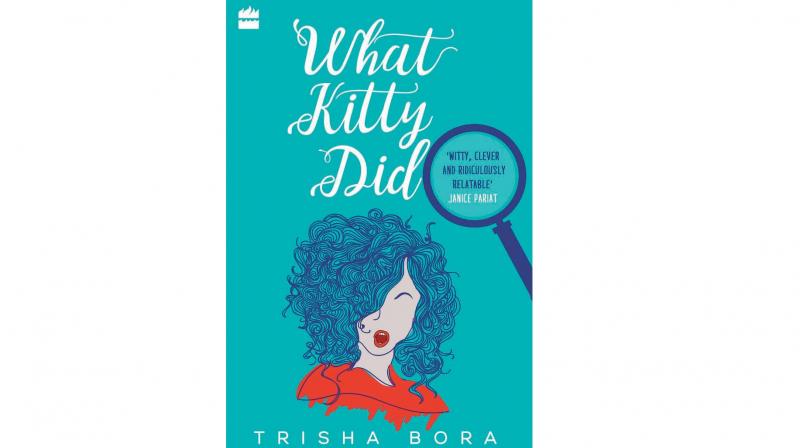 If you were to go by the title and the cover image (a girl with a wonky hair style suffering from a bad hair day) of ‘What Kitty Did’ by Trisha Bora you would dismiss it as a chick lit, and sadly miss out on Ms Bora’s sweet story and her amazing voice. It’s the story of 25-year-old Ketaki Roy, a journalist working at Poise- the fashion magazine and writing lifestyle pieces like finding love on Tinder and 10 quick ways to lose belly fat. Ketaki is a misfit, except for her baking talent (skills she learnt at her grandmother’s knees) she has little else going for her: a non-existent love life, a pathetic job and a salary that will give anyone the poverty complex. The book starts with Ketaki called Kitty by everyone, finding herself in bed with 59-year-old liquor baron Ronny Verma, Delhi’s pervert, after a heavy bout of drinking which happened during the opening of a restaurant called Terra. The next morning in her hurry to leave his house she leaves her coat behind. The reason I’m mentioning the coat again is because it acts as a minor character in the first bit of the book getting a whole lot of importance. Danny the editorial chief of Poise magazine assigns to Kitty the cover story, a four page write up on Roxanne (Roxy) Merchant the Bollywood actress who died after she suffered a stroke during a dinner party at her home, in front of her guests. Kitty has to interview a few of the six people present at the dinner: Roxy’s husband Dr Azian Merchant the cultural attache, their son Sorabh, Roxy’s best friend Delhi socialite Ayesha Shah and her husband the heart surgeon Dr Shah, Roxy’s sister Dinah Khan and Roxy’s lawyer Mr Sricharan and write an emotional piece accompanied by photographs of the actress. During her first interview with Dr Merchant, Kitty meets a lady whose identity she doesn’t come to know and Roxy’s lawyer Sricharan with whom she manages to strike up a conversation, even giving him her business card. She fixes up interviews with the other guests over the next few days. In the meanwhile Kamini her immediate boss throws a party where Kitty turns up drunk and gets more drunk, tripping over a giant fake taxidermy polar bear sending both her wine glass and cigarette flying and burning a fist sized hole in Kamini’s tapestry. The next day in office Miss Accident Prone Kitty is served her marching orders, she has ten days to write her feature and vacate her cubicle. To commemorate her firing, her friends Naz and Adi (Aditi) take her for a haircut to Naina’s, a salon run by Naina who also happens to be the woman Kitty haad met in Dr Merchant’s livin room. Naina strikes up a friendship with her, confiding to her that she believes that her good friend Roxy was murdered. Kitty and Naina play amateur sleuths and start investigating the case, by breaking into Dr Merchant’s house in his absence to search for clues and questioning Roxy’s sister and her lover Karan Singh. While Kitty and Naina go hunting all over Delhi, a lot happens in Kitty’s life, she gets a strange email from the taciturn lawyer Sricharan who is murdered a few days later, she also meets her mother’s friend son -the dishy Kabir Kaul. During the course of Kitty’s investigations she realizes that she is onto something big, that there was more to Roxy’s death that just a stroke. But the people she suspects are rich and famous with power behind them. Time is running out on her as her days at the fashion magazine are drawing to a close.  The book is peopled with a whole lot of secondary characters who jump out of the pages: her absent-minded father who teaches history, her social butterfly of a mother who made arty Bengali movies and had a social life more throbbing than her daughter’s, her jealous colleague Buddy, her friends Naz, Adi and her room-mate Rima. By adding a murder investigation Ms Bora elevates what would have been humdrum chicklit into zippy tale of suspense with a dash of romance. A lot of credit goes to her racy plot and her writing style which lends the book a distinct flavor; the tongue firmly in cheek writing and wicked humour make for plenty of laugh out loud moments. Her descriptions are hilarious with a unique vividity: she describes her boss Kamini as a Shahnaz Hussain and Bappi Lahiri hybrid, a large L-shaped white sofa - one that can accommodate a whole season of Simi Garewal’s guests, a tarot card reader in a white salwar-kurta with a Rip Van Winkle-ish touch about her, a brunch that goes on forever like an Ashutosh Gowariker film. Delhi is given the treatment of one of the characters of the book, its shopping places and food haunts is described in such luscious details that I was tempted to book my ticket to visit it. I had a couple of grouses, a chapter aficionado like me found it odd to read a book without chapters; it was basically divided into a recipe mode: ingredients, batter, heat, eating, coffee and a cig which on hindsight suited Kitty’s culinary passion.

Though I liked Kitty’s character a lot, I grimaced whenever she drank like there was no tomorrow and made a fool of herself.