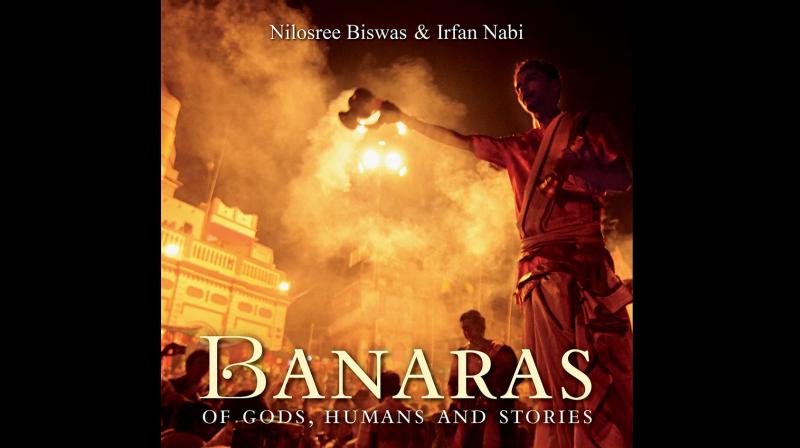 Cover page of Banaras: of Gods, Humans and Stories

What does the oldest living city of the world feel like up close and personal today? Sample this exciting biography of Banaras/Benaras/Varanasi that takes the reader on a veritable tour of sights, synapse firings, serotonin rushes and senses, what with the help of a selection of lush and arresting snapshots from the camera lenses of Irfan Nabi, the writers’ clever notes on musical traditions and confectioner’s delights, famed and less known, as well as those countless little precious arcs of unravelling mysteries threading the text like the gold and silver zari that adorns “every girl’s dream”, the banarasi sari. Part-history, part-travelogue and part-reportage, Biswas and Nabi’s extensive work traces the evolution of Shiva’s home by the Ganges, exploring the matrix of lanes, river ghats and temples, as also the akharas, craftsmen’s workshops, old families of the city and ascetic dens. All of which results in this go-to mini-encyclopaedia for all things “banarsi”. The mighty river punctuates the pages as it does the lives of everyone who resides here. It is like the raga that changes with the time of day and season but remains a constant presence in the recesses of one’s soul, if only one tunes in to hear it.

Banaras: of Gods, Humans and Stories (pp.230) by Nilosree Biswas and Irfan Nabi is published by Niyogi Books and priced at Rs.1,750.

A quirky ode to a riparian metropolis, with all its promises and follies, but which has undergone such a drastic change of face in recent times that its very name now sounds alien — to many, it is a misnomer, while representing even a travesty to some. This engrossing account seeks to document the political, sociological and market forces that continue to define and shape its present and future while recording personal history — the last memories of a beloved family member, now departed, and a hookup that organically melds together adventures in the seedy underbelly of the city with the sentiments and sensibilities of a modern global-Indian man. The effect is all too real and still irresistible in this masterfully told, humorous-and-wistful-by-turns, slim memoir of a great city.

A for Prayagraj (pp. 99) by Udbhav Agarwal is priced at Rs.399 and published by Aleph.