The many shades of Jehangir, a quirky Emperor

The third Mughal Emperor, Akbar the Great, built an empire which “grew so large and so rich that it might have toppled the balance of the world”. 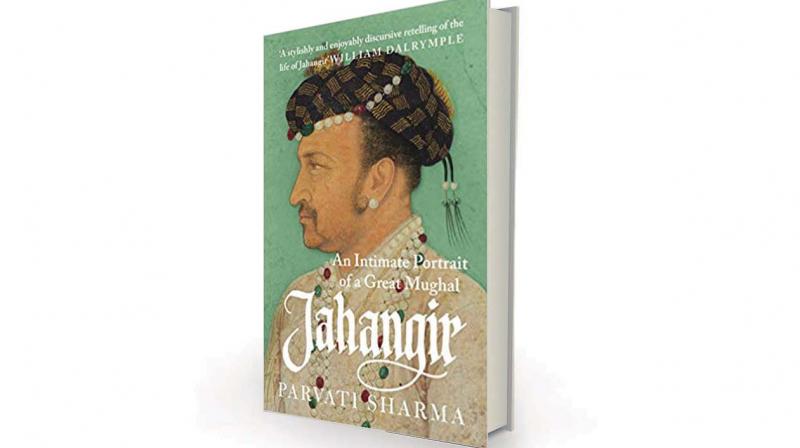 Jahangir: An Intimate Portrait of a Great Mughal by Parvati Sharma, Juggernaut, Rs 599

The third Mughal Emperor, Akbar the Great, built an empire which “grew so large and so rich that it might have toppled the balance of the world”. Shahjahan, his grandson, not only gave the world the wonder that is Taj Mahal (Rabindranath Tagore described it as a “tear-drop on the cheek of time”) but also, according to one historian “built the most glorious epoch in the Medieval period”.

Sandwiched between the two, the fourth Mughal Emperor Jahangir, who seemed to be largely of the view that the thing to do when you are at the pinnacle is to enjoy yourself, was understandably overshadowed both by father and son. Banish the thought however that his was some unidimensional, monochromatic, life afloat on imperial glory and abundance.

For Parvati Sharma, author of the book under review, “Of what interest is a man, let alone an emperor, who does not contain multiple truths?” writes the author of the book under review. So, Jahangir — “the man who could be spell-bound by a slant of sunlight upon a spring meadow, this was also the man who could watch without blinking as the skin was peeled off another human being (on his orders)” — was a subject quite suitable for Sharma’s literary-cum-historical exploration in Jahangir, An Intimate Portrait of a Great Mughal.

Taking no liberty with facts of history, and going beyond the glitter and glamour of the Mughal court, Sharma’s penetrating portrayal brings to life a man who is at once endearing and outrageous.

At age twenty-eight, Akbar had built himself a mighty empire to earn himself the epithet, Great. Now, all he pined for was a son. He prayed incessantly to Allah, pleaded with saints to intervene on his behalf. With the intercession of the Sufi saint Shaikh Salim Chisti, the emperor was blessed with three sons. Akbar named his first son Salim but fondly called him “Sheikhu baba”. Murad and Daniyal were Salim’s younger brothers.

As luck would have it, Akbar the great empire builder seemed far from being successful as a parent. Murad and Daniyal died fairly young thanks to alcohol abuse. Shaikhu baba too almost did. “Salim’s true romance, his lifelong passion wasn’t Anarkali, but alcohol”. What saved him was the “strength of will that he had inherited from his forefathers. Though “eternally drunk,” he could not wait to succeed his father.

Defying his father, he set up a rival court, rebelled repeatedly, renamed himself “Jahangir” (World Conqueror) long before the throne was his. At one point Akbar even suspected his Shaikhu baba to have tried poisoning him to death. Sharma wonders whether there was “something that bound them tightly enough to prevent the civil war that amirs on both sides were anticipating”, or “was it only the fortuitous combination of Salim’s laziness and Akbar’s age that prevented a conflagration”. In the end, Akbar died a natural death and Nuruddin Mohammad Jahangir, the light of faith, conqueror of the world, ascended “the throne he had gained by the breath of a hair”.

Emperor Jahangir’s 28-year reign is rich with details and anecdotes about his “multiple truths” for Sharma to record with literary flourish. Here are some examples:

During his reign, Jahangir promised two things to his subjects: justice and peace. He declared himself the “Adil Badshah” (Just Emperor). Justice delivery was swift though often brutal, even bordering on barbaric.

Continuing with Akbar’s policy of “Hindu appeasement”, Jahangir forbade animal slaughter on the day of his accession (Thursday), of Akbar’s birthday (Sunday), and, each year, for a number of days equal for a number of days equal to the year’s of his life, which naturally went on increasing year after year! In a measure that should please today’s gau rakshaks, cow slaughter was “strictly forbidden by the King on pain of death”.

In a balancing act to please the mullahs he banished certain un-Islamic taxes as also the production and sale of alcohol. The ban was practiced more in the breach by the Emperor himself as much as others. At the same time, not only did the Muslim emperor have no issues with others consuming pork, he “enjoyed receiving swine as gifts” as much as he gifted it to Christians. Muslim festivals such as the two Eids and Shab-e-Barat were celebrated with the same gusto by the royalty as Dussehra, Diwali and Navroz (the ancient Parsi New Year). The same Jahangir however, ordered the imprisonment and then killing of the fifth Sikh Guru Arjan Dev as punishment for siding with his rebel eldest son, Khusro. For all his tolerance of other faiths, the emperor prohibited Muslim women’s marriage to Hindu men.

Sharma’s book is replete with numerous examples of the contradictory, quirky aspects of the Emperor’s character. All the more reason why Jahangir’s is a personality most suited for Sharma’s engaging study. What must have been of great help to Sharma in putting her book together is also the fact that Jahangir had “a talent for writing (Jahangirnama) with infectious enthusiasm”.

To sum it up in her words: “In fact, seen through such discrete incidents, the emperor appears bafflingly contradictory in character — and yet, from the cracks between the anecdotes, there appears a man so wholly neither one thing nor another that he will not make sense when viewed through any one lens, but only, perhaps through a kaleidoscope.”