Stealthily, the enemy sneaked into paradise

Even as an old soldier, he experienced again the fear of climbing the rugged heights. 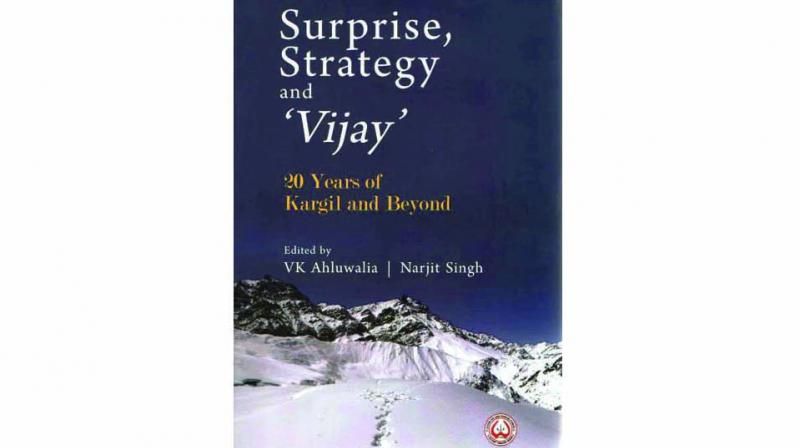 Five years after Operation Vijay, the unremitting onslaught unleashed to eliminate the deceitful Pakistani Army from the Kargil peaks, Lt Gen V.K. Ahluwalia, one of the co-editors of this book, was posted to command 8 Mountain Division, upon his own request. He admits that this posting to Ladakh “opened his vision to the bigger and brighter world of soldiering”. Soon after his arrival, he headed to scale the heights of the Tololing Complex. The place had been witness to the rawest form of courage displayed by soldiers who were part of the great assault undertaken in the face of the most intense enemy fire.

Labouring up the slope, gasping for air, Lt Gen Ahluwalia could not help wondering how our soldiers advanced to meet their objectives under vicious bullets and splinter bursts back in 1999. Even as an old soldier, he experienced again the fear of climbing the rugged heights.

Having spent over two memorable years in the midst of the Kargil heights in 2005-07, Lt Gen Ahluwalia considered it a privilege to gather sound knowledge of its formidable terrain. He had read books on the subject, by eminent writers – Captain Amarinder Singh, Lt Gen Y.M. Bammi, Maj Gen Ashok Kalyan Varma, Harinder Baweja, General V.P. Malik, and Nasim Zehra, a Pakistani journalist and author of From Kargil to Coup. All of them had detailed accounts of the operation. Every victory along the 170-km long rarefied mountainous terrain was achieved by surpassing new challenges that demanded from young leaders gritty shows of personal valour and leadership.

Between May and July 1999, bloody battles were fought concurrently in the five sub-sectors of Kargil – Mushkoh, Dras, Kaksar, Batalik and Turtuk. The war in Kargil will always be remembered as a saga of unmatched bravery. The Line of Control (LoC), delineated in 1972 by senior commanders from India and Pakistan, runs for approximately 220 km eastwards, beginning from Kaobol Gali.  This unseen line had remained quite intact and quiet for over 27 years, except for some artillery fire by Pakistanis, mainly to interdict the arterial road of National Highway 1A (NH-1A, now NH-1D), and also terrorise the local inhabitants of Kargil.

The LoC in Kargil runs along terrain varying in altitudes between 14,000 and 19,000 feet. This region was guarded by 121 (Independent) Infantry Brigade comprising a few units. Quite naturally, there were a few large unguarded gaps covered by foot patrol. A similar arrangement existed on the Pakistani side. However, all this changed in one stroke in early 1999, when Pakistani troops in civilian attire intruded through the unguarded gaps and occupied the mountain tops and ridgelines.  These incursions varied from four to 12 km inside India. Consolidation followed; improvised bunkers or sangars, defensive walls of stones and boulders with loopholes to fire weapons, were erected. This was followed by induction of heavy weaponry, ammunition, rations, et al. The Pakistanis established forward administrative bases inside Indian territory to sustain their troops. Artillery guns and heavy mortars were moved up close to the LoC to provide fire support. Like the ghost in the darkness, Pakistan had succeeded in giving India a tactical surprise.

By May 1999, when Indian Army reacted to this incursion by the Northern Light Infantry, the battalions of which had been raised by the Pak army specifically to carry out their Kargil misadventure, its troops had been well-entrenched for at least five months. Our officers, junior commissioned officers and fearless soldiers valiantly took on the back-stabbing Pakistanis. Not only did the Indian troops relentlessly attack uphill against a well dug-in enemy, but, fighting in the rare atmosphere, also managed to regain every inch of occupied territory. As the conflict progressed, the Indian Air Force, despite the disadvantage of being barred from crossing the LoC as per Prime Minister Vajpayee’s decision, reduced targets to ashes.

It is saddening to recall that when Prime Minister Vajpayee was making his bold gesture of bussing to Lahore and signing the Declaration on February 21, 1999, the Pak army’s Op Koh-e-Paima (Call of the Mountains) or Op KP, was well under way. It would be another three months before Indian Army’s Op Vijay would be launched. The irony is, in fact, the greater, for in Pakistan, Prime Minister Nawaz Sharif had been kept in the dark about Gen Parvez Musharraf’s ambitious plan. In her book, Zehra mentions that Sharif had no clue that Pakistani troops had already crossed the LoC and entered Kashmir. After the Pak army’s withdrawal, Zehra writes: “Musharraf had to face tough questions. Hasan, the Force Command Northern Areas commander, could not face his troops… Internally, there was disquiet after the withdrawal. Instructions were that Kargil would not be discussed in any school of instruction… Kargil was a taboo subject and remained so for a fairly long time.”

With a foreword by former Army chief General N.C. Vij, the book is structured into five parts. Part I, titled Blood, Guts and Glory, has a chapter by the same name authored by Narjit Singh, assisted by Raghunandan M.C. and Tejusvi Shukla. Part II, Synergy to Victory, has chapters Air War in Kargil: A Revisit by Anil Chopra, Artillery in Op Vijay: Perspective of a Commanding Officer by Alok Deb, Keeping the Enemy Air at Bay by Akhelesh Bhargava, Record Missions in Support: Army Aviation by B.S. Pawar, Sappers: Turning the Tide by Madhusudan Dave, Communications: The Battle Winning Factor by Narjit Singh, Op Vijay: Logistics Support in Testing Times by Sushil Chander and The Indian Navy: The Silent Response by Raghunandan M.C. and Shreya Das Barman. Part III, Perceptions And Opinions, has chapters Military Strategy in Kargil War by VP Malik, who was the Army Chief then, A Reminiscence: Kargil 20 Years after by Mohinder Puri, Defining Moments in Kargil Heights: GOC’s Perspective by V.K. Ahluwalia, Signals: 20 Years After Kargil by Rajeev Sabherwal, Lessons From Kargil Operations by P.K. Chakravorty, Paratroopers in Batalik by B.M. Cariappa and Random Musings and Reminiscences of My Tryst With Kargil: Operation Vijay and Beyond by Vivek Murthy. Part IV, Motivation, has chapters Lest We Forget by Saurav Pandey, Vikram Batra, PVC (P) by Ian Cardozo, Manoj Pandey, PVC (P) by Raj Mehta and Anuj Nayyar, MVC (P) by Rachna Bisht Rawat. Part V has chapters Emerging Challenges and the Way Ahead by V.K. Ahluwalia and Rajeev Kapoor, Honours and Awards and Conclusion by Narjit Singh.

It needs to be emphasised that Op Vijay was merely an intensified phase of Pakistan’s fourth war against India, which continues to date. The book’s coverage is well-rounded and will be very useful for all interested in national security and the complex subject of Indo-Pak relations.