Sherlock, Sexton — who is the greatest sleuth of all?

As with the fairy tale, it has been tempting for readers of detective fiction to rank a detective too as “numero uno”. 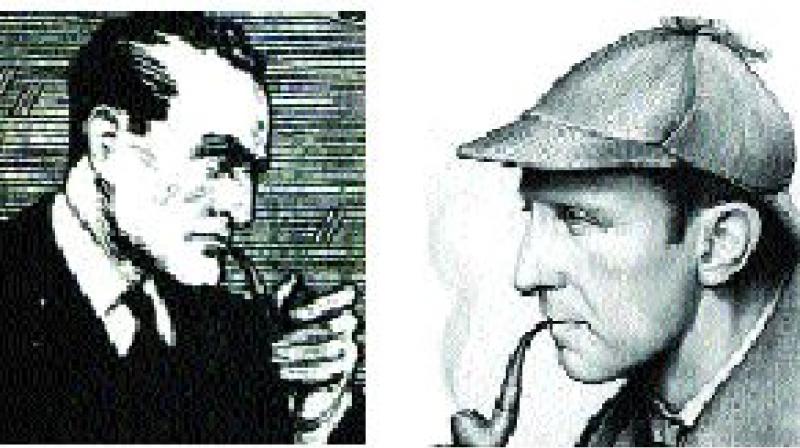 We all know the story of Snow White and the Seven Dwarves where the wicked stepmother constantly asks the magic mirror on the wall “who is the fairest among us all?” Dutifully each time, the mirror pronounces “you are, my fair Queen!” Till one day, the beautiful Snow White (whom the queen had believed to have been killed, comes of age, and the mirror pronounces her as the fairest.

As with the fairy tale, it has been tempting for readers of detective fiction to rank a detective too as “numero uno”. While many readers may undoubtedly feel that Sherlock Holmes was the best-known detective whose adventures continue to thrill, an opinion poll in the 1950s was conducted in England to discover the nation’s most popular detective. It would surprise many to know that, in this poll, Holmes was literally “pipped to the post” by a now largely forgotten character, Sexton Blake. A new book by a known Holmes aficionado Daniel Smith, Sherlock Unlocked, brings to light some lesser-known facts about the world’s greatest detective.

Published by Hachette in India at a very consumer-friendly price of `399 against the original UK price of £9.99 (yet another case of how imported books are cheaper in India) the book is a fascinating read. Many of us may not agree with the result of the opinion poll and my own re-reading of my copy of The Sexton Blake Casebook confirms it, yet Smith states some interesting facts. The creation of Sexton Blake who first appeared in a story in 1893 was a “very conscious effort to cash in on the success of Conan Doyle’s stories on Sherlock Holmes”. Even Blake’s own address was Baker   Street for a good part of his career. This “conscious effort” was a major attempt to outlast Holmes. For some 85 years, Sexton Blake was the face of an extraordinary franchise that extended across a genre, comics, short stories and books, radio, television and the silver screen. Very cleverly, the franchise owners made Blake change with the times too.

In an effort to immortalise him, Sexton Blake featured in about 4,000 stories, written by about 200 authors. My copy of The Sexton Blake Casebook is published by the Galley Press, has a 1987 print line and is compiled by Mike Higgs and billed as “a collection of adventures featuring the ‘other’ world-famous detective”!  It begins with The Mystery of Glyn Castle, first published in the Sexton Blake Library in 1923. Sexton Blake was effectively retired in the 1970s but there may well be a consensus among avid readers of this genre of writing that he was mostly forgotten before this and certainly more completely now in spite of plagiarising his appearance with the “deer-stalker, cape and pipe”.

There’s an interesting history to the Beeton Annual. First published by Samuel Beeton in 1860, it was made famous by his wife Isabella who published Mrs Beeton’s Book of Household Management in 1861 in it. This sold millions of copies over a number of years. After the death of the Beetons, the Annual was owned by the firm of Ward, Lock & Co. When Arthur Conan Doyle submitted A Study in Scarlet for publication, he had hoped to receive a royalty based on sales. This was rejected in a polite letter which stated “it may give rise to some confusion”. Conan Doyle was paid a flat fee of £25 for surrendering his copyright. The Annual sold out by the end of the month but not before establishing Sherlock Holmes as a household name. Today, only thirty-four copies of the Annual are known to have survived and a copy was last auctioned in 2007 at a price of $156,000!

The entire canon established Sherlock Holmes as the most famous fictional detective and Conan Doyle as the foremost author of crime fiction. This was acknowledged most graciously by famous writers of the genre. Agatha Christie who made her debut in The Mysterious Affair at Styles published in 1920 acknowledged her debt to her illustrious predecessor Conan Doyle. Reflecting on her autobiography on the character of the detective, she said, “There was Sherlock Holmes, the one and only. I should never be able to emulate him.” Yet, Christie allowed Hercule Poirot in The Clocks to state “it’s the author Sir Arthur Conan Doyle that I salute. The art of the writing, the pleasure of the language etc, but these tales of Sherlock Holmes are in reality far-fetched, full of fallacies and most artificially contrived”.

Dorothy L. Sayers, the creator of Lord Peter Wimsey who debuted in Whose Body in 1923 was also a fan. She produced a series of popular essays on Sherlock Holmes between 1928 and 1946. In 1954 she wrote a radio play for the BBC A Tribute to Sherlock Holmes on his 100th Birthday. Called A Young Lord Peter Consults Sherlock Holmes, it brought a young Wimsey and an old Holmes together for the first time.

E.W. Hornung, creator of the Raffles stories, also derived inspiration from Conan Doyle and after marrying Connie Doyle even collaborated with Conan Doyle on a play for Henry Irving. His stories centred on the character of Arthur J. Raffles, gentleman thief and enthusiastic cricketer. Raffles’s sidekick and chronicler was Harry ‘Manny’ Manders, very reminiscent of the partnership between Holmes and Watson. In all, Hornung authored 26 short stories featuring Raffles, two plays and a novel. His most famous collection The Amateur Cracksman was dedicated to Conan Doyle.

Conan Doyle thanked him and stated, “I think there are few finer examples of short-story writing in our language than these, though I confess I think they are rather dangerous in their suggestions. I told him so before he put pen to paper, and the result has, I fear, borne me out. You must not make the criminal a hero.”

Sherlock Holmes had friends in high places. Franklin Roosevelt was a passionate admirer and a member of the Baker Street Irregulars. Strangely, Adolf Hitler too was purported to be a fan though Doyle would have been horrified to learn this. It’s thought that Hitler kept a German film adaptation of The Hound of the Baskervilles in his wartime bunker. Neither Mao nor Stalin ever took kindly to Sherlock Holmes and there is no evidence that they read any of the stories. But later, the publication of the Russian translation of The Hound of the Baskervilles was extremely popular in Moscow. The lead actor Vasily Livanov in the popular The Adventures of Sherlock Holmes and Dr Watson on Russian television became a superstar and the statue of Sherlock Holmes in Moscow is based on him.

It was only when The Adventures of Sherlock Holmes was published in 1892 that the world realised who was it that had inspired Arthur Conan Doyle to create the iconic detective. It was dedicated by Conan Doyle “To my old Teacher Joseph Bell”. Bell had been one of Doyle’s teachers in medical school at Edinburgh University. Bell was famous among his students for an uncanny ability to pick up the smallest, inconsequential details to establish a person’s background.

Holmes elaborated on Bell’s method in A Study in Scarlet. “By a man’s fingernails, by his coat-sleeve, by his boot, by his trouser knees, by the callosities of his forefinger and thumb, by his expression, by his shirt-cuffs — by each of these things, a man’s calling is plainly revealed.”

While all this may have perplexed poor Watson and sounded very elementary to Holmes, we have two famous personalities in history who adopted methods which would have gladdened Holmes. One was Robert Baden-Powell who as a colonel in the Second Boer War exhorted the military to “read” the ground and terrain. Baden-Powell believed that there was a lot of Sherlock Holmes to be done in the armyman’s job. He was to go on to found the worldwide Scouts Movement. The other was the hunter-conservationist Jim Corbett who in My India gives a fine example of observation and detection while on the boat from Mokameghat. He was to later train the army.