Intimate impressions of some iconic Indians

The marigold story is just one among many observations Chadha makes about Indira Gandhi. 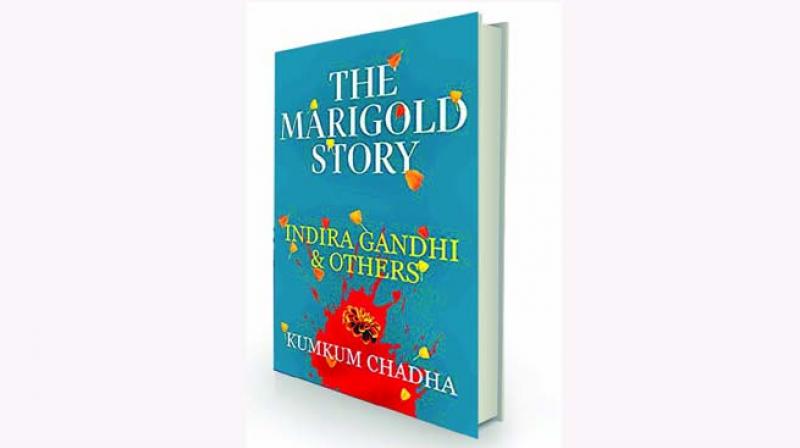 I must admit that it took me quite a while to really get into The Marigold Story: Indira Gandhi & Others by Kumkum Chadha. That's because the book is not easy to classify — you know better what it isn’t than what it is. For instance, it isn’t a book on India’s best known politicians. Neither is it a book about India’s best known celebs. Nor is it a heavily researched series of essays on some of the people who matter to India, but it isn’t quite a bunch of light anecdotes either. It delves into the recent past, but it isn’t really ‘history’, at least the way Ramachandra Guha would write it. Frankly, the book is quite a puzzle. So it’s fortunate that I can tell you that whatever you choose to classify it as, it’s fun.

Kumkum Chadha is what is called “a veteran journalist”, which means that she’s been working for a long, long time. This gives her thousands of stories to dine out on — anecdotes about people she’s known for years, people she’s built relationships with, people who other people are very interested in for various reasons. More than most journalists, she is fully qualified to tell us the stories behind the stories. For instance, was Sanjay Gandhi really as entitled and dictatorial as he is portrayed? How did Rajiv Gandhi go from Mr Clean to Mr Tainted By Bofors? What makes Smriti ‘Tulsi Virani’ Irani such an iron lady, and what makes Arun Jaitley the right man in the wrong party? What’s the story behind the many misspellings of Lalu Prasad Yadav’s name, how did Jaya Bachchan act her way into politics, what motivated Abhinav Bindra to aim for an Olympic gold, what was Smita Patil’s heart’s desire, was god-fearing Ekta Kapoor really once a problem child, why is Ajay Bijli’s surname Bijli, has L.K. Advani been harshly treated by the party he almost singlehandedly built up, and finally, what on earth do marigolds have to do with Indira Gandhi? These and many other questions are answered in the book, which Chadha says in the preface she wrote for her younger colleagues. Unfortunately, she adds, she never kept any notes, so the whole book is based more on her memories than anything else.

So what’s the marigold story? It’s really just an observation about Indira Gandhi who hated the flower so much that her staff was trained to keep marigold garlands far away. If the flower actually touched her, Indira Gandhi would throw a fit. Unfortunately, no one remembered this when Gandhi was laid out in state after she was assassinated in 1984. Her body was draped with piles of marigolds — exactly the flower she always hated.

The marigold story is just one among many observations Chadha makes about Indira Gandhi. Each chapter in the book is not only about the person in the title, but also the contexts in which these people worked and lived, plus anecdotes about the people close to our hero(in)es.

Abhinav Bindra’s story, for instance, is just as much about his parents as it is about him. The shooter who presented India with her first individual Olympic gold medal was incredibly lazy as a child, Chadha says based on conversations with his parents, and only took up shooting, because a) it involved no running around and yet took the pressure off him academically, and b) it would likely give him what he wanted: fame without hard work!

Ekta Kapoor’s chapter also relies a great deal on her mother for information; the day Chadha went to meet television’s enfant terrible, Ekta was more concerned about the health of her puppy than with telling Chadha things about herself.

In many cases, the chapters are fairly flimsy — honestly, I feel no sense of connection with the people concerned in the chapters on Ekta Kapoor, Smriti Irani, Amitabh and Jaya Bachchan, Ajay Bijli, and Arun Jaitley. The chapters on the Gandhi family are much more solid — Indira, Sanjay and Rajiv Gandhi come alive in these pages, so do Sonia and Maneka, and so do the bureaucrats who surrounded the Gandhis.

But it’s the chapter on Smita Patil that really touched me. Chadha clearly knew Patil as a friend, not a journalist, and the story of the late actress, her deep love for a married man, and her desperation for a child who ironically had to grow up without his mother really hurt.

Chadha deserves the greatest respect as a journalist, which is why I wonder why her publishers did not put their best editor on her book. There are errors throughout the book — not simply typos and proofing mistakes, but real actual mistakes that show a total lack of not only editing skills, but also English as a language.

I say this freely and fearlessly because by the time I came across the nth use of the word ‘incredulous’ instead of ‘incredible’, and ‘albeit’ instead of ‘at least’, not to mention the millionth grammatical issue just three chapters into the book, my inner grammar Nazi was so annoyed that I actually began marking my copy with a red pen.

Worst of all, the editor did not do even the most basic fact check on names that may have been unfamiliar to her or him — the French actress Anna Karina, for instance, is only mentioned twice in the whole book, but both times, she's been called Anna Karenina — and that means that much as I enjoyed the book, I don't trust it. And that is even after accounting for the author’s informality of approach — the fact that she wrote the book based on her memories.

Even so, you should read this book. Don't read it at a single stretch, instead snatch a few pages here and there between chores. You’ll be taken back in time, fascinated by the goings on in the lives of famous people, and better informed about milieu of India’s high and mighty. (And you can laugh your head off about Anna Karenina.)