‘You want to, but you cannot live in the past’

You want to but can’t live in the past, so you live with a pain that eats at you constantly. 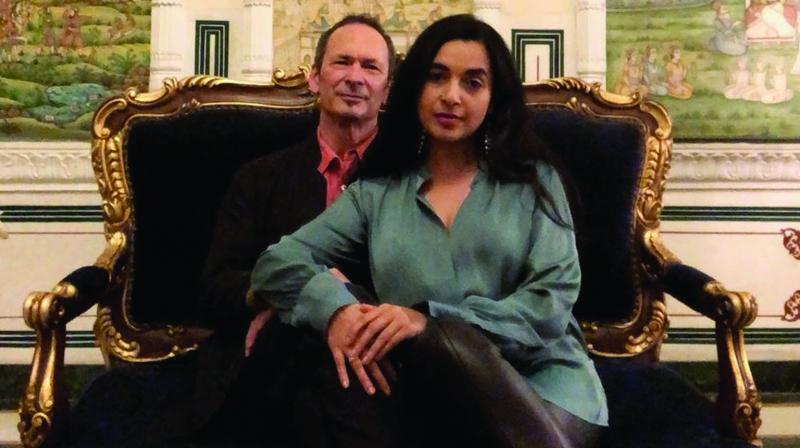 Forrest and Ashwini met a long time ago in Delhi at a literary event and stayed in touch. They collaborated while she was at artist residencies in California. This photo was taken in Jaipur during the litfest.

Forrest gander, poet, translator, essayist and novelist, won the Pulitzer Prize for
poetry in 2019 for Be With, a collection of poetry written in remembrance of his wife,
C.D. Wright, also a poet. Wright suddenly passed away in 2016. During an interaction with Sucheta Dasgupta on the sidelines of the 13th Jaipur Literature Festival, Forrest shared that he has found a new patch of creativity following his friendship with Ashwini Bhat, sculptor, who has helped him move forward.

As a pioneer of ecopoetics, how would you describe your knowledge as a geologist informing your writings?
Geology taught me how to look. When you look at a landscape as a geologist you have to see the large-scale features, the uplifting and the subduction, all the major things that will account for a mountain or a valley, but you also have to be able to see the crystalline properties in the shear zone and what’s going on there, and so the constant going back and forth between the large scale and the very particular has become an aspect of my own poetry. It’s how I tend to look at things, moving back and forth across scales.

Your poems are said to be highly stylised with their syntax, shape and line breaks expressing their message. How did you come to shape this form of poetry? What were your influences?
I don’t have a single shape. Every poem calls forth a different form. It’s by listening to the poem that you begin to feel the form take place. I’m interested in the line of a poem being connected to perception. A line gives you a moment of vision, and you can isolate things or you can run things together, and I am interested in the emotional energy of the line. Depending upon the emotional energy of the poem, the line will change.

How many languages do you speak and read? Which has been your most intensely enjoyable translation project?
I translate mostly from Spanish. I have translated a lot of Latin American writers. I focussed on women because they tend to be underrepresented in every country and in translation and because there is such good women’s writing in Latin America — Coral Bracho in Mexico, Veronica Volkow in Mexico, Alejandra Pizarnik in Argentina, Gabriela Mistral in Chile — she was Neruda’s teacher — Myriam Moscona. But the most enjoyable translation project that I worked on is of a Japanese poet named Gozo Yoshimasu or Yoshimasu Gozo, as they would say in Japanese. He is an artist and a performance artiste and a poet. He is probably the most influential avant-garde poet in Japan.

The central character, Les, in your critically-acclaimed first novel, As a Friend, is a gifted man with a certain knack for vulnerability that provokes similar self-examination from the people with whom he interacts. Did you have any person or incident in mind when you wrote Les?
I did. There was an amazing American poet who died at the age of 30, who wrote one of the longest poems in English, called The Battlefield Where the Moon Says I Love You, and he has a huge cult following in the United States. His reputation has expanded long after his death. The skeleton of the idea that I had for this book is based on his life. His name is Frank Stanford.

Do you think vulnerability and originality are qualities that are becoming increasingly rare in today's pat, accessible, all-knowing, globalised world?

Don't you? It seems it is so easy to protect ourselves with the armaments of technology, and we are less exposed to different points of view now. The media we can choose to attend to can be very narrow online. It can be very hard to remember that only by being vulnerable that we can be surprised, that we can learn things when we drop our defences — things that are very important in terms of how to live with other people and with other species.

You have lost someone very dear to you. Does grief, in its need to preserve memory, spell the end of new experiences and vulnerability? What is the connection between landscapes and grief?
You want to but can’t live in the past, so you live with a pain that eats at you constantly. In some ways, the light in my life is less substantial than it was before. But
in our deep relationships with others, our substantialness increases. In their absence, we can feel like a much smaller thing because it is relationships that make us what we are. So that grief has been and continues to be very powerful for me, and at the same time I have continued to live, and I have met someone now whom you just met — Ashwini Bhat with whom I have a new relationship. She is full of life and I was full of death and sadness, and that’s opened me up and made me vulnerable again to feeling things which I didn’t really even want to feel. I didn’t want to get over my grief.

This question is to do with your philosophy of international regionalism. As a geologist, how do you think geography affects the personality of a people, especially in relation to the works that you have translated?
A wonderful American writer who wrote a lot about Native American culture, Mary Hunter Austin, suggested that the places where we live affect our speech and our thinking. She notes, for example, that if you read Abraham Lincoln’s Gettysburg Address, you hear the rhythms of a man who spent a lot of time (in cold Illinois, where he lived) chopping wood. In the south in the United States, houses are built with porches. People sit on porches and talk to their neighbours walking by, and the porch is a place where people meet up. It’s commonplace in the US South that people will acknowledge each other when they walk past — unlike in many places in the North, New York for example, where people pass within inches of you without ever making eye contact. I think there are subtle ways that where we live affects who we are. Jaime Saenz, a Bolivian poet whom I translated, lived in La Paz and so, all his life, was conscious of the imposing mountain, Illimani, that presides over the town like some enormous toad over a scattering of ants. That kind of presence surely affects us in ways we can’t easily decipher.

You have been spending a lot of time in India lately. Who is your favourite Indian writer in any language?
I’ve been reading some ancient books, The Life of Harishchandra translated by Vanamala Viswanatha, the poetry of Andal translated by Ravi Shankar and Priya Sarukkai, and the Sangam poetry translated by A.K. Ramanujan. But among contemporary poets, I’m drawn to Arvind Krishna Mehrotra, Ranjit Hoskote and Biswamit Dwibedy. Incidentally, there has been a flourishing ofterrific Indian-American poets— and I follow a number of them hungrily, book by book.

Can poetry reverse climate change?
(Laughs heartily) I think the things that poets want poetry to do are important. But poetry doesn’t probably fulfil the intentions of many poets. But I think it does do something, sometimes on a small scale — making people aware of language that allows them to articulate emotions
that are more subtle, offering a way of seeing the world that’s perhaps in the case of ecology more integrated with human life. So in small ways it does change the world but it certainly won't save the world.